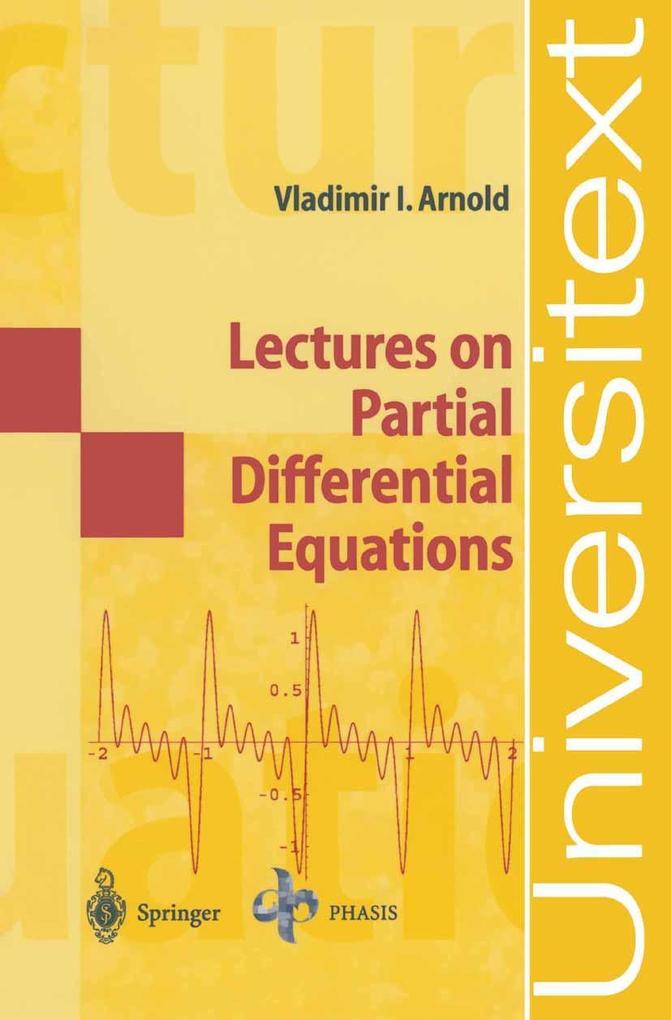 von Vladimir I. Arnold
Originaltitel: Lektsii ob uravneniyakh s chastnymi proizvodnymi. Auflage 2004. Sprache: Englisch.
Buch (kartoniert)
Like all of Vladimir Arnold's books, this book is full of geometric insight. Arnold illustrates every principle with a figure. This book aims to cover the most basic parts of the subject and confines itself largely to the Cauchy and Neumann problems … weiterlesen
Geschenk per Mail versenden
Buch (kartoniert)

Like all of Vladimir Arnold's books, this book is full of geometric insight. Arnold illustrates every principle with a figure. This book aims to cover the most basic parts of the subject and confines itself largely to the Cauchy and Neumann problems for the classical linear equations of mathematical physics, especially Laplace's equation and the wave equation, although the heat equation and the Korteweg-de Vries equation are also discussed. Physical intuition is emphasized. A large number of problems are sprinkled throughout the book, and a full set of problems from examinations given in Moscow are included at the end. Some of these problems are quite challenging!
What makes the book unique is Arnold's particular talent at holding a topic up for examination from a new and fresh perspective. He likes to blow away the fog of generality that obscures so much mathematical writing and reveal the essentially simple intuitive ideas underlying the subject. No other mathematical writer does this quite so well as Arnold.

1. The General Theory for One First-Order Equation.- 2. The General Theory for One First-Order Equation (Continued).- 3. Huygens Principle in the Theory of Wave Propagation.- 4. The Vibrating String (d Alembert s Method).- 5. The Fourier Method (for the Vibrating String).- 6. The Theory of Oscillations. The Variational Principle.- 7. The Theory of Oscillations. The Variational Principle (Continued).- 8. Properties of Harmonic Functions.- 9. The Fundamental Solution for the Laplacian. Potentials.- 10. The Double-Layer Potential.- 11. Spherical Functions. Maxwell s Theorem. The Removable Singularities Theorem.- 12. Boundary-Value Problems for Laplace s Equation. Theory of Linear Equations and Systems.- A. The Topological Content of Maxwell s Theorem on the Multifield Representation of Spherical Functions.- A.1. The Basic Spaces and Groups.- A.2. Some Theorems of Real Algebraic Geometry.- A.3. From Algebraic Geometry to Spherical Functions.- A.4. Explicit Formulas.- A.6. The History of Maxwell s Theorem.- Literature.- B. Problems.- B.1. Material from the Seminars.- B.2. Written Examination Problems.

From the reviews of the German edition:

"This book provides an introductory text (in German) to basic partial differential equations, based on the author's lectures at Moscow University. [...] Most of the standard themes are treated (see list below), but some unusual topics are covered as well. For instance, in chapter 10 double layer potentials are considered, and chapters 11 and 13 deal (among others) with Maxwell's theorem on the multipole expansion of spherical functions. The style of the book is quite non-technical (it contains almost no estimates), taking a mainly geometric viewpoint. [...]"

"[...] This excellent and stimulating textbook gives a beautiful first view on some basic aspects of the theory of partial differential equations and can be warmly recommended to any graduate student in mathematics and physics."

".....Arnold .. has long held a reputation as one of the world's leaders in dynamics and geometry. His Lectures survey big ideas; accordingly, he largely suppresses both the functional analytic formalism and the delicate estimates so characteristic of the subject. He takes the viewpoint that the most important PDEs arise in physics and the most important mathematical ideas contributing to their solution derive from physical principles.

Amold concentrates on the simplest equations of a given type and shows how the key ideas play out. For example, he attacks the general theory of one first-order equation, first via wave-particle duality, then via Hamiltonian dynamics. .... The author's stature and the book's lucidity make this an essential acquisition for all College libraries. ...."

"... Professor Arnold's Lectures on Partial Differential Equations is an ambitious, intensely personal effort to reconnect the subject with some of its roots in modeling physical processes. He does so in a lively lecture-style format, resulting in a book that would complement almost any course in PDEs. ...

As can be gleaned from the previous paragraph, we bouth found the book by V.I.Arnold most stimulating and thought provoking, leading to statements such as, "It has been years since I enjoyed a book so much" by RBG and "I cannot point to any other book in mathematics written with the same intensity" by EAT. ...

... what follows [...] is a beautiful book on PDEs, interwoven with the exposition of deep physical, geometrical, and topological insights that contribute to both the understanding and history of PDEs.

Prof. Arnold's book ... connects with the roots of the field and brings in concepts from geometry, continuum mechanics, and analysis. It can be used together with any book on PDEs and students will welcome its directness and freshness. We know of no other book like it on the market and highly recommend it for individual reading and as an accompaniment to any course in PDEs. ..."

"This book contains the transcripts of twelve lectures on partial differential equations ... . The presentation gives a vivid sense of what was actually said and discussed in the lecture course, and in this fashion the book differs markedly from many text books with similar titles. ... The author uses physical intuition to derive the various mathematical theories, and is thus able to explain the ideas ... in a fashion which is clear and helpful to both novice and expert."

"[...] In brief, this book contains beautifully structured lectures on classical theory of linear partial differential equations of mathematical physics. Professor Arnold stresses the importance of physical intuitions and offers in his lecture a deep geometric insight into these