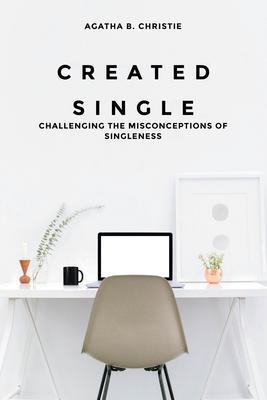 Are You Looking For Validation, Approval and Love as Single person whether male or female? If you're among the millions of single people who find themselves not appreciating where they are as individual, CREATED SINGLE will help you become appreciati

Are You Looking For Validation, Approval and Love as Single person whether male or female? If you're among the millions of single people who find themselves not appreciating where they are as individual, CREATED SINGLE will help you become appreciative of what God has made you to be; an individual fi rst. Social standard has taught us to embrace another human being in order to satisfy our happiness, daily struggle, peace and love. However, God says different. We were created in His Image and Likeness. We were born equipped to be whole individuals. You will…

• Discover the individual God has created in you, purpose and potential

• Appreciate the uniqueness of your singleness

• How To Love Self and acknowledge your worth

• How you can fall in love with God

• There is value to your singleness

• Living as a single individual and enjoying it

• Perfecting the inner you

A single individual who has lived the life searching for love and approval, Agatha B. Christie is committed to helping individuals find their uniqueness as a single person: married or single alike. She shares how through her experience that it's ok to be single and happy while living in a world where your singleness is discriminated on. Agatha Bernett Christie, is a media consultant in television production and a freelance photographer. Her credits including producing television shows, commercials, infomercials, directing stage plays, concerts, political rallies, conventions, conferences along with training in television production.

AGATHA BERNETT CHRISTIE has transformed the technical side of Television Production in the Bahamas by entering a man's world, as they would call it. Described, as a tenacious individual Agatha Bernett Christie is known for her "Go get it" personality. In 1988 Ms. Christie when to work at the Broadcasting Corporation of the Bahamas known as ZNS. There she started as a production assistant assisting where needed. In her love for photography and realizing that Media was her passion Ms. Christie was determine to learn more on the video side of production. In doing this she worked her way into an area where only men work, there was never a woman in this department call the ENG for the News Room. This was in the year of 1989. As she took on the challenge she was threaten by male counterparts that told her this is a mans world you are entering and we will treat you like one hoping she would not last long. With her determination to learn more about ENG and Cameras she took on the challenge and entered "a mans world". Ms. Christie was the first female in the Bahamas to be known as an ENG photojournalist or Camera Woman. No other female has taken on this challenge in becoming a Camera Woman in the area of ENG News. After long consul and thinking, she decided to qualify herself and pursue a Bachelors Degree majoring in the field of Television Production, which she has completed from the University of Oral Roberts in 1995. Upon her return home Ms. Christie immediately placed what she learned into the working field. She was now place into the News Room where she began Edited News stories for the 7pm News Cast and at times called upon to operate the studio cameras. During this time she was known for her precise work and professional approach at all time. She was the one to call on if you wanted the job done correctly the first time. After spending 15 years at the Broadcasting Corporation ZNS, Ms. Christie decided after much thought to venture out into another arena which would stretch her as a professional and a Media Consultant. this decision landed her a position at Bahamas Faith Ministries International Diplomat Media and Communication as Operations and Television Production Manager and Media Consultant for 14 years. Ms Christie has produced international and national Programs, Talk Shows, Commercials, Infomercials and Documentaries. Ms. Christie has worked and traveled closely with renowned speakers such as the late Dr. Myles Munroe, Benny Hinn, Maures Cerello, CeCe Winans, Les Brown, Bill Moss Jr. and many more. In love with what she does she has at all times maintain her level of excellence and diligence as it pertains to her work. Agatha has also setup and trained locally and international media houses for small and large churches who is interested in starting a television ministry or media house. Ms Christie is indeed a well-rounded individual that believes in a high quality of work, which produces a high level of appreciation from those she works for and with. Adding to her gifting in Media she's also a Freelance Photographer and a Toastmasters member.n her busy life of broadcast media she still found time to write this book "Created Single", Television Production Manual and a book on the late Dr. Myles Munroe; "BEHIND THE SCENE WITH DR. MYLES MUNROE AND THE PEOPLE WHO KNEW HIM."