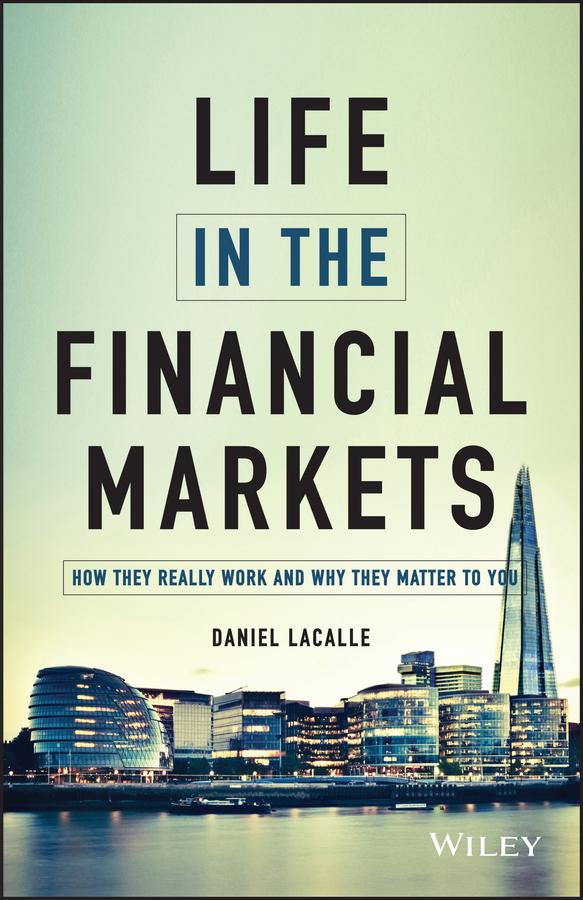 Life in the Financial Markets

von Daniel Lacalle
How They Really Work And Why They Matter To You. Sprache: Englisch.
eBook epub

An accessible and thorough review of the internationalfinancial markets

Life in the Financial Markets--How They Really Work AndWhy They Matter To You offers the financial servicesprofessional, and anyone interested in knowing more about theprofessio … weiterlesen
Dieser Artikel ist auch verfügbar als:
Geschenk per Mail versenden
eBook epub

Format:  EPUB
How They Really Work And Why They Matter To You.
Sprache: Englisch.

An accessible and thorough review of the internationalfinancial markets

Life in the Financial Markets--How They Really Work AndWhy They Matter To You offers the financial servicesprofessional, and anyone interested in knowing more about theprofession, an entertaining and comprehensive analysis of thefinancial markets and the financial services industry. Written byDaniel Lacalle--a noted portfolio manager with EcoFin andwell-known media personality--the book goes beyond a simplesummary and offers solid advice on the future of the globalfinancial markets. This great resource also includes a review ofeffective strategies and forecasts the trends that representpotential opportunities for investors.

The book reviews the recent history of the financial crisis andincludes information on hot topics such as derivatives and highfrequency trading. An in-depth section on investment banking iswritten from the perspective of a successful practitioner andprovides clarity on several complex and overly politicized elementsof the banking system. The author gives an expert's perspective onthe debt markets, monetary policies, and quantitative easing, andhelps explain the various issues surrounding sovereign debt, theEuro crisis, and austerity versus growth policies. Comprehensive inscope, this resource also offers an analysis of investment styles,from hedge funds to "long only" investments, as well as an in-depthlook at corporate communication and its impact on markets andinvestments.
* Offers an engaging and comprehensive analysis of the financialservices industry
* Includes information on the workings of the global financialsystem following the economic crisis
* Contains a review of complex banking systems

DANIEL LACALLE is an economist, fund manager andcertified financial analyst overseeing equities, bonds andcommodities. He holds a postgraduate degree in IESE and a master'sdegree in economy investigation. Mr Lacalle was voted Top 3Generalist and Number 1 Pan-European Buyside Individual in Oil& Gas in Thomson Reuters' Extel Survey in 2011, the leadingsurvey among companies and financial institutions.Author of twobest-selling books Nosotros los Mercados and Viaje a laLibertad Económica, now in its fifth and third editionrespectively, as well as The Energy World Is Flat (Wiley,2015, with Diego Parrilla).

Chapter One
Thinking against the box

We'd be delighted to make you an offer.

Liverpool Street, London, winter of 2005. They called me on a Thursday morning at my desk in an investment bank: Daniel, I've spoken to my associates, and they'd like you to come over to meet them and have a chat with some of the team. The voice at the other end of the line was Toby, a client and friend who was managing $1 billion for one of the world's biggest hedge funds.1

Of course, no problem, I replied, both intrigued and excited. When?

You have a reservation on the eight o'clock flight. So you'll arrive here tomorrow morning and you can make the most of the day, Toby said. We'll grab something to eat if you have enough time. Good luck.

If I have enough time? I wondered. What does he mean by that? Good luck? Well

I told my wife, gave the bank an excuse for taking the day off on the Friday, packed my bag and headed for Heathrow.

The flight wasn't bad. I'm lucky enough to be able to sleep anywhere, and I wasn't expecting too much from the interviews, so I watched an inflight movie called Lord of War, by Andrew Niccol and starring Nicolas Cage. I read a bit of Steven Levitt's Freakonomics. And I went to sleep.

A car was waiting at the airport to take me to the offices.

The building was impressive. A huge glass tower, in which the investment fund occupied four floors: one allotted to meeting rooms; another to the operations departments, otherwise known as the back office, where the accounting, legal, human resources and other services were located; and two floors for the managers, analysts and traders. No hierarchies, no committees, no eternal meetings. Almost 1,500 people to manage tens of billions of dollars, and one boss: the owner.

The founder of this investment fund was one of the few people I would dare call a genius. Like other renowned manag
ers of large hedge funds, he was known for his passion for mathematics and rigorous analysis, and his tendency to question established dogmas. He could absorb information like no one else, and he listened to everyone. His weapons were his obsession with work, and being alert 24 hours a day. And when something led him to make a mistake, he would get back on his feet, learn and become stronger. He began in the nineties while at university, with a little money loaned to him by his relatives. Instead of devoting himself to the big stock market party of those years, he went from bank to bank trying desperately to open short positions that is, to borrow a high-price share in order to sell it and return it at a lower price if stock prices fall (also known as short selling).

At that time, at the height of the dot-com boom, with the stock market rising 2% every day, this sounded like madness. In 2005, his fund was managing more than $10 billion, and he ranked among the top three highest-earning managers, receiving $1.2 billion annually (according to the Financial Times).

Upon my arrival, I saw some young men leaving carrying boxes with personal stuff. Leaving. A good start.

Give me six longs and six shorts was the first request that Dylan made of me. He was a mathematician who, according to company legend, had a photographic memory.

A long position (or long selling) is a traditional investment: buying a security in the hope that it will go up or will perform better than the market. Short selling means to short a stock as I described before. It's sometimes inappropriately described as bearish. This involves borrowing a security on interest, to then sell it, wait for it to fall or fair worse than the rest, buy it back again and return it to the broker. If the share has fallen, the difference is gained. But the chief aim of shorts, in fact, is to cover the exogenous risk of the long positions to mitigate the white noise effect that is caused b
y market volatility, also known as beta.

He was asking me to run a portfolio with an equal number of longs and shorts, which is what is known as a neutral portfolio one that's not subject to any stock market movements but generates gains if your personal analysis is correct, regardless of which way the stock market goes. This type of portfolio yields profits, for example, if the six longs fall but fall less than the six shorts. This strategy is known as market neutral, and it's my favourite, as it doesn't depend on Bernanke or Draghi or Merkel or Rajoy saying or doing anything in particular. We will discuss this at length in subsequent chapters.

The atmosphere in a hedge fund company is entirely unlike what we see in the movies. There are no men with glamorous hairstyles, wearing suits and braces, hollering into telephones. I was surprised by the silence and peacefulness of the environment. Most of the people were casually dressed. Most of the men were wearing polo shirts, chinos and white t-shirts. Everyone was doing their own thing: trying to make money. And there was I, like a jerk, dressed for a wedding.

All the analysts, managers and operators were communicating among themselves via Bloomberg instant messaging: an indispensable work tool for any manager or operator.2 Besides the hundreds of screens providing real-time data on the prices of anything, this service has an application, similar to WhatsApp, through which subscribers can communicate live. It has the advantage that all conversations are recorded, meaning that no one can say they have misunderstood anything. This makes it extremely useful for the financial regulators, be they the SEC (Securities and Exchange Commission) or the FCA (Financial Conduct Authority). All background communications are carried out using this chat service.

The interviews took place throughout the day. I came across mathematicians, physicists, physicians, former government officials, retired me
mbers of the armed forces I was asked questions of a professional and personal nature, over and over again, incessantly. No, I didn't get to eat.

The last interview was with the CIO, the chief investment officer. He asked me what I would do should I fail. I replied, Acknowledge it and try not to fail again. He asked me two more questions: What book are you currently reading? and What was the last film you saw? After I answered, he got up and left. I was convinced that I had completely screwed up and responded hesitantly. I was unsure if I had been consistent with my earlier statements, when I had been asked the same question two or three times. In the afternoon, a car took me back to the airport.

When I got home, I told my wife about what had been the most surreal experience of my entire life. I must say that, on the one hand, the atmosphere was unnerving. On the other, however, the opportunity to surround oneself with so many brilliant minds posed a thrilling challenge.

On Monday, they called me again. We'd like you to see some more people. Over the space of a month, I underwent a further six interview sessions, personality tests and all kinds of other tests. Clearly, they were looking for more than just a solid professional profile and a good knowledge of the market. They were searching for a specific way of understanding and analysing the world.

Then, suddenly, silence. I gave it up for lost.

One month later, while I was on a business trip to Copenhagen, the investment fund's head of human resources called me. We'd love to make you an offer.

From what I was told, their decision to choose me from among the other candidates, despite being older and having fewer years' experience in the City, was what they called an ability to think against the box. They were looking for someone who not only thought out of the box, and so could come up with solutions that were different from what most people could dream up for the sam
e problems, but also viewed problems and solutions in ways most never would.

I began to understand the reason for the diversity of profiles and why many of the successful managers did not come from traditional professional backgrounds. Alfred Winslow, credited as the original hedge fund manager, was a sociologist and journalist. Bill Gross the king of bonds studied psychology. André Kostolany read philosophy and art history. James Simons, of Renaissance Technologies, the world's most profitable hedge fund, was a mathematician. In many cases, the economist university degree and the typical master's degree don't help. Existing schools focus on orthodoxy, and a uniform, consensual, diplomatic, Keynesian vision of the economy. To be successful in an investment fund of this type requires a passion for the economy, but not orthodoxy or traditional analysis, and definitely not agreement with the majority opinion. It calls for seeing things from a unique point of view, and questioning established norms. This was how things such as the subprime, the sovereign debt crisis, the dot-com and housing bubbles were discovered....