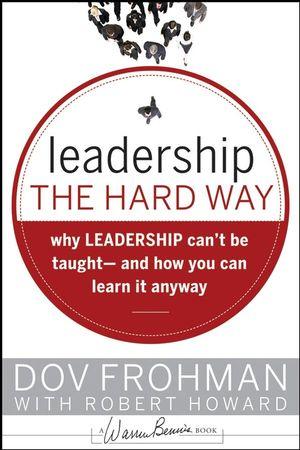 von Dov Frohman, Robert Howard
Why Leadership Can't Be Taught and How You Can Learn It Anyway. Sprache: Englisch.
eBook epub

Leadership the Hard Way presents a method of living and working that can truly facilitate the learning of leadership. Their method shows how to go against the current, fight conventional wisdom, and embrace the unexpected. It is about trusting onesel … weiterlesen
Dieser Artikel ist auch verfügbar als:
Geschenk per Mail versenden
eBook epub


Format:  EPUB
Why Leadership Can't Be Taught and How You Can Learn It Anyway.
Sprache: Englisch.

Leadership the Hard Way presents a method of living and working that can truly facilitate the learning of leadership. Their method shows how to go against the current, fight conventional wisdom, and embrace the unexpected. It is about trusting oneself and valuing intuition, principles, and imagination as much as hard skills and analysis. Frohman combines his counterintuitive ideas with experiences from his own background?from escaping the Nazis as a child to becoming a leading innovator in the semiconductor industry?to show how readers can build their own leadership abilities. A leader?s values and personality, he ultimately reveals, are the only sure source of stability in a world of continuous change.

Dov Frohman, a pioneer of the global corporation, is the founder and former general manager of Intel Israel and widely respected as a leader and innovator in the worldwide semiconductor industry.

Robert Howard is a former senior editor of the Harvard Business Review. A veteran writer on work, technology, and management, he is the author of Brave New Workplace and the editor of The Learning Imperative: Managing People for Continuous Innovation.

Introduction: Flying Through a Thunderstorm

Few subjects have so preoccupied the business world in recent years as that of leadership. Witness the explosion of articles, books, training courses, and programs purporting to teach managers how to lead. Since the early 1990s, for example, the Harvard Business Review has published some 350 articles on the subject of leadership—135 of them since 2000 alone. Recently, one of the world’s leading financial-services companies, Merrill-Lynch, began publishing an entire magazine devoted to the topic.1 Initially targeted at the company’s senior-management ranks, the magazine aims eventually to attract a broad senior-executive audience. And where business is going, the academy is never far behind. Leadership has blossomed into a whole new field of study. At some universities, you can even get a Ph.D. in it!2

I’m sure there is at least some value in all these efforts. But I’m skeptical that they will produce more or better leaders. Indeed, at the very moment that we are seeing so many efforts to teach leadership, we are also experiencing widespread and continuous failures of leadership—and not just in business but in politics, education, and other institutions of modern society. Corporate fraud brings down high-flying companies such as Enron. CEOs are driven from office due to unethical, and probably illegal, practices involving the backdating of stock options. In the United States, at a time of new and unprecedented global crises, a so-called “MBA president” oversees what many see as one of the most incompetent and corrupt administrations in modern history. And in my native Israel, polls suggest that leading politicians and military leaders have lost the confidence of the nation over the way they sleep-walked into the 2006 summer war with Hezbollah. In short, there is a growing disc
onnect between our celebration of leadership and what appears to be our systematic inability to practice it.

In my opinion, a major reason for this disconnect is that most of the conventional wisdom about leadership today is, not wrong exactly, but surprisingly irrelevant to the true challenges and dilemmas of leading in today’s economy and society. The claim of so many of the articles, books, and programs on the subject seems to be that leadership is largely a matter of technique, a set of skills that can be taught. If you read the right books or take the right training courses, it should be relatively easy—indeed, straightforward—to become a leader.

My thirty years on the front lines of the global economy have taught me that precisely the opposite is the case. I believe that learning how to lead is more in the nature of cultivating personal wisdom than it is of acquiring technical skills. No matter how much training you have or how many books you have read, nothing can fully prepare you for the challenge. In this respect, leadership isn’t easy; it’s difficult, necessarily difficult. And the most essential things about it cannot really be taught—although, in the end, they can be learned.

I’m an active pilot, so allow me to draw an analogy with learning how to fly. When I decided in my fifties to become a pilot, I took lessons from the retired former head of Israel’s Air Force Academy. He was in his late sixties at the time; he is still flying today in his eighties! A daredevil fighter pilot but a strictly by-the-book instructor, he taught me the basics, what I like to think of as “Flying 101”: how to take off, navigate, read the instruments, make a landing, and so on. He gave me the confidence that I could actually do it. But he would never let me make my own mistakes. Whenever I did something wrong, he would immediately take over and
tell me what I needed to do to take corrective action. As a result, I may have learned the basics of flying, but my knowledge was abstract, and I was far from being an experienced pilot.

Later, when I bought a more advanced and technologically complex airplane, I had a second teacher who trained me on the avionic systems of my new plane. In contrast to my first teacher, he took a far more intuitive approach. When we went flying together, he seldom intervened in the process. Rather, he stressed a set of simple decision rules—and then let me go ahead, make my own mistakes, and figure out how to recover from them. This taught me how to start integrating the theory of flying with the practice of actually piloting a plane.

Yet neither of these teachers really prepared me for the moment I experienced a few years later when I was caught unexpectedly in a sudden thunderstorm over the southern coast of Greece. I was traveling with my family from our home in Jerusalem to our vacation home in the Dolomite Mountains of Italy. I had had my pilot’s license for about four years and at the time was flying frequently, at least once or twice a week. So I felt confident about making the long trip. In addition, my son, who was twenty-five at the time, also had his pilot’s license (although he was not qualified to fly the particular model of plane that I owned, a single-propeller Beechcraft Bonanza).

The first leg of the trip from Israel to the Greek island of Rhodes was uneventful. And when we took off from Rhodes en route to Corfu, where we were planning to spend the night, the weather was fine. But as we headed toward Athens, we encountered an unanticipated obstacle. The air traffic controller at the Athens airport informed us that there were flight restrictions for small planes over the Athens metropolitan area. So we had to change our flight plan and take a more southwesterly route skirting the southern coast of Greece’s Peloponnesian pe
ninsula.

My plane is equipped with a device known as a stormscope—an avionics instrument that looks like a radar screen and uses data from electrical discharge signals generated by lightning in the atmosphere to create a 360-degree map of areas of severe weather in the plane’s vicinity. We began to notice indications on the stormscope of a major storm almost directly in our path, about fifty miles to the southwest and approaching quickly.

In a matter of minutes, the sky started clouding up. Soon heavy rain, and then hail, began hitting the windshield. Thunder pealed and long streaks of lightning shot across the sky. Before we knew it, we were in the middle of the storm. Enormous updrafts and downdrafts grabbed the plane, pulling it up and down two thousand to three thousand feet at a time. The turbulence was gut-wrenching. Helpless, I watched the altimeter circle furiously, first in one direction, then the next.

In his classic 1944 book about flying, Stick and Rudder, test pilot Wolfgang Langewiesche makes the observation that “what makes flying so difficult is that the flier’s instincts—that is, his most deeply established habits of mind and body—will tempt him to do exactly the wrong thing.”3 The first impulse of an inexperienced pilot facing a sudden thunderstorm is to turn around and go back. Sometimes that can actually be the right thing to do—if you have sufficient advance warning. But if a storm comes up quickly, turning back can be dangerous. Turning requires banking, and banking accelerates the plane with the nose down. If the storm winds are strong enough, they can force you into a dive, causing the plane to stall and go into a spin. Without really thinking about it, I realized immediately that it was far too late for us to turn back. There was really no choice but to plow ahead.

Another common impulse when flying through a thunderstorm
is to fight the turbulence, to try to correct the violent updrafts and downdrafts by pushing down (or pulling up) on the controls. But that is a critical mistake, because it can lead to such stress on the wings as to cause the breakup of the plane. Rather, surviving extreme turbulence requires another counterintuitive trick: instead of fighting the turbulence, a pilot needs to let it happen. Believe me, it is extremely difficult to consciously make this choice. We were flying over high mountains. I had no idea how low the downdrafts would take us. But there was nothing to do but just let it happen. I struggled simply to keep the wings level as the violent updrafts and downdrafts took their course.

After about fifteen minutes (which seemed like a lifetime) on this aerial roller-coaster ride, my son, who was monitoring the stormscope, saw a break in the storm to the northeast. We radioed Athens for a change in course, and within about five minutes things began to calm down. Then, with no warning, we shot out of the clouds, and almost as quickly as the storm had developed, it passed. We flew on, chastened but relieved, to Corfu. That night we learned from the news that a small Greek passenger jet, also caught in the storm, had experienced an especially violent drop of more than ten thousand feet. Five passengers who had neglected to fasten their seatbelts were killed.

In the years since, I have often wondered precisely how I got us through that storm. The answer is: I don’t really know. To be sure, I had taken courses about flying in bad weather and had learned what to do and what not to do. But once I was in the middle of the storm, those lessons were far from my mind. There were too many contingencies to handle in too short a period of time to apply those lessons systematically. Instead, my reactions were immediate—rapid responses to the developments of the moment, driven by my realization that our very survival was at...