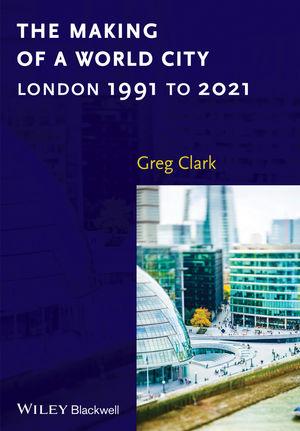 The Making of a World City

After two decades of evolution and transformation, London had become one of the most open and cosmopolitan cities in the world. The success of the 2012 Olympics set a high water-mark in the visible success of the city, while its influence and soft po … weiterlesen
Dieser Artikel ist auch verfügbar als:
Geschenk per Mail versenden
eBook epub

Titel: The Making of a World City
Autor/en: Greg Clark

After two decades of evolution and transformation, London had become one of the most open and cosmopolitan cities in the world. The success of the 2012 Olympics set a high water-mark in the visible success of the city, while its influence and soft power increased in the global systems of trade, capital, culture, knowledge, and communications. The Making of a World City: London 1991 - 2021 sets out in clear detail both the catalysts that have enabled London to succeed and also the qualities and underlying values that are at play: London s openness and self-confidence, its inventiveness, influence, and its entrepreneurial zeal. London s organic, unplanned, incremental character, without a ruling design code or guiding master plan, proves to be more flexible than any planned city can be. Cities are high on national and regional agendas as we all try to understand the impact of global urbanisation and the re-urbanisation of the developed world. If we can explain London s successes and her remaining challenges, we can unlock a better understanding of how cities succeed.

Greg Clark is a Londoner and expert on world cities. He works asan advisor to OECD, World Bank, Brookings Institution, ULI and morethan 20 major cities around the world (including Auckland,Barcelona, Brisbane, Cape Town, Hong Kong, Johannesburg, Moscow,New York, Oslo, Rio de Janeiro, São Paulo, Singapore, Sydneyand Toronto) but learned what he knows from working in London as aleader in city agencies during the period covered by this book. Hehas written four books for the OECD and several published reportsfor the Brookings Institution, British Council and ULI.

In 1991, the London Planning Advisory Committee published London: World City Moving into the 21st Century (hereafter London: World City). The content of this report was groundbreaking, and its impact on London's business and policy community considerable. It is no exaggeration to describe it as helping to usher in a new chapter in London's 2000-year history.

Published at the beginning of a new era for an enlarged global economy, London: World City recognised London's evolving role as an international urban centre. Its authors identified growing competitive pressures as other European, North American and East Asian cities proactively pursued internationalisation, and sought hub status among firms in financial services and other sectors of strategic significance. The report, researched and prepared through dialogue with a wide range of experts and overseen by London's local government and business leaders, argued strongly for London to adopt purposeful measures to promote itself internationally.

Honor Chapman, a towering figure in the city's real estate industry and a pioneer in applying the tools of competitive business analysis to the world of commercial real estate, applied this approach to thinking about London's competitive position. During 1992, she led a detailed study at Jones Lang Wootton on how London could respond to the new global challenge. A year later, this work was adopted by the newly-formed business leadership organisation London First, and detailed work began to be undertaken to prepare London's response. With support from central government, and with backing from the City of London, the City of Westminster, London Docklands Development Corporation and others, London First created London First Centre, a new inward investment centre (now integrated with London's tourism and higher
education promotion and known as London & Partners). Honor Chapman was appointed its first Chief Executive, serving for three years before joining its Board as a non-Executive Director.

The premise of this book is that the activity and vision of Honor Chapman and London's business and real estate community helped steer London into a new cycle of internationalisation which was crowned by the 2012 Olympic Games, and whose effects will see London's population likely reach a landmark nine million for the first time in 2021. In the intervening period, the city became a place of unique appeal. It experienced exceptional demand for investment opportunities and corporate locations, for its labour market and higher education institutions, and as a destination of entertainment and culture. London's civil society, political leadership and commercial stakeholders all fostered an unprecedented global reach and cosmopolitan identity. In doing so, they have reaffirmed the city's open and organic character, in which change occurs in incremental, unexpected and exciting ways.

In 2015, with the Olympics now a fond memory and a new global business cycle well under way, there is a consensus that London is once again moving full steam ahead. But with a new cycle comes new challenges. London's historic strengths, and its progress since London: World City, will not, on their own, be sufficient to guarantee success in the medium-term future. Success has brought with it a new set of tasks, the unintended consequences of getting other things right. The nature of the challenges has changed, the emerging global system of cities is different to that of 1991 and many more cities are empowered to compete. The city development tools of the late 20th and early 21st centuries have proved to be effective only for certain problems. As such, London's model of success is incomplete, because it has not yet shown the capacity to manage and accommodate the growth that accompanies
the additional demand stimulated for a thriving world city. The research and interviews conducted for this book have revealed an imperative for the activation of a new phase of innovation and ambition, especially (but not only) in the areas of governance, investment, housing and structural disadvantage.

The impulse for a new and positive direction for London is driven by competitive challenges: challenges to practically every role that the city plays, and from a larger number of competent urban service providers than ever before. In this book, three dimensions to this external landscape of competition are highlighted. First, other leading cities are addressing their own development challenges with new verve. New York, Paris, Hong Kong, Tokyo and Singapore are all formulating new niches, metropolitan solutions and development paths. Second, the principal cities in the fastest-growing markets now offer provision that overlaps with London in ways not previously anticipated. Dubai is now a world-class hub for aviation and Islamic finance, Shanghai a new banking and trading powerhouse, and Mumbai a capital of creative industries. Third, established European business cities such as Stockholm, Zurich, Munich, Amsterdam, Frankfurt and Basel offer attractive alternative locations in fields where London has been seeking to grow its role, such as environmental technologies, digital innovation, life sciences and design.

This book argues that London has highly distinctive, indeed inimitable, attributes that make it more resilient than most to the caprices of global competition. But it is nevertheless a reality in 2015 that many urban centres within and beyond Europe have the capacity to invest more, to deliver major developments faster, to coordinate and manage growth better, to address inclusion more effectively, and to draw on consistent and long-term financial flows and instruments. As I detail in Chapter 5, London's incremental governance empowerment has achiev
ed significant outcomes, but there has not been sufficient progress to ensure the city's current demand bubble is translated into a commercial, social and environmental sustainability.

The concluding section of the book details the central aspects of London's current model whose modification may impact on the city's future success. Three of these elements are mentioned here. First, London's business environment has been a forceful driver of growth since the mid-1990s, but it is not so compelling on its own that it can automatically facilitate the economic growth and diversification needed to support investment and to grow the base of jobs. The city's business image and identity is regularly undermined by infrastructural systems deficits and occasional unrest. There is also a persistent tension and chronic uncertainty in the relationship between the city's commercial nucleus, on the one hand, and the national government, European regulators, and even the local and national electorate on the other.

Second, London's governance arrangements are not optimally configured to tackle inequality and exclusion in jobs and skills, or to upgrade patchy provision in housing, health care, and other amenities. There are constraints that inhibit the pursuit of more than one major infrastructure project at a time, principally the fact that such projects require national support. The city's local and metropolitan governments have very limited access to capital markets to raise the finance with which to invest in and improve infrastructure, and this is compounded by a narrow scope to integrate systems of infrastructure and utilities (largely a result of mass privatisation or ongoing national control) and achieve more efficient outcomes.

Third, London's relationship with the rest of the UK, including both its role and contribution to national development as the capital city and gateway, and its partnership with the other major cities, is poorly defined and disorgani
sed. The capital's reputation is emerging from a cyclical low because of the banking sector's perceived contribution to the financial crisis and the initially lethargic character of the economic recovery, and the perception that this recovery is dominated by the London and the Greater South East. There remains a lack of any regional dimension of governance in the Greater South East of England, which means London cannot easily manage growth and change with its interdependent neighbouring areas.

These three themes are just a snapshot of the factors which prevent London from leveraging intense international demand into all-round success. On the one hand, this book explains and affirms London's enduring virtues of openness, meritocracy, diversity, language and legal systems, learned institutions and knowledge creation, geo-political location, business culture, and tolerance of edginess, hedonism, and the avant-garde. On the other, it argues that London is not yet equipped to fully realise its potential, and that its weaknesses may be exposed in abrupt and unpredictable ways. The book makes the case that the period since the London: World City report witnessed a remarkable set of achievements, but that in some areas the city achieved only partial success whilst in others it only addressed the first phase of permanent improvement agendas which are never complete.

This book advocates that London can learn from other cities as much as it inspires them. The city can draw inspiration from world cities which have effectively tackled problems that are similar in character. Hong Kong has successfully...