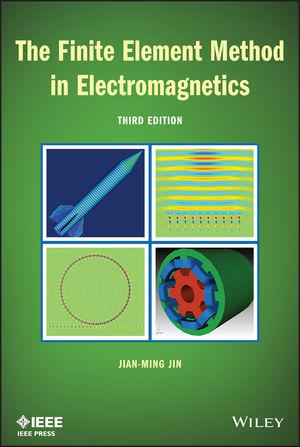 The Finite Element Method in Electromagnetics

A new edition of the leading textbook on the finite element method, incorporating major advancements and further applications in the field of electromagnetics

A new edition of the leading textbook on the finite element method, incorporating major advancements and further applications in the field of electromagnetics

Along with a great many examples, The Finite Element Method in Electromagnetics is an ideal book for engineering students as well as for professionals in the field.

It has been more than 20 years since the publication of the first edition and nearly 12 years since the publication of the second edition of this book. The finite element method has experienced phenomenal growth in the field of computational electromagnetics during these periods. While the early effort was focused on developing the method to model electromagnetic fields correctly and solve electromagnetic problems accurately, the recent effort has been focused more on enhancing the power and expanding the capability of the method to deal with large-scale, complex, and real-life engineering electromagnetic problems through the development of new, more efficient algorithms and effective utilization of new computer technologies. The development of the time-domain finite element method, including the discontinuous Galerkin time-domain method, and a variety of domain decomposition methods during the past decade, together with a variety of new applications, serves as a great testimonial to the success of the recent effort. The purpose of this third edition is to reflect these new developments and applications.

The major changes in the third edition include a significant revision of Chapter 12 on the time-domain finite element method, the addition of two new chapters on the finite element analysis of periodic structures (Chapter 13) and on the domain decomposition methods for finite element analysis of large-scale electromagnetic problems (Chapter 14), the addition of two new sections on higher-order hierarchical vector basis functions (Section 8.7) and on symmetric finite element–boundary integral formulations (Section 10.7), and the removal of the chapter on the method of moments and fast solvers. In addition, there are many relatively minor changes to improve presentation and to add new application examples. Because young generations are no longer familiar with Fortran programming, all the Fortran codes have been converted int
o pseudo codes.

Chapter 12 on the time-domain finite element method is now organized as follows. The chapter starts with the finite element formulation in the time domain and derives time-stepping equations by finite differencing, such as forward, backward, and central differencing, and the Newmark-beta method. It then presents a scheme to analyze the stability of the time-stepping equations. After that, it deals with modeling of both electrically and magnetically frequency-dispersive media, and discusses a variety of important mesh truncation techniques, which include absorbing boundary conditions, perfectly matched layers, boundary integral equations, and waveguide port boundary conditions. Perfectly matched layers and boundary integral equations provide effective truncation for analysis of unbounded open-region scattering and radiation problems, and waveguide port boundary conditions provide perfect absorption and excitation at waveguide ports, which are important for analysis of microwave devices, antennas, and circuits. In this chapter we also discuss how to employ the time-domain finite element method for a hybrid field–circuit analysis to effectively model and simulate complex microwave circuits with embedded lumped circuits. Finally, we deal with one of the most challenging problems for the time-domain finite element method, which is its efficiency. To overcome this challenge, we present a physics-motivated dual-field domain decomposition method and its special version called the element-level time-domain method. We also formulate two popular discontinuous Galerkin time-domain methods and compare them with the element-level time-domain method to evaluate their accuracy and performance.

Besides one significantly expanded chapter and two new chapters, the third edition has expanded the range of application of the finite element method to more electromagnetics-related problems. The first two editions were mostly focused on the analysis of electromagnetic scattering problems and, to a limited extent, antenna radiation and microwave device problems. The third edition has included more analysis examples of antennas and microwave devices and added coverage of application to electrical machines, microwave integrated circuits, periodic structures, phased-array antennas, and photonic devices. For example, a new section (Section 4.6) has been added to demonstrate the analysis of multiconductor transmission lines using the two-dimensional finite element method. Another section (Section 4.7.4) has been added to show the analysis of axisymmetric antennas. Chapters 12–14 present many examples on modeling of complex antennas, phased arrays, frequency selective surfaces, microwave integrated circuits, dielectric gratings, photonic crystal cavities and waveguides, and electromechanical devices.

To keep
this book more focused on the finite element method, I have removed the chapter on the method of moments and fast solvers in this new edition. An expanded and updated version of the removed chapter can be found in my book Theory and Computation of Electromagnetic Fields (Wiley, 2010). Whereas some argued that the method of moments should be considered as a subset of the finite element method, others argued for the contrary, all because both methods can be formulated based on the method of weighted residuals. However, in the computational electromagnetics community, the two have been regarded as different methods because the finite element method is primarily employed to solve partial differential equations, whereas the method of moments is mostly used to deal with integral equations formulated with the aid of Green’s functions. Both methods play important roles in computational electromagnetics; in fact, they are considered two of the three building blocks for the field of computational electromagnetics.

Just like the second edition, which increased from 442 to 753 pages, this edition has also significantly increased in size even after the removal of the chapter on the method of moments and fast solvers. Whereas the size might be overwhelming for beginners, I have maintained all the basic materials and the presentation style that made the first two editions a success. The new materials are added simply to introduce more advanced finite element-based techniques and to illustrate more applications of the finite element method. I hope that this new edition will continue to serve as a useful and easy-to-read introductory text on the finite element method for electromagnetic analysis and that it will also introduce interested readers to the development of more powerful techniques and inspire more research on applications of the finite element method for computational electromagnetics.

As always, I am most grateful to my colleagues,...