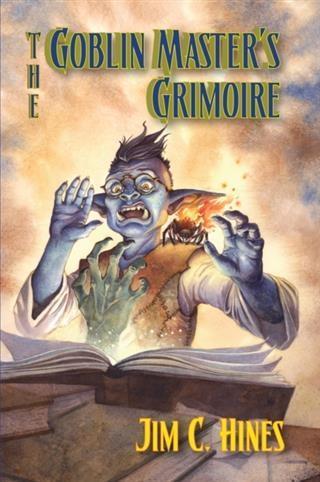 A heroic goblin? Who ever heard of such a thing?

Jim Hines did. And in this collection, you'll meet the intelligent, brave, scrawny, smart-mouthed, and reluctantly heroic goblin, Jig. From shortly after Jig's birth to his unusual leadership of a gobl

A heroic goblin? Who ever heard of such a thing?

Jim Hines did. And in this collection, you'll meet the intelligent, brave, scrawny, smart-mouthed, and reluctantly heroic goblin, Jig. From shortly after Jig's birth to his unusual leadership of a goblin platoon, he ghts sorceresses, hobgoblins, and his own kind - and discovers what it takes to be a leader and a hero! Here is your introduction to the world of goblins, where deep, dark tunnels are the best homes, with only the occasional tunnel cat or zombie to disturb the gloom.

But goblins aren't the only characters in Jim's stories. You'll nd a princess cursed to endless sleep, surrounded by a wall of thorns. Within that wall live the trapped, tormented princes who tried to rescue her - or did they?

Or perhaps you'll venture into a world much like our own, but populated with zombies and fairies working for the police and FBI, or bards and librarians saving the world from all manner of magical creatures.

Or another world where wars are fought by living kites and their Kitemasters.

And just when you think you've seen it all, you'll nd an eerily familiar children's show where the puppets and humans are about to have a very bad day - and an even worse night!

Welcome to the many worlds of Jim C. Hines! It's a journey that you won't soon forget.

THE HAUNTING OF JIGS EAR

Jig sucked the last drops of lizard-fish juice from the stick. Another few days of this, and hed be hungry enough to eat his own arm.

Of course, it was his own fault for not telling Lurok about the carrion worm nesting in his chamber pot. Jig wasnt the only goblin who had seen the long, segmented scavenger climb into the pot, but he was the smallest, and therefore the easiest target of Luroks wrath.

If Lurok kept chasing Jig away from meals, Jig was going to get smaller still. The threads of meat he got from discarded skewers were hardly enough to keep him alive.

Jig jabbed the clean end of the skewer into his ear. Lurok had flung a clod of dirt at Jig this morning, and some of it had lodged in his ear.

The voice came from within his ear. Jig yelped, then covered his mouth with his free hand. He should be safe here in the darkness of the old storage cave, but if Lurok found out where he had been hiding

Jig pushed the stick harder, wiggling it around. The pressure in his ear was worse, as if the dirt was expanding.

Jig jumped. The stick broke. A burst of green light resolved into the shape of a glowing human female.

She arched her back like a tunnel-cat. Rescued at last from eternal imprisonment She spotted Jig, and her voice turned into a screech. By a damned goblin?

It was an accident! Jig backed away.

The woman was tall and slender, dressed in a heavy robe with strange, shadowy characters circling the cuffs. She rippled like an animated puddle when she moved. Jigs vision had always been poor, but the blurring boundaries of her form made his head hurt.

Im still in that horrid mountain, arent I? she asked. Who are you, and how did you find my wand?

Im Jig. He glanced at the heavy, mildew-smelling curtain hangin
g over the cave mouth. The womans light clearly illuminated the mold and water damage. Would he be safer out there with the goblins, or in here with the glowing human?

His hands twitched. The broken stick flew from his grip, and the pieces hovered before the woman.

You broke it? She reached out, but her fingers passed right through the sticks. You idiot! I needed that wand to break the curse!

Jig sighed. Of course there was a curse. There was always a curse.

Before he could answer, a meaty blue hand ripped the curtain aside. Ha! I thought I heard voices. Lurok stepped into the cave. Lurok was a true goblin warrior. His blue skin stretched tight over long, rope-like muscles. The point of one ear was torn from a fight with an ogre. His fangs curved upward, nearly touching his eyes. Ill teach you to run off like What in the name of the dragons hairy arse is that?

Jig didnt bother to remind the other goblin that dragons had no hair, only scales.

Its a girl! Lurok said. A human girl. He drew his weapon, a long club with sharp bits of metal lashed to the end.

How very perceptive, said the ghost. Can it also be trained to feed itself and not soil the carpets?

Lurok snarled. His club whistled through the air, then through the ghost, before embedding itself in a crate of old leather. The ghost raised her hands, and sparks of energy danced along her fingers.

Wait! Jig had no objection to her slaying Lurok, but once humans started killing goblins, they tended to keep going.

Lurok swung again, this time knocking down a pile of kindling and sending a swarm of tiny spiders scurrying across the floor.

Jig took a pinch of satisfaction in the way Lurok jumped back. Cursed?

Thats correct, said the ghost. My name is Muré. I was an apprentice sorceress. My master brought me here more than a year ago to test my power, or so he said. Instead he betrayed me, trapping my soul in m
y own wand in order to enslave me. But he was careless. While he finished his spell, one of the mountain cats pounced on him, knocking him into a crevasse. My body was slain along with his, but my spirit survived.

Her eyes brightened. Jig squinted and looked away.

His staff might still remain, Muré whispered. If we found it, I could use his power to break this curse. I would be free.

The curse still binds me to that wand. Even now I feel its pull. She studied the two goblins. You will help me. Once I have the power of Firams staff, Ill reward you both.

For a moment, Jig was tempted. His mouth watered at the thought of the feasts Murés magic could conjure. Then he thought about the tunnel cats, and his throat tightened.

If there really are tunnel cats, Jig will make good bait. Lurok chuckled. They like to play with rats.

Take Lurok, Jig said. Hes a warrior! Hes strong and brave and stupid! Let him have the glory and the reward and the horrific death.

Murés finger began to glow red. Youre both coming. If you dont, my wand wont be the only thing broken.

Lurok took one last swing with his club, nearly removing Jigs nose on the backswing. Flame sprang up around the tip of Murés finger.

Lurok was stupid, but he learned from his mistakes. Eventually. Pah. Been too long since I hunted tunnel cat anyway.

Easy for him to say. He had his club. Jigs only weapon was a stolen kitchen knife with a wobbly blade.

He should try to escape. Muré didnt need him. If he ran fast enough, he might be able to hide in the lair. Jig was good at hiding. He could

Cold, ghostly fingers seized the tip of his ear. The broken wand floated back into Jigs pouch. Keep that safe, goblin. Do you understand?

Jig nodded hard, too frightened to make a sound, save one pathetic gurgle from his stomach.

Jig and Lurok walked through the dusty goblin caverns
and into the obsidian tunnels beyond without attracting a second glance. At first, Jig had been worried. What would the other goblins do if they saw Muré? But Muré was a ghost. She knew how to remain inconspicuous. She refused to return to her broken wand, afraid of being trapped again, but there were other places to hide.

You could have at least asked first, Jig mumbled.

Do you think I like it in here? Her voice came from within Jigs ear. Apparently when he broke the wand, a bit of magic had lodged in his ear like a parasite. It reminded him of the time a group of older goblins had tried to drown him in Golakas soup cauldron. A chunk of mushroom had gotten stuck in his ear for days. But at least the mushroom hadnt talked so much.

Firam was a lecherous old fool. He tried to seduce me, but I refused him. This is his punishment for that slight. I should have known. I should have insisted on bringing one of the other masters along for the test. But I was young and trusting.

I always understood that hobgoblins were cousins to the goblins, practically the same species.

You take that back, said Jig. Hobgoblins are nothing like us. Theyre well, theyre bigger.

Luroks fingers dug into Jigs throat, stopping the conversation. Two of them and two of us. But we have the element of surprise.

Jig peeked around the tunnel bend. A lantern hung on the wall near the arched entrance to hobgoblin territory. Green light reflected from the obsidian walls. Only the floor was dull, where years of grime and dirt formed a clay-like layer over the volcanic glass.

They have the element of really big swords, said Jig. Couldnt we try to bribe them? Hobgoblins thrived on their trade with goblins. Goblins provided food, firewood, beer, and a variety of other goo
ds. In trade, the hobgoblins let the goblins live. Most of the time.

Jig promptly stepped on his own foot and fell. He watched Luroks boots clomp by, heading toward the hobgoblins.

The hobgoblins drew curved swords as Lurok approached. They had longer arms, faster reflexes, and stronger muscles than most goblins. Their skin was a sickly yellow tinge, but that was normal for hobgoblins. Their black, heavily greased hair shone in the light. Neither one appeared worried.

One of the hobgoblins spotted Jig. He drew his sword and walked up the tunnel, while his partner prepared to face Lurok. Jigs only hope was that Lurok might somehow kill his opponent and stab the other hobgoblin in the back.

Lurok attacked. The other hobgoblin easily parried the blow, then punched Lurok square in the nose. Lurok staggered back, and his head cracked against the wall. He fell like a rock.

Why did it have to be goblins? Muré asked.

Youre a wizard. Get out of my ear and do something wizardly! Jig grabbed one piece of the wand and jammed it into his ear.

The hobgoblin hesitated. He probably...