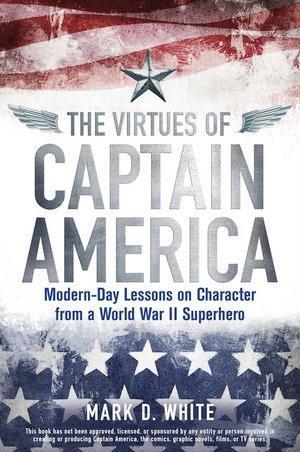 The Virtues of Captain America

The first look at the philosophy behind the Captain America comics and movies, publishing in advance of the movie release of Captain America: The Winter Solider in April 2014. In The Virtues of Captain America, philosopher and long-time comics fan Ma … weiterlesen
Dieser Artikel ist auch verfügbar als:
Geschenk per Mail versenden
eBook epub

The first look at the philosophy behind the Captain America comics and movies, publishing in advance of the movie release of Captain America: The Winter Solider in April 2014. In The Virtues of Captain America, philosopher and long-time comics fan Mark D. White argues that the core principles, compassion, and judgment exhibited by the 1940 s comic book character Captain America remain relevant to the modern world. Simply put, &quote;Cap&quote; embodies many of the classical virtues that have been important to us since the days of the ancient Greeks: honesty, courage, loyalty, perseverance, and, perhaps most importantly, honor. Full of entertaining examples from more than 50 years of comic books, White offers some serious philosophical discussions of everyone s favorite patriot in a light-hearted and accessible way. Presents serious arguments on the virtues of Captain America while being written in a light-hearted and often humorous tone Introduces basic concepts in moral and political philosophy to the general reader Utilizes examples from 50 years of comics featuring Captain America, the Avengers, and other Marvel superheroes Affirms the value of &quote;old-fashioned&quote; virtues for the modern world without indulging in nostalgia for times long passed Reveals the importance of the sound principles that America was founded upon Publishing in advance of Captain America: The Winter Soldier out in April 2014.

Mark D. White is Professor and Chair of the Department of Philosophy at the College of Staten Island/CUNY and co-editor of Batman and Philosophy.

This is a book I’ve wanted to write for years, and I’m very excited finally to share it with you. In these pages, I’m going to explain how Captain America—the fictional World War II super-soldier and modern-day Avenger familiar from comic books, movies, and animated TV series—provides an example of the personal virtues that philosophers since ancient times have put forward as defining personal excellence, as well as the ideals and principles upon which the United States of America was founded. To do this, I will combine my love of superhero comics with my background in moral and political philosophy to show how we can be better people—for ourselves, our family, and our communities—and how we can raise the level of political discussion in America so we can start addressing our problems rather than simply yelling at each other about them.

Not bad for something based on a “funny book,” huh?

Captain America—or simply “Cap”—has been one of the premier comic-book superheroes for almost three quarters of a century. Steve Rogers, the scrawny kid from New York who was transformed into a super-soldier by the United States government with super-soldier serum and Vita-Rays, was introduced when Joe Simon and Jack Kirby’s Captain America Comics #1 hit the newsstands on March 10, 1941, nine months before the attack on Pearl Harbor.1 The book lasted until the end of the 1940s, suffering the fate of most superhero comics as readers’ interests turned to romance, horror, and Western comics. After a short-lived revival in the mid-1950s, Captain America was not seen again until 1964, when Avengers #4 told the now-famous tale of how Iron Man, Thor, Giant Man, and Wasp found Steve Rogers frozen in a block of ice, his super-soldier-serum preserving his body in a state of suspended animation.2 For the last fifty years, Cap
has been a central player in the ever-expanding Marvel Universe, both in his own solo title and various Avengers books as well as the epic crossover stories that have become an annual event in comics publishing since the mid-1980s. Add to those the Captain America and Avengers films and his appearances in animated series, videogames, and other media, and it’s easy to see why Captain America remains as much a heroic icon today as he was during World War II.

For all their groundbreaking ideas and innovative artwork, the “Golden Age” superhero comics published in the 1940s were never big on characterization, focusing mostly on exciting action and pure heroics. But that changed with the revival of superheroes in the late 1950s and early 1960s, especially when the Fantastic Four and other new heroes were introduced by Marvel Comics. Once simply a patriotic symbol meant to inspire a nation at war, upon his return Captain America became a tragic figure along with his fellow Avengers and other Marvel superheroes. Just as the Fantastic Four’s Thing was disfigured by cosmic rays, Iron Man’s heart was under constant threat of encroaching shrapnel, and Spider-Man bore the guilt of inadvertently causing the death of his beloved Uncle Ben, Captain America found himself a “man out of time,” uncomfortable in the modern age with its new technology, social customs, and values. This sense of displacement, established almost immediately by Stan Lee, Jack Kirby, and Don Heck upon Cap’s reappearance in comics like Avengers, Tales of Suspense, and his own title, came to define the character for years to come. And nothing epitomized Cap’s “strangeness” more than his “old-fashioned” values, forged in the Great Depression and World War II and thought by many of his fellow superheroes to be relics of a simpler time.

Ir
onically, it is this code of ethics, backed by Captain America’s steely resolve and careful judgment, that makes his participation and leadership invaluable to the Marvel Universe. Soon after his reappearance, Cap became the moral center of the superhero community, a figure to whom all other heroes would compare themselves and against whom they would argue their own moral positions. This was most obvious during Marvel’s “Civil War” when Captain America and Iron Man stood against each other over the issue of superhero registration. (We’ll talk about this conflict much more throughout the book, because “Civil War” is a storyline incredibly rich in moral and political concepts.) Soon afterwards, when Cap was apparently shot and killed, the Marvel Universe came under the control of a madman, Norman Osborn (formerly Spider-Man’s nemesis the Green Goblin), in what was called the “Dark Reign,” which ended only after Captain America returned from the “dead.”3 With the simple command, “It’s time to take back this country,” Cap rallied the other heroes to defeat Osborn, launching what was called the “Heroic Age.”4

While Cap was gone (not dead but rather thrown back in time), the Marvel Universe was literally a ship without its Captain, and without his leadership, Norman Osborn was able to take control of the world. After Cap came back during Osborn’s siege on Thor’s home of Asgard and helped to set the world right again, the moral center of the Marvel Universe was restored at last. This is not to say that the other heroes—or the readers—always agree with Cap on what the right thing to do is. There are sound arguments to be made against his positions, just as there are against anybody else’s. But the strength and constancy of Cap’s core moral positions provide a valuable source of debate and disagreement in the comics&md
ash;and they also give us a lot of material to draw from throughout the course of this book!

In this book, I’m going to present Captain America’s personal morality in terms of virtue ethics, a type of moral theory originating with ancient Greek philosophers such as Aristotle, Plato, and the Stoics. There are other ways to describe Cap’s ethics, certainly, and I’ll draw from these other traditions when appropriate. But I chose virtue ethics as my main framework because it has clear intuitive appeal, does not require a lot of fancy philosophical language to explain, and is easily applicable to the personal and political issues of today. Literally speaking, if we look at them this way, Cap’s values are old-fashioned, dating from about 2500 years ago, but many philosophers (including myself) regard the work of the early virtue ethicists as timeless, and innovative work continues in the tradition today.

The original virtue ethicists incorporated wonderfully perceptive observations about human nature into their prescriptions for behaving morally and promoting the “good life.” This allowed them to avoid the strict rules and formulas of the ethical systems that followed, and instead they offered the flexibility of moral judgment that people need to make decisions in complex real-world situations. As advanced as we like to think we are in the modern world, the essential moral problems of respecting each other, getting along, and working together have not changed much in the last several thousand years. In fact, because technology, along with its many gifts, has also expanded the scale and scope of the ways we can hurt each other, the lessons of the virtue ethicists are more important now than ever—and a “man out of time” such as Captain America can see that better than anyone.

Throughout this book, I’ll argue that Cap’s “old-fashioned” moral code is exac
tly what we need to restore civility and respect in the twenty-first century in both our personal lives and our political debates. He is what the ancient philosophers—yes, more ancient than Cap—called a moral exemplar. Today we’d call him a role model, but both terms refer to a person we can look up to and use as an example of how to act in certain situations. Role models today are often political figures, entertainers, or athletes—all of whom are real people (whether alive or dead). But can a fictional character be a role model? We’ll talk about that soon, but obviously I would answer yes, we can learn things from fictional characters (while keeping in mind that many of the details or stories we “know” about real-life role models are just as fictional!).

This book starts with an introduction of basic ethics in chapter 1 and discusses several issues with using fictional characters such as Captain America as role models in chapter 2. After that, we start looking at Captain America in detail, using examples and quotations from the last fifty years of his stories in the comics. In chapter 3, we’ll discuss several of the individual virtues that Cap exemplifies, such as courage, humility, and perseverance, and show how virtue ethics shows them to be more subtle and nuanced than they might seem. In chapter 4, we’ll look at qualities that describe Cap’s moral character more broadly, such as honor and integrity, and we’ll explore his adherence to principle and duty, both of which influence how Captain America exercises his virtuous character traits—and provide a valuable example for us in the twenty-first century as well.

While these virtues and characteristics describe the basic themes of Captain America’s ethics, they aren’t much help when it comes to making hard choices in specific...