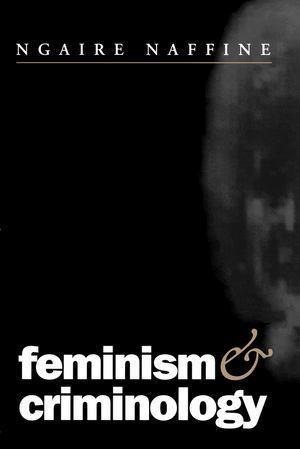 This much-needed book is a concise and accessible account of the contribution of feminist thinking to the study of crime. Tracing the intellectual history of criminology from its scientific foundations in the nineteenth century to its recent encounte … weiterlesen
Dieser Artikel ist auch verfügbar als:
Geschenk per Mail versenden
eBook epub

This much-needed book is a concise and accessible account of the contribution of feminist thinking to the study of crime. Tracing the intellectual history of criminology from its scientific foundations in the nineteenth century to its recent encounters with postmodernism, Naffine discusses the ways in which the discipline has established its priorities and values, and shows how men became and remain the central interest of the discipline. Criminologists, she argues, are still reluctant to engage with feminist scholarship which questions their agenda. Naffine argues that for several decades feminists from a variety of disciplines have been studying crime, producing increasingly refined and sophisticated understandings of the phenomenon. Their interests have ranged widely, from the effects of masculinity and femininity on the propensity to offend, to the ways in which class and race affect the gender dimension of crime. They have pursued difficult questions about the nature of knowledge and the meanings of human behaviour in men and women. Naffine analyses the treatment of women offenders by the criminal justice system, and women as victims of crime - especially violent crime - and argues for a different understanding of sexual relations between men and women within the crime of rape. Finally, she examines how feminist detective fiction can enliven and enhance the study of crime. Provocative and well-argued, this timely book will be welcomed by students and researchers in women's studies, gender studies, criminology, sociology and law.

Ngaire Naffine is the author of Feminism and Criminology, published by Wiley.

It is tempting to begin a book on feminism and criminology with a statement about the neglect of both women and feminism by the discipline. Certainly, a quick scan of the criminology section of any American or British library will turn up many standard student texts in which women and feminism play but a minor role. This exercise will confirm that criminology is still a discipline dominated by men, and that its subject matter is also male-dominated. Criminology, it seems, is mainly about academic men studying criminal men and, at best, it would appear that women represent only a specialism, not the standard fare.

Similarly, feminism as a substantial body of social, political and philosophical thought (indeed the subject of this book), does not feature prominently in conventional criminological writing. When feminism is formally allocated a place in a textbook, it is often to be found within the womens chapter, which is the chapter invariably on women as offenders and as the victims of crime. This is necessarily a constricted use of feminism. Alternatively, feminism is slotted into a chapter entitled Gender and Crime, which should deal at least with the implications of masculinity and femininity for the criminality of both sexes, but is often simply another, and misleading, way of designating the now compulsory chapter on women. Thus, feminism is either reduced to, or conflated with, the study of women and crime, implicitly a minor branch of the discipline of criminology. Feminism in its more ambitious and influential mode is not employed in the study of men, which is the central business of criminology. The potential of feminist analyses in criminology at large is, therefore, widely misunderstood and underestimated. The message to the reader is that feminism is about women, while criminology is about men.

A clear illustration of this interesting logic is to be found in the Oxford Handbook of Crimino
logy, a weighty volume (1259 pages) intended to present students with a comprehensive account of the current state of the discipline.1 In the introductory chapter, the editors tell us their thoughts on the organization of the Oxford book.2 They were aware from the start that the dimensions of gender and race needed careful handling, and felt obliged to choose between two approaches. Should we insist that gender and race be thoroughly addressed in every chapter? Or should we assign them chapters for specialist coverage?3 The editors choose the second option. As a consequence, Gender and Crime4 is the twenty-first chapter of the book, and there is precious little on gender before this: the preceding thousand pages of the book are remarkably free of any explicit analysis of the implications of gender for the understanding of crime. Then when we get to chapter twenty-one, we discover that this is in fact a chapter about women and crime, not about gender.5 There is no equivalent chapter on men.

By setting up the intellectual task as they do, the editors of the Oxford book are tacitly asking us to think of criminology as a discipline that is somehow free from the effects of gender when it is in its proper form. Gender is treated as a specialist topic (rather than integral to the analysis of crime), and then we discover that this specialism of gender actually refers to the study of women. In a few easy steps, the editors have established a standard case and an exception or speciality. The standard case is the study of men as non-gendered subjects and the speciality is the study of women as gendered beings. As Jonathon Culler has pointed out, this procedure of comparing a deviant with a standard case is generally assumed to be the appropriate one in any serious analysis, whatever the discipline. It is not peculiar to criminology. The method is to describe the simple, normal standard case of [whatever the topic], illustrating it
s essential nature, and proceeding from there to discuss other cases that can be defined as complications, derivations, and deteriorations.6

The editors of the Oxford book perform precisely this manoeuvre. Gender, which predictably turns out to mean women, is treated as a specialism that can come late in the book. The main part of the volume, which is essentially about men (but not as sexed men and therefore not explicitly so), then appears as the natural heartland of criminology, its proper terrain. In criminology, as in other disciplines, it is men, not women, who supply the essential (and therefore unexamined) standard case. Men, themselves, are not compared with others to see what makes them specific and different.

American criminology texts employ a similar logic. In 1991, Stephen E. Brown, Finn-Aage Esbensen and Gilbert Geis published one of the many standard introductory textbooks of criminology tailored for the American student market. Criminology: Explaining Crime and its Context is some 730 pages long and divided into three parts: foundations of criminology, which introduces the subjects of criminology, criminal justice and crime statistics; theories of crime, which traverses the usual range of theories of crime; and types of crime. Women appear in the third section on criminal types. The reason that female crime enters the book this late in the day, well after the general chapters on theoretical criminology, is because theories of crime and delinquency until now largely have failed to incorporate gender variables.7 And yet, the authors concede, Perhaps the most salient characteristic of crime in American society is the extraordinary variation in the rates at which males and females commit most major crimes.8

Although they decry implicitly the practice of setting women to the side (or towards the end) in criminology, because, as they say, sex difference is the most significant feature of crime, Brown and c
olleagues do just this. Without further apology, they effectively concede on page 495 that the preceding pages of their volume, which purported to be a general treatment of crime and criminology, have really been about men but (somehow) as ungendered subjects. Women appear on page 499 as a special type of offender, whose specificity is their gender, a characteristic which by implication men lack. The topic of feminism is also contained within this womens chapter, neatly labelled and condensed into three pages. Placed thus within the womens chapter, feminism is thoughtfully quarantined from the mens pages (which constitute virtually the entire book). The message is clear: feminism has nothing of interest to say about criminology proper.

A second, more recent example of American textbook writing is the second 1994 edition of Criminology and Justice by Lydia Voigt, William E. Thornton, Leo Barrile and Jerome M. Seaman. This book comes in five parts: the usual introduction to the discipline; crime statistics; crime theories; criminal types; and the criminal justice system. Here the subject of female criminality is allotted a few pages in the theory section. It begins with the usual mea culpa about the neglect of women: Perhaps the most serious indictment of criminological theories is that they are nothing more than specialised theories of male delinquency and criminality.9 The authors then concede, in one way or another, that the indictment is fully justified. They say that Over the years, attempts have been made to apply some of the popular sociological theories to female offenders, a clear admission that the popular theories have been theories of men.10 They also reveal that all the social theories of crime hitherto discussed have been based on male samples.11 But then knowing all this, the authors are unblushing in their conservatism. They adhere to the standard textbook formula: the general and more extensive part of the
work is about men (though it is not called the mens part which would be to concede its limited significance), and then the study of some specialist areas includes a short piece on women who are explicitly gendered. And although they include in their womens section a handful of references to feminist work, they do not name it as such. Feminist criminology thus does not even receive the dignity of a label, either within or without the womens chapter.12

At this point, it would seem that my introductory statement about the neglect of feminism by criminology would be well justified. It would also seem, by implication, that feminism offers few prospects for criminology. However, to accept this negative appraisal of feminisms achievements would be to ignore a considerable and mature body of writing by feminists on the subject of crime. As this book will reveal, there is a wealth of feminist criminology that is not appearing, to any significant degree in the standard texts on crime.13 There are feminists who have carried out the more conventional (but necessary) empirical work of documenting sex bias within the criminal justice system. Feminists have questioned the scientific methods deployed by criminologists, as well as their highly orthodox approach to the nature of knowledge. Feminists have engaged with criminological theory, across the range, questioning its ability to provide general explanations of human...