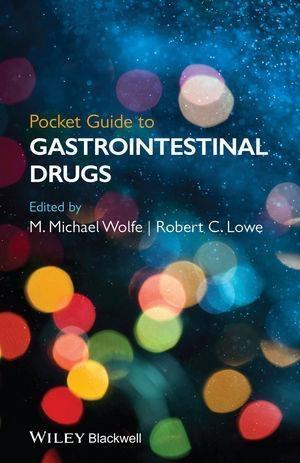 Learn all you need to know about gastrointestinal drugs and their clinical use with this one-stop, rapid reference pocket guide. Brought to you by many of the world's leading GI drug experts, Pocket Guide to Gastrointestinal Drugs provides comprehens … weiterlesen
Dieser Artikel ist auch verfügbar als:
Geschenk per Mail versenden
eBook epub

Learn all you need to know about gastrointestinal drugs and their clinical use with this one-stop, rapid reference pocket guide. Brought to you by many of the world's leading GI drug experts, Pocket Guide to Gastrointestinal Drugs provides comprehensive guidance to the pharmacological properties of drugs used to treat gastrointestinal conditions, including mechanisms of action, appropriate administration, and potential adverse effects associated with their use. Organized by class of drug and ranging from PPIs to immunosupressants, each chapter first examines the specific agents within that class and then their appropriate and judicious use across a range of specific GI disorders. Key features include: Introduction of drug class Basic pharmacology, including mechanism of action, bioavailability, metabolism, interactions, adverse effects, toxicity, and special considerations Dosing information for each GI condition and on- and off-label use Consistent use of both generic and trade names throughout Specific reference to drug use in pediatric patients and during pregnancy Perfect for quick consultation on the wards and in the office, Pocket Guide to Gastrointestinal Drugs is the ideal tool for all those managing patients with GI conditions, including gastroenterologists, GI trainees, emergency physicians, GI specialist nurses, primary care physicians and residents, intensivists and pharmacists.

Proton pump inhibitors (PPIs) are used clinically in the treatment of acid related disorders, including gastroduodenal (peptic) ulcers, gastroesophageal reflux disease (GERD), nonsteroidal anti-inflammatory (NSAID) induced gastroduodenal ulcers, stress-related ulcer syndrome in critically ill patients, Zollinger-Ellison syndrome (ZES), and as a component of Helicobacter pylori (H. pylori) eradication. Prior to the introduction of PPIs, histamine H2-receptor antagonists (H2RAs) were the mainstay of therapy for these disorders. The introduction of PPIs in the 1980s expanded the therapeutic options and has allowed clinicians to optimize the medical treatment of these acid related disorders.

Parietal cells, which comprise ∼85% of the cell population in the stomach, secrete 0.16 M hydrochloric acid (HCl) upon stimulation by acetylcholine, histamine, and gastrin (Figure 2.1). Upon meal stimulation, the parietal cell undergoes intracellular structural changes to increase the surface area of the cell to enable the active transport of H+ ions against a 3 000 000:1 ionic gradient in exchange for K+ (Figure 2.2). With the discovery that the final step in parietal cell acid secretion required an apical surface H+/K+ adenosine triphosphatase (ATPase) enzyme (Figure 2.1), PPIs were developed as specific inhibitors of this ATPase.

Source: Adapted from MM Wolfe and G Sachs (2000). Reproduced with permission of Elsevier.

The PPIs function as prodrugs that share a common structural motif, a substituted pyridylmethylsulfinyl benzimidazole, but vary in terms of their substitutions, which yield slightly different pKa values. The prodrug is a weak protonatable pyridine that traverses the parietal cell membrane. As the prodrug accumulates in the highly acidic secretory canaliculus, it undergoes an acid catalyzed conversion to a reactive species, the thiophillic sulfenamide. This active moiety then covalently binds to a specific cysteine residue (Cys 813) on the H+/K+ ATPase (via disulfide bond formation) and inactivates it, thus suppressing basal and stimulated gastric acid secretion. The rate of conve
rsion to the active form varies among the PPIs, as activation occurs when the regional pH decreases below the pKa of the specific PPI. Thus, some PPIs may have a slightly faster onset of action, with rabeprazole having the most rapid onset (pKa 5.0), followed by omeprazole, lansoprazole, esomeprazole (pKa 4.0), and finally pantoprazole (pKa 3.9). These pharmacokinetic differences have not proven to be clinically significant.

The PPIs are the most potent inhibitors of gastric acid secretion available when administered correctly, based on their pharmacodynamics. Because acid secretion must be stimulated for maximum efficacy, PPIs should be taken before the first meal of the day. PPIs are most effective when administered after a prolonged fast, when the greatest number of H+/K+ ATPase molecules is present in parietal cells, which is in the morning for most patients. In addition, administration of PPIs should be followed by food ingestion, when the gastric parietal cells are stimulated to secrete acid in response to a meal. Moreover, these drugs should not be used in conjunction with H2RAs, prostaglandins, somatostatin analogs, or other antisecretory agents. Animal studies have demonstrated that the concomitant administration of PPIs and other antisecretory agents markedly reduces the acid inhibitory effects of PPIs. In most individuals, once-daily dosing is sufficient to produce the desired level of acid inhibition. A second dose, if required, should be administered before the evening meal. Importantly, meals should include protein or another stimulant of gastric acid secretion (e.g., coffee). In addition, based on the pharmacokinetics of PPIs, the most effective response occurs with consistent (i.e., daily) dosing, rather than sporadic (i.e., as needed) dosing.

The oral bioavailability of PPIs ranges from 45% (omeprazole) to 85% (lansoprazole). Although PPIs have a circulating T½ of only 1–
1.5 hours, the biological T½ of the inhibited complex is ∼24 hours, due to its mechanism of action. Because all the PPIs require accumulation and acid activation, their onset of inhibition is delayed, and after the initial dose, acid secretion continues, but at a reduced level. Subsequently, H+/K+ ATPase enzymes that are recruited to the secretory canaliculus in the parietal cell are then inhibited by additional doses of PPI, further reducing acid secretion. Steady state acid inhibitory properties occur by ∼5 days and inhibit maximal acid output by 66%.

PPIs are principally metabolized by CYP2C19, a member of the hepatic cytochrome P450 family of enzymes, with the exception of lansoprazole, which is mainly metabolized by CYP3A4. It is possible that PPIs may affect the metabolism of other drugs that are metabolized by this family of enzymes, including warfarin, diazepam, phenytoin, digoxin, carbamazepine, and theophylline. Asian populations and the elderly commonly harbor polymorphisms in the CYP2C19 gene, which affects PPI metabolism and has been shown to increase the drugs' acid inhibitory properties. PPIs are mainly excreted in urine, with the exception of lansoprazole, which is mainly excreted in feces.

Clinical use and dosing

PPIs are widely used and generally considered safe and effective. Six different compounds of proton pump inhibitors currently exist on the market. The specific brand names vary (Table 2.1), depending upon the country of sale, and include omeprazole, lansoprazole, rabeprazole, pantoprazole, esomeprazole, and dexlansoprazole. The first PPI approved for use in the United States was omeprazole, while pantoprazole was the first PPI approved for intravenous use in the USA. With the exception of omeprazole (pregnancy Class C), all PPIs have been categorized as Class B agents.


PPIs are used to treat a number of acid-related disorders, including acute gastroduodenal (peptic) ulcer, treatment and prevention of NSAID-associated ulcers, gastroesophageal reflux disease (GERD), medical management of Zollinger-Ellison syndrome prior to definitive surgical treatment, treatment and prevention of GI hemorrhage, stress ulcer bleeding in critically ill patients, and as a component in the treatment of H. pylori eradication. They are also commonly used to treat nonulcer dyspepsia.