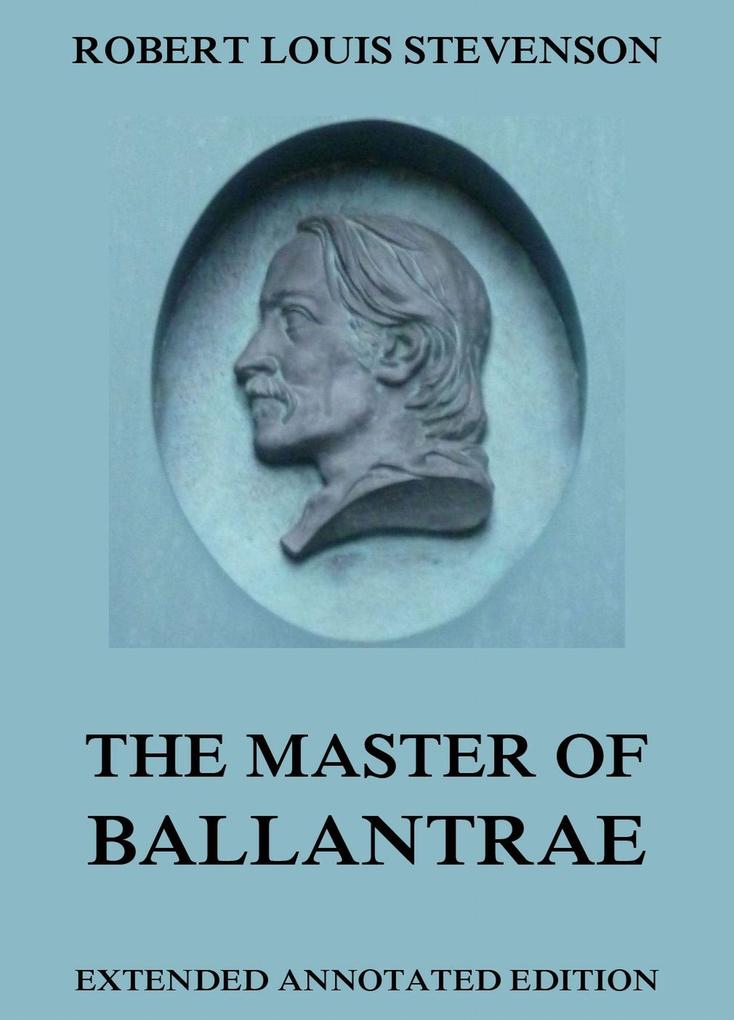 The Master of Ballantrae

This is the extended annotated edition including a detailed biographical primer on the life and works of the author.

In his romance "The Master of Ballantrae" Stevenson has touched high-water mark. One is tempted to go beyond this and say that no mo … weiterlesen

This is the extended annotated edition including a detailed biographical primer on the life and works of the author.

In his romance "The Master of Ballantrae" Stevenson has touched high-water mark. One is tempted to go beyond this and say that no modern work of fiction in the English language rises higher in the scale of literary merit than this. It is a story of human passion, of human weakness, of human love and hate. The scene of the tale, for the most part, is laid in and around the House of Durrisdeer, on the Solway shore. Four persons make up the dramatis persona, at the beginning of the story, and although others come into the drama as it wears on to its tragical close, it may be said that no greater number than this is called into the plot of the piece. An old lord overfond of his rascally elder son; that son, devilish in his selfishness and satanic in his powers of fascination; a young woman blindly in love with him; and a younger son, who is early taunted with being the Supplanter, and who has the only virtue in the family; these are the materials from which Mr. Stevenson has evolved one of the most admirable pieces of literary work that has been given to the world of readers in many a day.

I made the last of my journey in the cold end of December, in a mighty dry day of frost, and who should be my guide but Patey Macmorland, brother of Tam!  For a tow-headed, bare-legged brat of ten, he had more ill tales upon his tongue than ever I heard the match of; having drunken betimes in his brother’s cup.  I was still not so old myself; pride had not yet the upper hand of curiosity; and indeed it would have taken any man, that cold morning, to hear all the old clashes of the country, and be shown all the places by the way where strange things had fallen out.  I had tales of Claverhouse as we came through the bogs, and tales of the devil, as we came over the top of the scaur.  As we came in by the abbey I heard somewhat of the old monks, and more of the freetraders, who use its ruins for a magazine, landing for that cause within a cannon-shot of Durrisdeer; and along all the road the Duries and poor Mr. Henry were in the first rank of slander.  My mind was thus highly prejudiced against the family I was about to serve, so that I was half surprised when I beheld Durrisdeer itself, lying in a pretty, sheltered bay, under the Abbey Hill; the house most commodiously built in the French fashion, or perhaps Italianate, for I have no skill in these arts; and the place the most beautified with gardens, lawns, shrubberies, and trees I had ever seen.  The money sunk here unproductively would have quite restored the family; but as it was, it cost a revenue to keep it up.

Mr. Henry came himself to the door to welcome me: a tall dark young gentleman (the Duries are all black men) of a plain and not cheerful face, very strong in body, but not so strong in health: taking me by the hand without any pride, and putting me at home with plain kind speeches.  He
led me into the hall, booted as I was, to present me to my lord.  It was still daylight; and the first thing I observed was a lozenge of clear glass in the midst of the shield in the painted window, which I remember thinking a blemish on a room otherwise so handsome, with its family portraits, and the pargeted ceiling with pendants, and the carved chimney, in one corner of which my old lord sat reading in his Livy.  He was like Mr. Henry, with much the same plain countenance, only more subtle and pleasant, and his talk a thousand times more entertaining.  He had many questions to ask me, I remember, of Edinburgh College, where I had just received my mastership of arts, and of the various professors, with whom and their proficiency he seemed well acquainted; and thus, talking of things that I knew, I soon got liberty of speech in my new home.

In the midst of this came Mrs. Henry into the room; she was very far gone, Miss Katharine being due in about six weeks, which made me think less of her beauty at the first sight; and she used me with more of condescension than the rest; so that, upon all accounts, I kept her in the third place of my esteem.

It did not take long before all Patey Macmorland’s tales were blotted out of my belief, and I was become, what I have ever since remained, a loving servant of the house of Durrisdeer.  Mr. Henry had the chief part of my affection.  It was with him I worked; and I found him an exacting master, keeping all his kindness for those hours in which we were unemployed, and in the steward’s office not only loading me with work, but viewing me with a shrewd supervision.  At length one day he looked up from his paper with a kind of timidness, and says he, “Mr. Mackellar, I think I ought to tell you that you do very well.”  That was my first word of commendation; and from that day his j
ealousy of my performance was relaxed; soon it was “Mr. Mackellar” here, and “Mr. Mackellar” there, with the whole family; and for much of my service at Durrisdeer, I have transacted everything at my own time, and to my own fancy, and never a farthing challenged.  Even while he was driving me, I had begun to find my heart go out to Mr. Henry; no doubt, partly in pity, he was a man so palpably unhappy.  He would fall into a deep muse over our accounts, staring at the page or out of the window; and at those times the look of his face, and the sigh that would break from him, awoke in me strong feelings of curiosity and commiseration.  One day, I remember, we were late upon some business in the steward’s room.

This room is in the top of the house, and has a view upon the bay, and over a little wooded cape, on the long sands; and there, right over against the sun, which was then dipping, we saw the freetraders, with a great force of men and horses, scouring on the beach.  Mr. Henry had been staring straight west, so that I marvelled he was not blinded by the sun; suddenly he frowns, rubs his hand upon his brow, and turns to me with a smile.

“You would not guess what I was thinking,” says he.  “I was thinking I would be a happier man if I could ride and run the danger of my life, with these lawless companions.”

I told him I had observed he did not enjoy good spirits; and that it was a common fancy to envy others and think we should be the better of some change; quoting Horace to the point, like a young man fresh from college.

It was not long before I began to ge
t wind of the causes that so much depressed him.  Indeed a blind man must have soon discovered there was a shadow on that house, the shadow of the Master of Ballantrae.  Dead or alive (and he was then supposed to be dead) that man was his brother’s rival: his rival abroad, where there was never a good word for Mr. Henry, and nothing but regret and praise for the Master; and his rival at home, not only with his father and his wife, but with the very servants.

They were two old serving-men that were the leaders.  John Paul, a little, bald, solemn, stomachy man, a great professor of piety and (take him for all in all) a pretty faithful servant, was the chief of the Master’s faction.  None durst go so far as John.  He took a pleasure in disregarding Mr. Henry publicly, often with a slighting comparison.  My lord and Mrs. Henry took him up, to be sure, but never so resolutely as they should; and he had only to pull his weeping face and begin his lamentations for the Master—“his laddie,” as he called him—to have the whole condoned.  As for Henry, he let these things pass in silence, sometimes with a sad and sometimes with a black look.  There was no rivalling the dead, he knew that; and how to censure an old serving-man for a fault of loyalty, was more than he could see.  His was not the tongue to do it.

Macconochie was chief upon the other side; an old, ill-spoken, swearing, ranting, drunken dog; and I have often thought it an odd circumstance in human nature that these two serving-men should each have been the champion of his contrary, and blackened their own faults and made light of their own virtues when they beheld them in a master.  Macconochie had soon smelled out my secret inclination, took me much into his confidence, and would rant against the Master by the hour, so that even my work s
uffered.  “They’re a’ daft here,” he would cry, “and be damned to them!  The Master—the deil’s in their thrapples that should call him sae! it’s Mr. Henry should be master now!  They were nane sae fond o’ the Master when they had him, I’ll can tell ye that.  Sorrow on his name!  Never a guid word did I hear on his lips, nor naebody else, but just fleering and flyting and profane cursing—deil hae him!  There’s nane kent his wickedness: him a gentleman!  Did ever ye hear tell, Mr. Mackellar, o’ Wully White the wabster?  No?  Aweel, Wully was an unco praying kind o’ man; a dreigh body, nane o’ my kind, I never could abide the sight o’ him; onyway he was a great hand by his way of it, and he up and rebukit the Master for some of his on-goings.  It was a grand thing for the Master o’ Ball’ntrae to tak up a feud wi’ a’ wabster, wasnae’t?”  Macconochie would sneer; indeed, he never took the full name upon his lips but with a sort of a whine of hatred.  “But he did!  A fine employ it was: chapping at the man’s door, and crying ‘boo’ in his lum, and puttin’ poother in his fire, and pee-oys [1] in his window; till the man thocht it was auld Hornie was come seekin’ him.  Weel, to mak a lang story short, Wully gaed gyte.  At the hinder end, they couldnae get him frae his knees, but he just roared and prayed and grat straucht on, till he got his release.  It was fair murder, a’body said that.  Ask John Paul—he was brawly ashamed o’ that game, him that’s sic a Christian man!  Grand doin’s for the Master o’ Ball’ntrae!”  I asked him what the Master had thought of it himself.  “How would I ken?” says he.  &ldq
uo;He never said naething.”  And on again in his usual manner of banning and swearing, with every now and again a “Master of Ballantrae” sneered through his nose.  It...