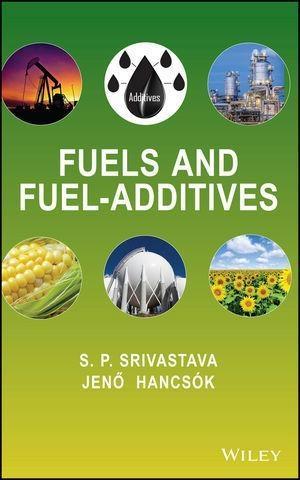 Examines all stages of fuel production, from feedstocks to finished products Exploring chemical structures and properties, this book sheds new light on the current science and technology of producing energy efficient and environmentally friendly fuels. Moreover, it explains the role of fuel-additives in the production cycle. This expertly written and organized guide to fuels and fuel-additives also presents requirements, rules and regulations, including US and EU standards governing automotive emissions, fuel quality and specifications, alternate fuels, biofuels, antioxidants, deposit control detergents/dispersants, stabilizers, corrosion inhibitors, and polymeric fuel-additives. Fuels and Fuel-Additives covers all stages and facets of the production of engine fuels as well as heating and fuel oils. The book begins with a quick portrait of the future of fuels and fuel production. Then, it sets forth the regulations controlling exhaust gas emissions and fuel quality from around the world. Next, the book covers: Processing of engine fuels derived from crude oil, including the production of blending components Production of alternative fuels Fuel-additives for automotive engines Blending of fuels Key properties of motor fuels and their effects on engines and the environment Aviation fuels The final chapter of the book deals with fuel oils and marine fuels. Each chapter is extensively referenced, providing a gateway to the primary and secondary literature in the field. At the end of the book, a convenient glossary defines all the key terms used in the book. Examining the full production cycle from feedstocks to final products, Fuels and Fuel-Additives is recommended for students, engineers, and scientists working in fuels and energy production.

SOM PRAKASH SRIVASTAVA, MSc, DPhil, has forty-five yearsof research experience in the field of fuels, lubricants, andadditives. He is a former executive director of the R&D centerof Indian Oil Corporation (a global Fortune 500 company), andDirector of Indian Oil Blending Ltd and Iftex Oils & ChemicalsLtd. Dr. Srivastava has been responsible for developing an entirerange of fuels and lubricants for the Indian Oil Corporation. Theauthor and coauthor of 200 research papers, thirty patents, andfour books, Dr. Srivastava is currently an independent consultanton fuels and lubricants.

JENO HANCSÓK, MSc, Doctor of Hungarian Academyof Sciences, is head of the MOL Department of Hydrocarbon and CoalProcessing at the University of Pannonia and a consultant of theinternational oil and gas company, MOL Plc. He is the author orcoauthor of more than 700 papers and presentations, and holdsfourteen patents that are applied in the chemical industry. Dr.Hancsók devotes his research to the study and development ofengine fuels, engine oils, and their additives, working with bothfossil and renewable energy sources.

Petroleum-based fuels have been used to power automotive vehicles and industrial production for well over 100 years [1–2]. Petroleum is one of the most important fuels derived fossil energy sources.

Currently, global annual energy consumption is about 12.2 × 109 tons of crude oil. Energy consumption is expected to increase to 17.5 × 109 tons of oil by 2035 [3–9]. Southeast Asia’s energy demand alone will expand by about 75% by 2030 based on the strong economic growth trends in China and India [8–11]. The reserves of oil, gas, and coal that we depend on are therefore declining, and oil production is becoming ever more expensive, and causing significant environmental impact as well.

The industrial sector uses more energy than any other end-user sector, and currently it consumes about half of the world’s total delivered energy [7]. Huge amounts of energy are consumed in manufacturing, mining, and construction, mainly by processing and assembly equipment but also by air conditioning and lighting. Worldwide, industrial energy consumption is expected to grow by 1.75 × 109 tons from 2010 to 2030, while transportation by about 0.6 × 109 tons and other energy consumption by about 0.8 × 109 tons during the same time period [7].

Industrial energy demand varies across countries depending on the level and mixes of economic activity and technological development. About 90% of the increase in world energy consumption is projected to occur in the non-OECD countries, where rapid economic growth is taking place. The key countries—Brazil, Russia, India, and China—will account for more than two-thirds of the growth of non-OECD industrial energy use by 2030 [7,9]. The transportation sector follows the industrial sector in world energy use, and it is of particular inte
rest worldwide, as extensive improvements are being continually made in the quality of engine fuels.

To comply with climate change regulations, the energy sector is required to limit the long-term concentration of greenhouse gases to 450 ppm (mg/kg) of carbondioxide equivalent in the atmosphere so that the global temperature rise can be contained to about 2 °C above the pre-industrial level [12]. In order for this target to be met, energy-related carbon dioxide emissions need to fall to 26.4 gigatonnes (ca. 26.4 × 109 tons) by year 2050 from the level at 28.9 Gt in 2009 [7,13]. Even given this outlook, fossil fuel demand will peak by year 2020.

Globally, the number of vehicles on the road may reach 1 billion (109) by 2011 [15]. The growth is being fueled primarily by the rapidly expanding Asian market, which will see 5.7% average compound annual growth in vehicles in operation in the next three years. Asia will account for more than 23% (231 million vehicles) of global vehicles in use by 2011 [15]. Thus every seventh person in the world will have a vehicle by 2011. Europe and the Americas will account for 34% and 36% of the global share of automobiles by 2011, respectively. The America
s and Western Europe will continue to see approximately 1.3% and 2.0% compound annual growth in the next three years respectively, while Eastern Europe’s vehicle population growth rate is forecasted to be 4.3% [15].

With the growth in the number of vehicles, especially passanger cars with internal combustion engines, fuels consumption has gone up significantly [9,16,17]. This has had a deleterious effect on the environment.

A large part of energy consumption is in form of engine fuels. Fuels for internal combustion engines produced from primarily sources are composed of combustionable molecules. Heat energy is a derivative of fuel’s oxidation, which is converted to kinetic energy. Different gas, liquid, and solid (heavy diesel fuel, which is solid below 20 °C) products are usable as engine fuels [8,9,18–20]. These fuels are classified as crude oil based—namely gasoline, diesel fuels, and any other gas and liquid products [18–21]—and non-crude oil based—namely natural gas based fuels—compressed natural gas (CNG) and dimethyl-ether—biofuels, like methanol, ethanol, any other alcohols and different mixtures of them; biodiesel; biogas oil (mixtures of iso- and n-paraffins from natural tryglicerides). Liquefied petroleum gases (LPG), which can be crude oil or natural gas based, and hydrogen are derivatives from different fuel sources [22–38].

Over the years fuel specifications have evolved considerably to meet the changing demands of engine manufacturers and consumers [20,39–42]. Both engines [43–45] and fuels [9,20,39,41,42] have been improved due to environmental and energy efficiency considerations. New processes have been developed to convert maximum refinery streams into useful fuels of acceptable quality at reasonable refinery margins [8,9,46,47].

Gasoline and diesel fuels have been preferred [20] in the development of engine technology. The price of crude oil is
also often at a level that makes petroleum–based fuels in engines desirable for economic reasons [46,47,53–54]. Whenever crude oil prices do rise, the issue of alternative fuels comes up [9,22–27,48–51], but the discussions and investigations get dropped out soon after crude oil prices settle down [28]. The oil crises of the 1970s and 2008 reflect this tendency. However, oil is not going to last forever, and it is also not going to be exhausted in the near future [5,7,9,10]. So, while the use of petroleum-based fuels and lubricants may continue in the current century, it is likely that a significant decrease will occur after crude oil usage peaks [3,7,10,11,52].

The application of alternative fuels will find a place wherever cost–benefit analyses permit or wherever regulations force their use. (The use of compressed natural gas in all of New Delhi’s city transportation vehicles is an example. This was decreed by the Supreme Court of India and is now being enforced in the other cities of India as well.)

While world gasoline demand is expected to be static and possibly to decrease in future, the consumption of diesel and kerosene, the rail and water transport fuel, will likely expand 1,3% to 15% by 2030 [9,16,17]. With the demand for heavy fuel oil expected to decrease [9,16,17], heavy fuel oil is being converted into lighter products such as LPG, gasoline, and diesel [53–55].

The United States accounts for most of the world’s gasoline demand, whereas in Europe the demand for diesel is increasing [4,9,42] due to the rising number of diesel vehicles [15]. India and several other Asian countries also consume more diesel fuel than gasoline [4,49]. With the development of more fuel-efficient diesel vehicles, the demand for diesel will increase significantly and its use might have to be restricted to meet future demand. However, gasoline-powered engines seem still to be favorable for hybrid vehicles.