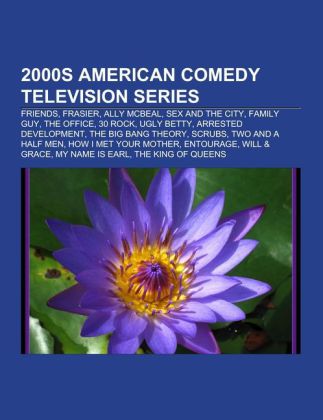 
Friends, Frasier, Ally McBeal, Sex and the City, Family Guy, The Office, 30 Rock, Ugly Betty, Arrested Development, The Big Bang Theory, Scrubs, Two and a Half Men, How I Met Your Mother, Entourage, Will & Grace, My Name Is Earl.
Paperback.
Sprache: Englisch.

Source: Wikipedia. Pages: 153. Chapters: Friends, Frasier, Ally McBeal, Sex and the City, Family Guy, The Office, 30 Rock, Ugly Betty, Arrested Development, The Big Bang Theory, Scrubs, Two and a Half Men, How I Met Your Mother, Entourage, Will & Grace, My Name Is Earl, The King of Queens, Cougar Town, 3rd Rock from the Sun, Tyler Perry's House of Payne, The New Adventures of Old Christine, Everybody Loves Raymond, Parks and Recreation, Curb Your Enthusiasm, Community, Better Off Ted, The Cleveland Show, Accidentally on Purpose, American Dad!, Still Standing, Meet the Browns, Samantha Who?, Fat Guy Stuck in Internet, The Middle, Glenn Martin, DDS, Undeclared, Kitchen Confidential, Party Down, Yes, Dear, Rules of Engagement, Fatherhood, Wild Card, Angela's Eyes, Worst Week, Listen Up!, Important Things with Demetri Martin, Comedy Central Presents. Excerpt: The Office is an American comedy television series broadcast by NBC. An adaptation of the previous BBC series of the same name, it depicts the everyday lives of office employees in the Scranton, Pennsylvania, branch of the fictional Dunder Mifflin Paper Company. To simulate the look of an actual documentary, it is filmed in a single-camera setup, without a studio audience or a laugh track. The Office was adapted for American audiences by executive producer Greg Daniels, a veteran writer for Saturday Night Live, King of the Hill, and The Simpsons. The creators of the original BBC series, Ricky Gervais and Stephen Merchant, are executive producers and also co-wrote the pilot episode with Daniels and wrote the season three episode, "The Convict". It is co-produced by Daniels' Deedle-Dee Productions, and Reveille Productions, in association with Universal Media Studios. The show debuted on NBC as a midseason replacement on March 24, 2005. Off-network syndication of The Office began in early 2008, notably on TBS and Fox-owned stations in the United States. The Office was renewed for a seventh season which premiered on September 23, 2010. Steve Carell confirmed that season seven would be his last season on the show. Despite this, NBC renewed the series for an eighth season on March 17, 2011. NBC programmer Kevin Reilly originally suggested Paul Giamatti to producer Ben Silverman for the role of Michael Scott, but the actor declined. Martin Short, Hank Azaria and Bob Odenkirk were also reported to be interested. In January 2004, Variety reported Steve Carell, of the popular Comedy Central program The Daily Show with Jon Stewart, was in talks to play the role. At the time, he was already committed to another NBC mid-season replacement comedy, Come to Papa, but the series was quickly canceled, leaving him fully committed to The Office. Carell later stated he had only seen about half of the original pilot episode of the British series before he auditioned. He did not continue
Kunden, die diesen Artikel gekauft haben, kauften auch
Schreiben Sie eine Rezension