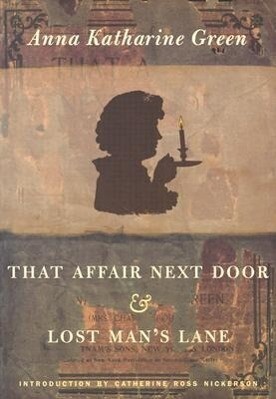 That Affair Next Door and Lost Man's Lane

Two 19th century mysteries by one of the founding mothers of the genre.

Anna Katharine Green (1846-1935) was a well-reviewed and commercially successful author of detective novels. She wrote thirty-four novels and four collections of stories.Catherine Ross Nickerson is Associate Professor of English at Emory University. She is the author of "The Web of Iniquity: Early Detective Fiction by American Women, " also published by Duke University Press.

"[F]un to read... Butterworth is an old snoop, but a crafty one... Nickerson's introduction] makes a resounding case for the importance of [Green] in the development of the mystery."--Booklist "[D]elightful, illuminating, and thoroughly readable... Hats off to Catherine Ross Nickerson ... for shining a light on these long-neglected women."--Adam Woog, Seattle Times "The publication of [Green's books] is a useful jolt, prompting us to recognize that me may have been disinclined to look for evidence that would disturb the neat contrasts of our potted history of the detective genre... Green can hold her own with any mystery novelist... [T]he republication of That Affair Next Door and Lost Man's Lane should prompt general rejoicing... [A] terrific mystery... [O]ne of the most entertaining books I've lately had the pleasure of reading."--Lisa Berglund, The Drood Review "Heads up Jane Marple, Arly Hanks, Kinsey Milhone et al. Preceding you is Miss Amelia Butterworth, the middle-aged spinster creation of Anna Katharine Green (1846-1935). Happily, Duke Press has reprinted two of her novels, out of print for the last hundred years... Green starts off both novels fast with an intriguing incident and ends both with a dramatic climax. Her gothic elements add to the suspense. At various points in both novels the reader will think that s/he knows what is coming. S/he will be wrong... This two in one volume is HIGHLY RECOMMENDED to all mystery lovers."--Janet Overmyer, ILoveAMystery.com "Kudos to Duke for reprinting these suspenseful tales and rejuvenating the reputation of an undeservedly long-forgotten writer!"--Janet Overmyer, Mysterious Women "[A] must-read, mainly for its sparky, opinionated and very funny leading character. Amelia more than holds her own amongst the nosy spinsters of the Golden Age and beyond."--Sharon Wheeler, Reviewing the Evidence "If you are fond of Louisa May Alcott, you will like the tone, the suspense, the romance, and the view of women... I hugely enjoyed rereading these tales, emblematic of a more intimate, mannered world where the home needed cleansing of hypocrisy and the abuse of (male) power, even if it needed an assist by a male detective." --The Poisoned Pen Classic Crimes Newsletter "Green writes entertainingly, and she gives us a picture of middle-class life in late 19th-century New York which is full of historical interest." --Charlotte Mitchell, The Spectator "For readers who think that Lifetime movies and the muddled genre books that combine romance and serial killers are a product of our tawdry age, Duke University Press has reprinted four 19th-century sensationalist classics that are titillating, vulgar, and moralistic by turns, full of violent action and passion, and as shallow and materialistic as reality television. Such fiction, however, provided an arena for women eager to become writers, and the novels collected in these two volumes--which each contain a fine introduction by scholar Catherine Ross Nickerson--display how vital that opportunity was."--Kris Lawson, Rain Taxi "Readers interested in the development of detective fiction and popular fiction will welcome these volumes, which make available hitherto hard-to-find short novels... Highly recommended."--B. Diemert, CHOICE "[That Affair Next Door] is leisurely paced but not padded, and the detecting rivalry of amateur and professional is humorously and sensitively managed. Much of its careful plotting and attention to detail would be at home in a formal detective novel of decades later, though the final solution conies from a witness with an explanation anticipated by neither Gryce nor Butterworth. The surprise killer, though probably anticipated by latter-day readers, must have been a sensation in 1897."--Jon L. Breen, The Weekly Standard "[Green's] stories are a rich mixture of forensic techniques, complex puzzles and detailed characterisation..."--South China Morning Post "[H]ighly readable... Green's two novels are an excellent example of how women writers used popular genres to interrogate women's place in the not-so-separate spheres of work and home."-- Jennifer Putzi, Legacy