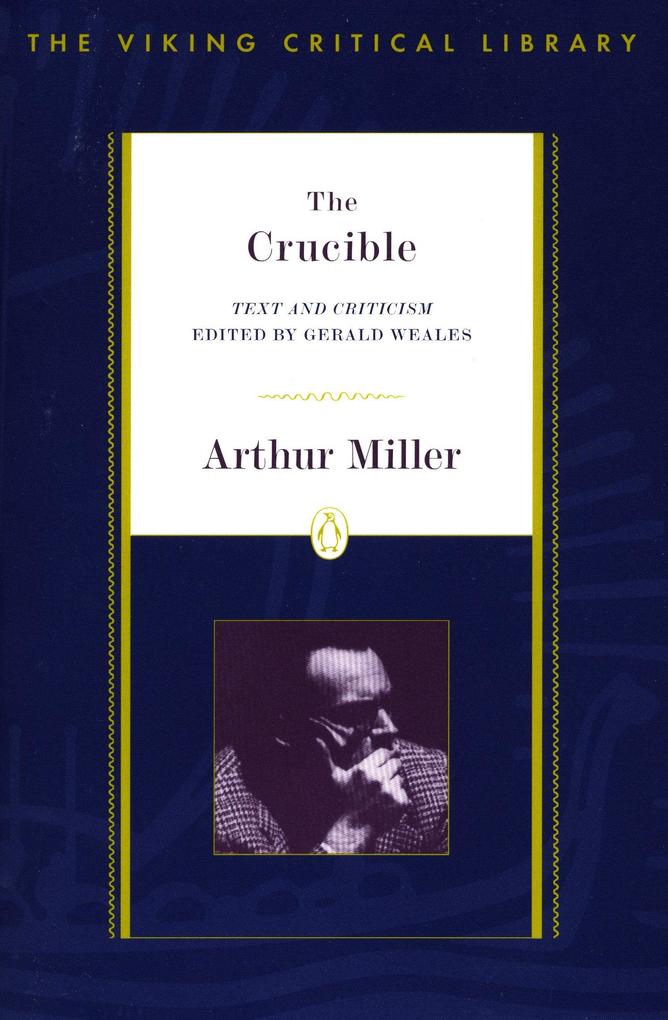 "I believe that the reader will discover here the essential nature of one of the strangest and most awful chapters … weiterlesen
Dieser Artikel ist auch verfügbar als:
Geschenk per Mail versenden
Taschenbuch

A haunting examination of groupthink and mass hysteria in a rural community, presented here with enlightening criticism and commentary

"I believe that the reader will discover here the essential nature of one of the strangest and most awful chapters in human history," Arthur Miller wrote in an introduction to The Crucible, his classic play about the witch-hunts and trials in seventeenth-century Salem, Massachusetts. Based on historical people and real events, Miller's drama is a searing portrait of a community engulfed by hysteria.

In the rigid theocracy of Salem, rumors that women are practicing witchcraft galvanize the town's most basic fears and suspicions; and when a young girl accuses Elizabeth Proctor of being a witch, self-righteous church leaders and townspeople insist that Elizabeth be brought to trial. The ruthlessness of the prosecutors and the eagerness of neighbor to testify against neighbor brilliantly illuminate the destructive power of socially sanctioned violence.

Written in 1953, The Crucible is a mirror Miller uses to reflect the anti-communist hysteria inspired by Senator Joseph McCarthy's "witch-hunts" in the United States. Within the text itself, Miller contemplates the parallels, writing: "Political opposition...is given an inhumane overlay, which then justifies the abrogation of all normally applied customs of civilized behavior. A political policy is equated with moral right, and opposition to it with diabolical malevolence."
This Viking Critical Library edition of Arthur Miller's dramatic recreation of the Salem witch trials contains the complete text of The Crucible as well as extensive critical and contextual material about the play and the playwright, including:

The CrucibleIntroduction
Chronology
I. THE CRUCIBLE: THE TEXTA Note on the Text
II. THE CRUCIBLE: CRITICISM AND ANALOGUESMiller on The Crucible
Many Writers: Few Plays
Introduction to Collected Plays
Brewed in The Crucible
[More on Danforth]
After the Fall (excerpt)
III. THE CRUCIBLE IN PRODUCTION: COMMENTS AND REVIEWSHenry Hewes, Arthur Miller and How He Went to the Devil
Walter Kerr, The Crucible
Brooks Atkinson, At the Theatre
Brooks Atkinson, Arthur Miller's The Crucible in a New Edition
New York Post, Witchcraft and Stagecraft
Joseph T. Shipley, Arthur Miller's New Melodrama Is Not What It Seems to Be
Eric Bentley, The Innocence of Arthur Miller
Robert Warshow, The Liberal Conscience in The Crucible
Harold Hobson, Fair Play
Herbert Blau, Counterforce I: The Social Drama
Marcel Aymeé, I Want to Be Hanged Like a Witch
Jean SElz, Raymond Rouleau Among the Witches
THE CRUCIBLE IN RETROSPECT: ESSAYS ON THE PLAYDavid Levin, Salem Witchcraft in Recent Fiction and Drama
Penelope Curtis, The Crucible
Stephen Fender, Precision and Pseudo Precision in The Crucible
THE CRUCIBLE IN RETROSPECT: ESSAYS ON THE PLAYWRIGHTWilliam Wiegand, Arthur Miller and the Man Who Knows
Richard H. Rovere, Arthur Miller's Conscience
Albert Hunt, Realism and Intelligence
Gerald Weales, Arthur Miller: Man and His Image
Lee Baxandall, Arthur Miller: Still the Innocent
CONTEXTS OF THE CRUCIBLE: HISTORICALA Note on Witchcraft
Records of Salem Witchcraft
Deodat Lawson, A Brief and True Narrative
Robert Calef, More Wonders of the Invisible World
John Hale, A Modest Enquiry into the Nature of Witchcraft
CONTEXTS OF THE CRUCIBLE: CONTEMPORARYAldous Huxley, The Devils of Loudun
Henry Steele Commager, Who Is Loyal to America?
Joseph R. McCarthy, Communists in the State Department
Whittaker Chambers, Witness
The Reporter, The Road to Damascus
THE CRUCIBLE: SPIN-OFFSBernard Stambler, The Crucible
Jean-Paul Sartre, On Les Sorcières de Salem; In Salem Prison
THE CRUCIBLE: ANALOGUESBernard Shaw, Saint Joan
Mark Twain, Tom Sawyer
Budd Schulberg, WaterfrontTopics for Discussion and Papers
Bibliography