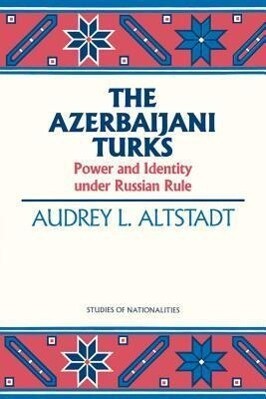 von Audrey L. Altstadt
New. Sprache: Englisch.
Taschenbuch
This is the first comprehensive account of Azerbaijan's rich and tumultuous history up to the present time. The Azerbaijan Republic is situated where ancient Media once stood, a territory invaded and influenced by Persian king Cyrus the Great, Alexan … weiterlesen
Geschenk per Mail versenden
Taschenbuch

This is the first comprehensive account of Azerbaijan's rich and tumultuous history up to the present time. The Azerbaijan Republic is situated where ancient Media once stood, a territory invaded and influenced by Persian king Cyrus the Great, Alexander of Macedonia, and Pompey's Roman legions. Since the early nineteenth century its Muslim Turkish people have been ruled by Russia, first by the imperial tsars and then by the Soviet regime. In 1990, two centuries of harsh domination culminated in Black January when Soviet troops opened fire on the civilian population of Baku. The following year, Azerbaijan declared its independence and began rebuilding its political and economic system. Former Communists and opposition leaders continue to struggle for dominance. Audrey L. Altstadt makes use of both Russian-language and Azerbaijani Turkish-language newspapers, journals, and scholarly publications. Much of this material has never been used in any other Western studies. Altstadt's original research adds the Azerbaijani perspective on the two-century relationship between Russia and Azerbaijan. She identifies key issues and actors and documents a pattern of continual struggle against colonial rule from the initial conquest to the political movements of the late twentieth century. Russian domination has encompassed more than the military, political, and economic spheres. There have also been harsh restrictions on cultural expression, including killing leading intellectuals and falsifying historical facts. However, Azerbaijani Turks continue to thwart Russian control by protecting their rich and ancient heritage through native-language education and the arts. As Altstadt writes, "the AzerbaijaniTurks use the antiquity of their history, language, and literature as a weapon of self-defense, as proof they need no tutelage in self-government, economic management, education, or literature".

Audrey L. Altstadt received her Ph.D. from the University of Chicago and has received postdoctoral fellowships from the Russian Research Center at Harvard University and the George F. Kennan Institute of Advanced Russian Studies. She conducted research in Baku, Azerbaijan, during the 1980-81 and 1984-85 and was the first American to gain access to the Azerbaijan State Historical Archives. She is currently a member of the history department at the University of Masschusetts at Amherst.

Taschenbuch
Macedonia and the Macedonians: A History
von Andrew Rossos

Taschenbuch
Estonia and the Estonians: Second…
von Toivo U. Raun