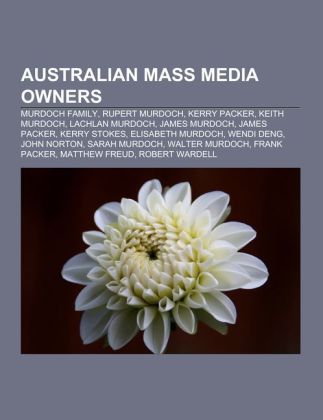 Source: Wikipedia. Pages: 27. Chapters: Murdoch family, Rupert Murdoch, Kerry Packer, Keith Murdoch, Lachlan Murdoch, James Murdoch, James Packer, Kerry Stokes, Elisabeth Murdoch, Wendi Deng, John Norton, Sarah Murdoch, Walter Murdoch, Frank Packer, Matthew Freud, Robert Wardell, Ezra Norton, Rodd Partridge, Clyde Packer, Robert Clyde Packer, Peter Ivany. Excerpt: Keith Rupert Murdoch, AC, KSG (English pronunciation: ; born 11 March 1931) is an Australian-American media magnate and the Chairman, and CEO of . Beginning with one newspaper in Adelaide, Murdoch acquired and started other publications in his native Australia before expanding News Corp. into the United Kingdom, United States and Asian media markets. Although it was in Australia in the late 1950s that he first dabbled in television, he later sold these assets, and News Corp's Australian current media interests (still mainly in print) are restricted by cross-media ownership rules. Murdoch's first permanent foray into TV was in the USA, where he created Fox Broadcasting Company in 1986. In the 2000s, he became a leading investor in satellite television, the film industry and the Internet, and purchased a leading American newspaper, The Wall Street Journal. Rupert Murdoch was listed three times in the Time 100 as one among the most influential people in the world. He is ranked 13th most powerful person in the world in the 2010 Forbes' The World's Most Powerful People list. With a net worth of US$6.3 billion, he is ranked 117th wealthiest person in the world. Keith Rupert Murdoch was born in Melbourne, the only son of Sir Keith Murdoch and Elisabeth Joy (née Greene). At the time, his father was a regional newspaper magnate based out of Melbourne, and as a result, the family was wealthy. Murdoch was groomed by his father from an early age, and attended the elite Geelong Grammar School. He later read Philosophy, Politics and Economics at Worcester College, Oxford University in the United Kingdom, where he supported the Labour Party. When Murdoch was 22, his father died, prompting his return from Oxford to take charge of the family business; becoming managing director of News Limited in 1953. He began to direct his attention to acquisition and expansion. He bought the Sunday Times in Perth, Western Australia. Over the next few years, Murdoch established himself in Australi
Kunden, die diesen Artikel gekauft haben, kauften auch
Schreiben Sie eine Rezension