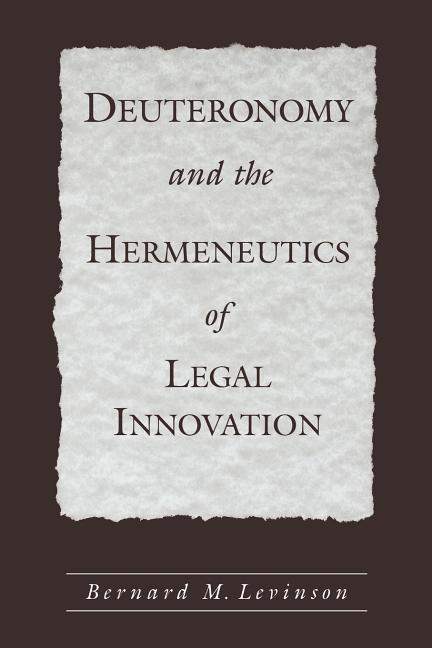 Deuteronomy and the Hermeneutics of Legal Innovation

Positioned at the boundary of traditional biblical studies, legal history, and literary theory, Deuteronomy and the Hermeneutics of Legal Innovation shows how the legislation of Deuteronomy reflects the struggle of its authors to renew late seventh- century Judean society. Seeking to defend
their revolutionary vision during the neo-Assyrian crisis, the reformers turned to earlier laws, even when they disagreed with them, and revised them in such a way as to lend authority to their new understanding of God's will. Passages that other scholars have long viewed as redundant,
contradictory, or displaced actually reflect the attempt by Deuteronomy's authors to sanction their new religious aims before the legacy of the past.
Drawing on ancient Near Eastern law and informed by the rich insights of classical and medieval Jewish commentary, Levinson provides an extended study of three key passages in the legal corpus: the unprecedented requirement for the centralization of worship, the law transforming the old Passover
into a pilgrimage festival, and the unit replacing traditional village justice with a professionalized judiciary. He demonstrates the profound impact of centralization upon the structure and arrangement of the legal corpus, while providing a theoretical analysis of religious change and cultural
renewal in ancient Israel. The book's conclusion shows how the techniques of authorship developed in Deuteronomy provided a model for later Israelite and post- biblical literature.
Integrating the most recent European research on the redaction of Deuteronomy with current American and Israeli scholarship, Levinson argues that biblical interpretation must attend to boththe diachronic and the synchronic dimensions of the text. His study, which provides a new perspective on
intertextuality, the history of authorship, and techniques of legal innovation in the ancient world, will engage pentateuchal critics and historians of Israelite relig

In my judgment it provides a better model than any previously developed for understanding the motivation and interpretative techniques that lie behind Deuteronomy. John Barton, Journal of Religion Through his detailed examination of texts, Levinson documents a revolution in ancient Israel's religious life and social history. The Journal of Theological Studies