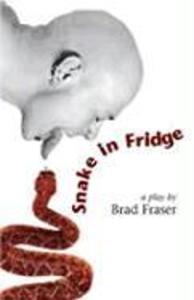 Brad Fraser is an award-winning and internationally renowned playwright with a reputation for being dark, witty, often shocking, and always controversial. Born in Edmonton, Alberta, in 1959, Fraser has been writing for theatre and winning awards since his teens. Besides being a playwright, Brad Fraser has been a playwright-in-residence, a celebrity spokesperson for The AIDS Network of Edmonton, and has conducted interviews with many interesting people including Kim Campbell and kd lang. Fraser's success as a playwright was predicted early on... While Maclean's magazine told us Fraser was one of "100 Canadians to watch" Variety said he'd be "a major new force in North American play writing". His plays have been produced worldwide including Edmonton, Calgary, Vancouver, Toronto, Montreal, Chicago, Cincinnati, Washington DC, New York, Edinburgh, London, Sydney, Milan, and Tokyo. Brad Fraser currently lives in Toronto.