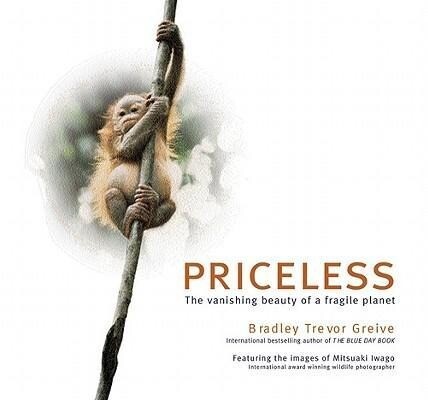 Priceless: The Vanishing Beauty of a Fragile Planet

15% Rabatt³ sichern mit Gutscheincode: 15PROZENT
​
Everyone has heard about animals that are now extinct. But author Bradley Trevor Greive wants everyone to learn about animals that can be saved?and then to do something about it.In inspiring narrative and striking photographs of everything from humpb … weiterlesen
Geschenk per Mail versenden
Taschenbuch

Everyone has heard about animals that are now extinct. But author Bradley Trevor Greive wants everyone to learn about animals that can be saved?and then to do something about it.In inspiring narrative and striking photographs of everything from humpback whales to pigmy possums to African spoonbills, Greive and wildlife photographer Mitsuaki Iwago spell out Earth's diverse animal inventory. They highlight species that once were plentiful but now are scarce?some that are now sadly extinct?and point out specific dangers that other animals face.The authors also present a call to action: ?To preserve our home and the priceless creatures that dwell within it you need only see the world as it is and have a vision of how it could be.? Priceless is a must-have book for everyone interested in the environment, biodiversity, and in all life on Earth

Since the debut of his international bestseller "The Blue Day Book," Bradley Trevor Greive has become a household name in more than 115 countries. A former Australian paratrooper, BTG left the army to pursue more creative misadventures. He has been bitten by wild monkeys and rabid bats and was accepted into Russia's cosmonaut training program-though those incidents were, by and large, unrelated. BTG spends most of his time in a tiny Tasmanian hamlet. Author Bradley Trevor Greive has four international best-sellers to his credit: Looking for Mr. Right, Dear Mom, The Meaning Of Life, and The Blue Day Book. In addition to writing engaging and entertaining books, BTG is an artist, cartoonist, poet, furniture and toy designer, screenwriter, and ex-paratroop platoon leader. Although a Tasmanian by birth, he presently lives in Sydney, Australia, with his rabbit, Biff. Mitsuaki Iwago is among the world's foremost wildlife photographers. For over 20 years he has taken award-winning images in more than 70 countries, and his work has appeared in numerous magazines, including National Geographic. He is the author of over a dozen books, including the worldwide best-sellers Serengeti: Natural Order on the African Plain, Mitsuaki Iwago's Whales, Mitsuaki Iwago's Kangaroos, Mitsuaki Iwago's Penguins, and In the Lion's Den. He presently lives in Japan but is more likely to be found