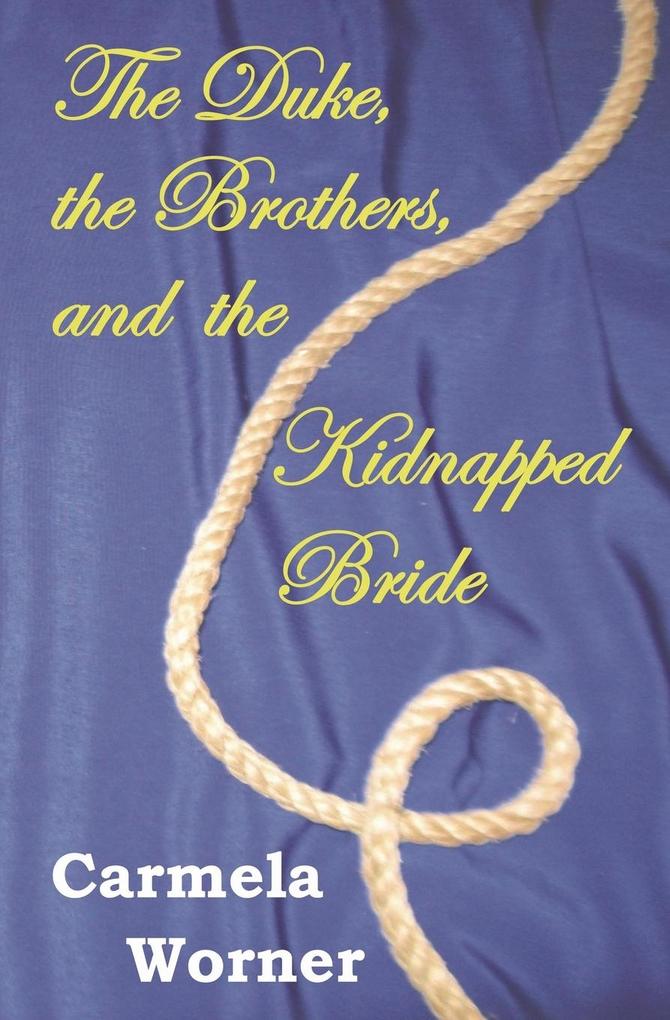 The Duke, the Brothers, and the Kidnapped Bride

Titel: The Duke, the Brothers, and the Kidnapped Bride
Autor/en: Carmela Worner

Set in the early 1800s, just prior to and during the war of 1812, a young woman (Rebecca Layton) living in Charleston, South Carolina, has just discovered that she's betrothed to an English duke (Harold Blackstone). She doesn't want to get married, so when the duke sends her a letter requesting her presence for the nuptials, she responds with a letter of her own informing him that the wedding is off. Harold doesn't really want to marry her either, but is compelled by his grandmother to do so. It is an ultimatum--either he marries Rebecca, or upon his grandmother's death Rebecca will inherit everything and he will be penniless. So he and his bachelor friend from college sail across the ocean to "simply take her" home to England.
They discover that it's not so easy when she proves to be a very headstrong, independent woman. However, her three "brothers" (lifelong close male friends) believe she can be happy with Harold and hatch a plan to help Harold "kidnap" her and take her aboard his ship to England. The "brothers" go, of course, as bodyguards to their dear friend. Once aboard the ship, the would-be lovers have problems. Rebecca wants to get to know Harold better and learn the details of what's expected of her as Harold's wife: in particular, the making of babies. Harold would be happy to show her, but every time they get together, Rebecca's "brothers" step in and prevent it. Plus, Harold doesn't want to ruin his grandmother's plans for an elaborate church wedding by compromising her. That is, until one night when Harold gets drunk and finds Rebecca playing cards with her male friends. He gets angry, steals a gun and threatens the "brothers" and his friend, taking Rebecca into his cabin. But instead of compromising her as he intended, he vomits and passes out.
After many misunderstandings, mishaps and misadventures, the two finally realize they love each other and are ready for a happily ever after.

Born in east Texas, Carmela Worner has loved books and loved to write for as long as she can remember. She moved with her parents and family to Pueblo, Colorado, at the age of seven. As a young woman, she had several stories and poems published in romance magazines. She has three children and nine grandchildren. She's a retired nurse and lives in Pueblo with her husband, Elroy Worner. She and Elroy co-authored Frugal Utopia: Savings and Health. Her publisher is Shangri-La Press. More information is available about Shangri-La Press on its Facebook page.

Schreiben Sie eine Bewertung für: The Duke, the Brothers, and the Kidnapped Bride