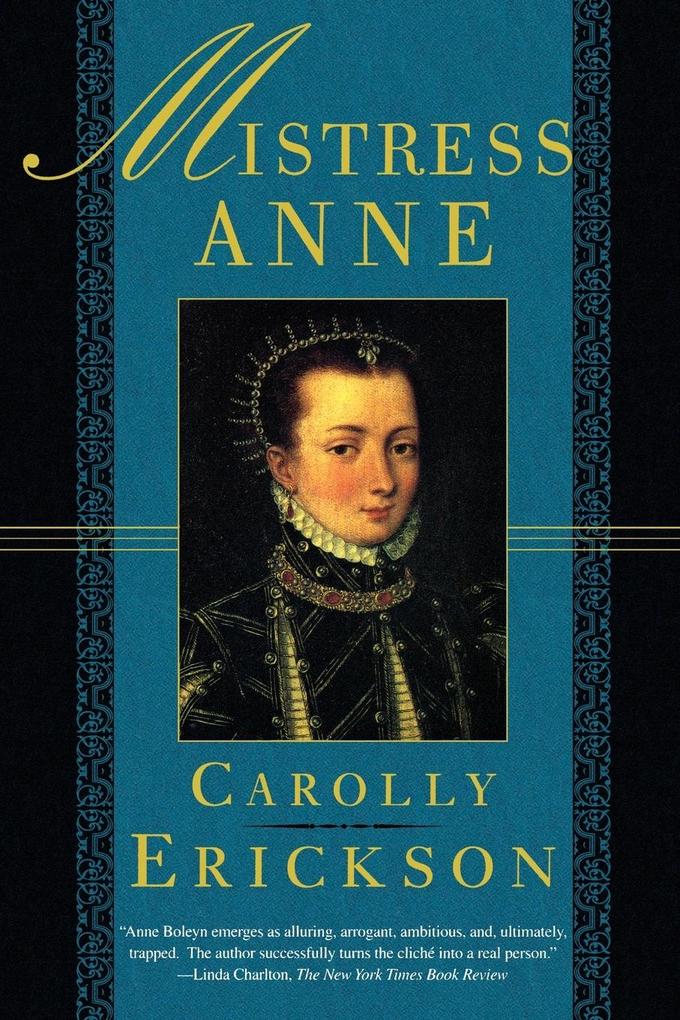 As Maureen Quilligan wrote in the "New York Times Book Review" of "The First Elizabeth," Anne Boleyn "was a real victim of the sexual scandals her brilliant daughter escaped, and a subject Ms. Erickson's sensitivity to sexual and political nuance should well serve." Indeed, Carolly Erickson could have chosen no more fascinating and appropriate a subject. Alluring and profoundly enigmatic, Anne Boleyn has eluded the grasp of historians for centuries.

Through her extraordinarily vivid re-creation of this most tragic chapter in all Tudor History, Carrolly Erickson gives us unprecedented insight into the singuarlity of Anne Boleyn's life, the dark and overwhelming forces that shaped her errant destiny, and the rare, tumultuous times in which she lived.

Distinguished historian Carolly Erickson is the author of "Rival to the Queen," "The Memoirs of Mary Queen of Scots," "The First Elizabeth," "The Hidden Life of Josephine," "The Last Wife of Henry VIII, " and many other prize-winning works of fiction and nonfiction. Her novel "The Tsarina's Daughter" won the "Romantic Times" Reviewer's Choice Award for Best Historical Fiction. She lives in Hawaii.

"Anne Boleyn emerges as alluring, arrogant, and, ultimately trapped. The author successfully turns the cliche into a real person." --Linda Charlton, "The New York Times Book Review"
"What more intriguing subject, then, for a historian who has chosen to concentrate on the Tudor period, and whose previous studies of Henry VIII, Queen Mary, and Queen Elizabeth have been hailed for impeccable scholarship, graceful phrasing, and almost addictive readability--for the vividness and immediacy usually only found in the best novels." --Alida Becker, "The Philadelphia Inquirer"
"Erickson is one of the most accomplished and successful biographers writing in English."
--"London Times Literary Supplement"
"This book is highly enjoyable as well as being reilable and acute, indeed, it is popular historical biography at its best." --Christopher Hibbert, "London Times"