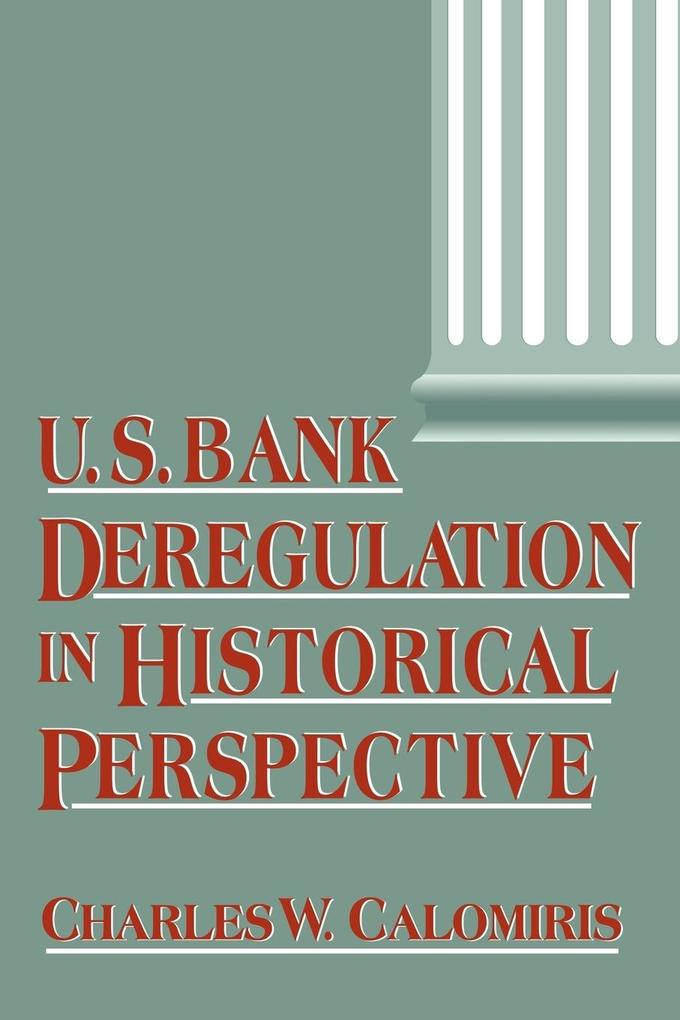 von Charles W. Calomiris
Paperback. Sprache: Englisch.
Taschenbuch
This book shows how deregulation is transforming the size, structure, and geographic range of U.S. banks, the scope of banking services, and the nature of bank-customer relationships. Over the past two decades the characteristics that had made Americ … weiterlesen
Geschenk per Mail versenden
Taschenbuch

This book shows how deregulation is transforming the size, structure, and geographic range of U.S. banks, the scope of banking services, and the nature of bank-customer relationships. Over the past two decades the characteristics that had made American banks different from other banks throughout the world--a fragmented geographical structure of the industry, which restricted the scale of banks and their ability to compete with one another, and strict limits on the kinds of products and services commercial banks could offer--virtually have been eliminated. Understanding the origins and persistence of the unique banking regulations that defined U.S. banking for over a century lends an important perspective on the economic and political causes and consequences of the current process of deregulation.

'... a provocative set of papers, each well argued and well documented.' Journal of Financial History Review 'Banks carry history in their structure, and Calomiris is an enthusiastic and perceptive guide to the tangled history and current structure of U.S. banking. His stimulating essays expose the origins and the costs of the American preference for fragmented banking. They reveal how bank regulations change to compensate for problems of previous regulations, resulting in the kaleidoscope of banking institutions in the United States today. Anyone interested in bank finance will want to read Calomiris's essays for their insights about the present and past, and the light they shed on the future of U.S. banking.' Peter Temin, Massachusetts Institute of Technology 'U.S. Bank Deregulation in Historical Perspective is a scholarly work of distinction. It explores in depth the economic, political, and legal contexts of the swing in the pendulum from over 100 years of restrictive regulation that limited the size and scope of U.S. banks to liberalizing deregulation in the 1980s and 1990s culminating in the Financial Institutions Modernization Act of 1999.' Anna J. Schwatz, National Bureau of Economic Research 'Charles W. Calomiris's brilliant U.S. Bank Deregulation in Historical Perspective is a valuable addition to the growing body of excellent research studies dealing with history of finance and financial institutions. His chapters persuasively explain how the path of U.S. banking institution evolution depended on key transient events and unique national circumstances. Its initial chapters analyse how the interplay of political-economic forces encouraged the formation of regulatory structures that fostered the preservation of a highly fragmented banking system through the 1960s. The latter chapters show how regulation became transformed beginning in the 1970s and place greater emphasis on achieving efficiency by fostering increased banking concentration, diversification and globalization. The book is must reading not only for financial historians but also for economists, historians and political scientists interested in the problem of business-government relations.' Paul Miranti, Rutgers Univerisity 'I enthusiastically recommend the book to both banking scholars who will find that it offers a bold, coherent vision of the industry's evolution, and to general economists who will enjoy seeing the basic tools of economics used so deftly. The Calomiris view is sure to command attention as the debate over the evolution of the financial services industry continues.' Anil Kashyap, University of Chicago