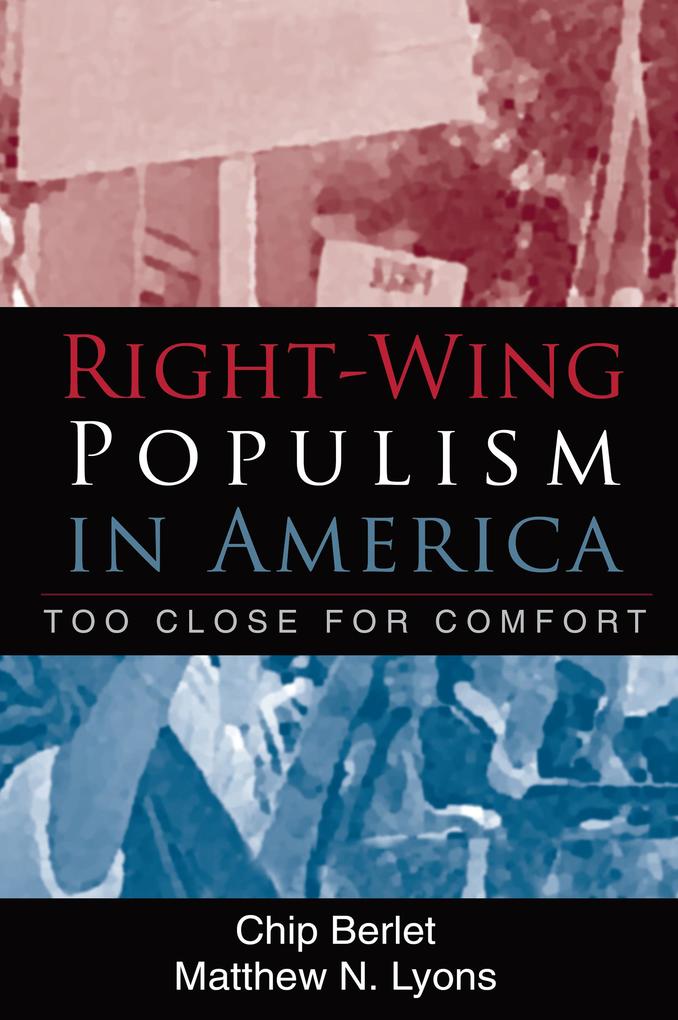 Right-Wing Populism in America: Too Close for Comfort

15% Rabatt³ sichern mit Gutscheincode: 15PROZENT
​
Right-wing militias and other anti-government organizations have received heightened public attention since the Oklahoma City bombing. While such groups are often portrayed as extremists, the values they espouse have influenced mainstream politics an … weiterlesen
Geschenk per Mail versenden
Taschenbuch

Right-wing militias and other anti-government organizations have received heightened public attention since the Oklahoma City bombing. While such groups are often portrayed as extremists, the values they espouse have influenced mainstream politics and culture far more than most Americans realize. This important volume offers an in-depth look at the historical roots and current landscape of right-wing populism in the United States.

Chip Bertlet has written about rigt-wing movements for over 20 years, with bylines in The New York Times, The Boston Globe, The Progressive, and the scores of other publications. He is senior analyst at Political Research Associates in Somerville, MA, and editor of Eyes Right!: Challenging the Right-Wing Backlash. He has contributed articles and chapters to several scholaraly books and journals, has been cited in newsweek, and has appeared on National Public Radio and Nightline. Mathew N. Lyons is a historian, activist, and writer whose work has focused on systems of oppression and social movements. He is research associate for teh Hansberry-Nemiroff Archival, Educational, and Cultural Fund, and author of The Grassroots Network: Radical Nonviolence in the Fedral Republic of Germany, 1972-1985.

"This book shines brilliant light on right-wing populist movements that have undermined democracy throughout U.S. history--and are still influencing politics and policies today. The book shows how populist rhetoric has been used by far-right and mainstream politicians alike to divide people with scapegoating and deflect them from achieving greater social and economic equity." --Holly Sklar, author of "Chaos or Community?: Seeking Solutions, Not Scapegoats for Bad Economics"
"This long-awaited history and critical analysis has arrived right on time. The increased presence of the Right in this country has confused many people with its varied shapes and forms. This book gives the context needed for students and monitors of the Right to understand why these antidemocratic forces continue to thrive in our society." --Suzanne Pharr, author of "In the Time of the Right: Reflections on Liberation," and "Homophobia: A Weapon of Sexism"
"This book makes significant strides toward a greater understanding of right-wing social movements in the United States. Berlet and Lyons present a holistic sociopolitical history that avoids many common theoretical pitfalls and oversimplifications. Instead of separating right-wing organizations into 'mainstream' and 'extremist' groups, these authors examine shades of populist ideologies that lead to both convergence and contradiction on the American political landscape. Their timely and compelling arguments lead us to reevaluate our definitions of these social movements and call for a reexamination of ineffective social policies aimed at containing right-wing groups. This accessible and engaging book is appropriate for use in undergraduate and graduate classes and will also be useful for a more general readership." --Stephanie Shanks-Meile, Department of Sociology and Anthropology, Indiana University Northwest
"Chip Berlet has been a valuable resource for many years to everyone concerned about the potentially dangerous ri