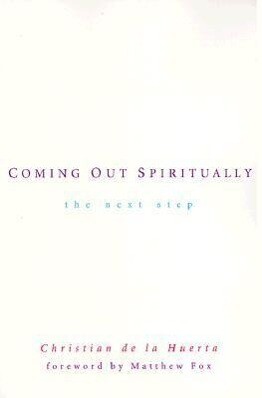 Coming Out Spiritually: The Next Step

In these times of dramatic social change, when the highly charged issue of homosexuality is undeniably causing controversy in many arenas--religion, marriage, politics, education, the military--Christian de la Huerta, founder and director of Q-Spirit, offers a fresh outlook on gay spirituality and how to assert it.A spiritual awakening is occurring in the gay, lesbian, bisexual, and transgendered community, as in much of the world. In this encompassing guidebook, de la Huerta looks at Buddhism, Christianity, Judaism, Hinduism, Taoism, Sufism, New Thought, New Age, and Earth-based religions, including Native American. Cogently investigating these traditions' attitudes, teachings, and policies toward homosexuality, the author gives the queer reader a foundation from which to begin building a spiritual connection. Coming Out Spiritually also synthesizes ten spiritual roles or archetypes people we now call gay or queer have often assumed and continue to enact today: creators of beauty, consciousness scouts, mediators, shamans, and healers, among others. Drawing on these models while acting as a guide to the queer community, the author shows how to look deeper inside; to reach higher than ever before; to step forth more fully into a rightful self. An impassioned call to action, Coming Out Spiritually alternatively touches, challenges, encourages, and supports the queer community to fully reclaim its spiritual heritage.

Christian de la Huerta is founder and executive director of Q-Spirit, an international network of gays and lesbians in spirituality. He also hosts Spirit Wave, a weekly Internet radio program promoting personal growth and spiritual development in the gay community. He lives in San Francisco.