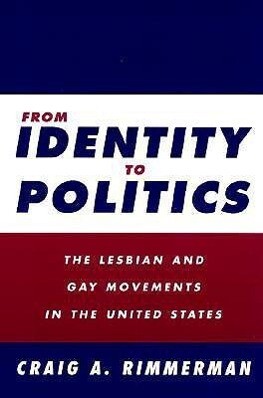 From Identity to Politics: Lesbian & Gay Movements in the U.S.

von Craig Rimmerman
New. Sprache: Englisch.
Taschenbuch
Liberal democracy has provided a certain degree of lesbian and gay rights. But those rights, as we now know, are not unlimited, and they continue to be the focus of efforts by lesbian and gay movements in the United States to promote social change. I … weiterlesen
Dieser Artikel ist auch verfügbar als:
Geschenk per Mail versenden
Taschenbuch

Liberal democracy has provided a certain degree of lesbian and gay rights. But those rights, as we now know, are not unlimited, and they continue to be the focus of efforts by lesbian and gay movements in the United States to promote social change. In this compelling critique, Craig Rimmerman looks at the past, present, and future of the movements to analyze whether it is possible for them to link identity concerns with a progressive coalition for political, social, and gender change, one that takes into account race, class, and gender inequalities.
Enriched by eight years of interviews in Washington, D.C., and New York City and by the author's experience as a Capitol Hill staffer, From Identity to Politics will provoke discussion in classrooms and caucus rooms across the United States.

Craig A. Rimmerman is Professor of Political Science at Hobart and William Smith Colleges. He is the author of several books, including The New Citizenship.

"Rimmerman points a wide angle lens in the direction of the gay and lesbian movement, allowing him to capture the full breadth of its organizations and their varied strategies. He brings toughminded analysis to his topic, and is willing to challenge strategies for change that he finds bankrupt. The result is a book whose insights can only invigorate gay and lesbian politics in the United States today." --John D'Emilio, Professor of Gender and Women's Studies, University of Illinois at Chicago and author of Sexual Politics, Sexual Communities "Craig Rimmerman has written the best kind of academic book, one that is rich in factual detail yet broad in its perspective. His critique of the current lesbian and gay movements clarifies the limitations that are inherent in a narrow identity politics and makes a strong case for building even broader coalitions and doing more grassroots organizing. Any student of social movements, and especially students of the lesbian and gay movements, will find this book a rewarding read." --Patricia A. Cain, author of Rainbow Rights: The Role of Lawyers and Courts in the Lesbian and Gay Civil Rights Movement "Craig Rimmerman has written an insightful book that belongs on the bookshelf of not only students of gay and lesbian politics, but of everyone interested in social movements. His thoughtful critique of various strategies that various movement activists have chosen will be enormously helpful to academics and activists alike." --Clyde Wilcox, Department of Government, Georgetown University "Rigorous but accessible, this poli-sci take on the struggle for gay and lesbian rights offers a blueprint for those readers interested in actively linking identity-driven movements with broader progressive agendas concerning class, race and gender issues to forge a coalition for social and political change." --Publishers Weekly