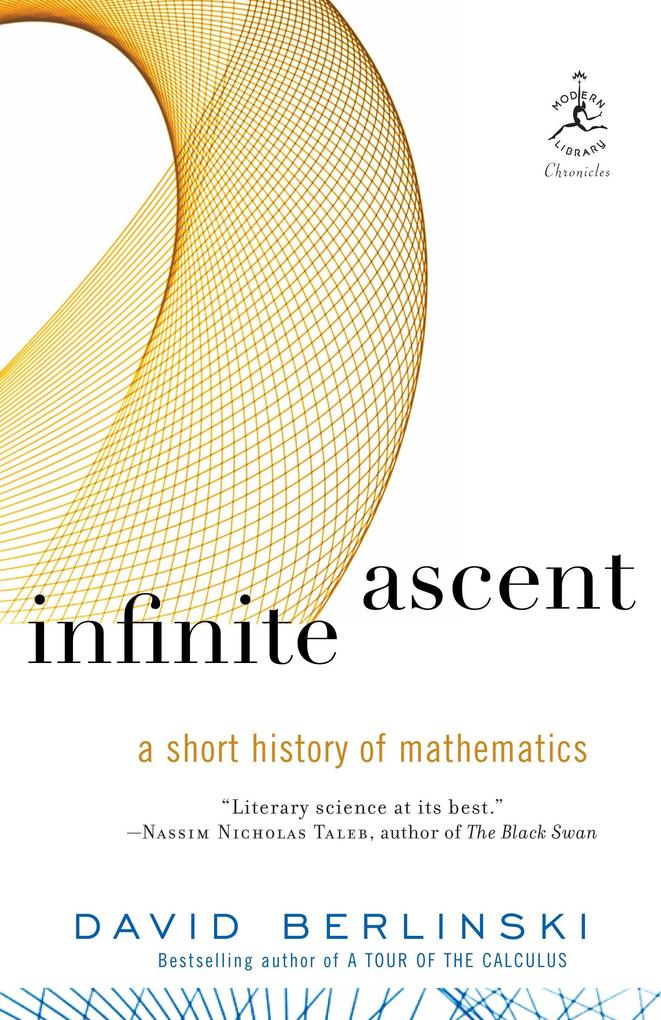 12% Rabatt³ sichern mit Gutscheincode: MAI12
​
The best-selling author of Advent of the Algorithm and A Tour of the Calculus traces the history of mathematics over the course of 2,500 years, profiling ten important developments and figures in math, including Pythagorus, Euclid, Descartes, Leibniz … weiterlesen
Dieser Artikel ist auch verfügbar als:
Geschenk per Mail versenden
Taschenbuch

In Infinite Ascent, David Berlinski, the acclaimed author of The Advent of the Algorithm, A Tour of the Calculus, and Newton's Gift, tells the story of mathematics, bringing to life with wit, elegance, and deep insight a 2,500-year-long intellectual adventure.

Berlinski focuses on the ten most important breakthroughs in mathematical history-and the men behind them. Here are Pythagoras, intoxicated by the mystical significance of numbers; Euclid, who gave the world the very idea of a proof; Leibniz and Newton, co-discoverers of the calculus; Cantor, master of the infinite; and Gödel, who in one magnificent proof placed everything in doubt.

The elaboration of mathematical knowledge has meant nothing less than the unfolding of human consciousness itself. With his unmatched ability to make abstract ideas concrete and approachable, Berlinski both tells an engrossing tale and introduces us to the full power of what surely ranks as one of the greatest of all human endeavors.

David Berlinski received his Ph.D. from Princeton University and has taught mathematics, philosophy, and English at Stanford, Rutgers, the University of Puget Sound, and the Université de Paris at Jussieu. He has been a research fellow at both the International Institute for Applied Systems Analysis in Austria and the Institut des Hautes Études Scientifiques in France. His many books have been translated into more than a dozen European and Asian languages. His essays in Commentary have become famous. A senior fellow at the Discovery Institute in Seattle, he lives and works in Paris.

"For mathematically challenged folk like me, David Berlinski comes again to help with a thin volume that, like his A Tour of the Calculus, renders mathematics not easy, but accessible and absorbing. He portrays through history how mathematical thought evolved, from the genius of the few to its application by the many. Personalities, times, cultures, and opportunities all play their dramatic roles and Berlinski, knowing how they interacted, brings them vividly to life. You'll enjoy yourself."
-Paul McHugh, Distinguished Service Professor of Psychiatry, Johns Hopkins University

"This is literary science at its best. I was charmed by this top-down and introspective presentation of the subject of mathematics. It is not just highly readable; because it is one step above the subject, it can even inspire the professional."
-Nassim Nicholas Taleb, Dean's Professor in the Sciences of Uncertainty, University of Massachusetts at Amherst, author of Fooled by Randomness

"A humorous and graceful short history of mathematics, quite deceptively easy to read. Berlinski is actually a sophisticated insider, and every page of this book glows with his love of mathematics and with his sardonic appreciation for humanity's foibles."
-Gregory Chaitin, IBM Thomas J. Watson Research Center, author of Meta Math! The Quest for Omega
Kunden, die diesen Artikel gekauft haben, kauften auch