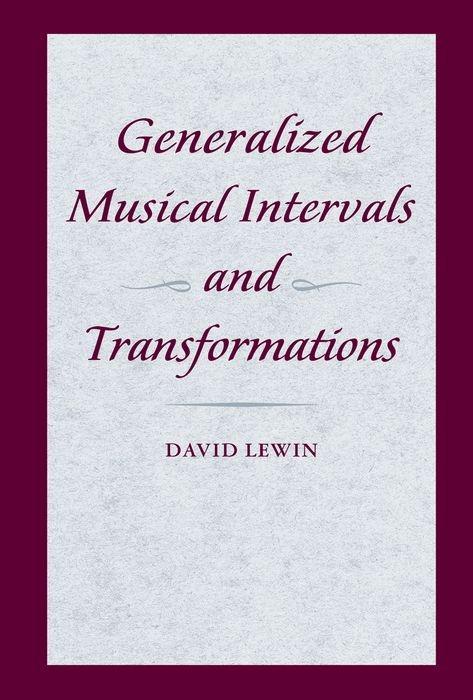 von David Lewin
120 musical examples. Sprache: Englisch.
Taschenbuch
Generalized Musical Intervals and Transformations is by far the most significant contribution to the field of systematic music theory in the last half-century, generating the framework for the "transformational theory" movement.

Generalized Musical Intervals and Transformations is by far the most significant contribution to the field of systematic music theory in the last half-century, generating the framework for the "transformational theory" movement.

Over his 42-year teaching career, David Lewin (1933-2003) taught composition, with an increasing focus on music theory, at the University of California at Berkeley, the State University of New York at Stony Brook, Yale University, and finally at Harvard University. Among his music-theoretic writings are many articles and books, including Musical Form and Transformation (Yale, 1993), which received an ASCAP Deems Taylor Award, and Studies in Music with Text (posthumous, Oxford 2006). He was the recipient of honorary doctoral degrees from the University of Chicago, the New England Conservatory of Music, and the Marc Bloch University, Strasbourg, France, for his work in music theory.

"Generalized Musical Intervals and Transformations, David Lewin's masterpiece, has prompted a twenty-year efflorescence in the field of mathematical and systematic music theory. GMIT leads readers to the head of a series of distinct paths, suggests by example where each path leads, and leaves readers to their own explorations. Many music theorists now spend their careers working out different aspects of the vision presented here; there is plenty and enough to go around."-Richard L. Cohn, Battell Professor of the Theory of Music, Yale University"David Lewin's great gift was his ability to connect sophisticated mathematics to musical experience in ways that were deeply compelling, never losing sight of either the music, or the experience. Together these two volumes display both his theoretical brilliance and his sensitivity to the individuality of musical works. Most significantly, they are imbued with his unflagging dedication to and abiding love for the acts of making and understanding music."--Andrew Mead, Professor of Music, University of Michigan"Lewin was a revolutionary thinker, and GMIT is a revolutionary book."--Journal of the American Musicological Society"David Lewin's work is among the most important on music theory in the twentieth century. Through some of the examples of practical applications, Generalized Musical Intervals and Transformations was the inception and theoretical basis of the 'Neo-Riemannian' strand of tonal music theory. In addition, its transformational network analysis paradigm has become part of every music theorist's standard repertory for analysis, and has since been extended by Lewin himself, Klumpenhouwer, Lambert, Stoecker, Headlam, Rahn, and Mazzola among many others. The analytical essays in Musical Form andTransformations illustrate the new analytical paradigm Lewin introduced in Generalized Musical Intervals and Transformations. These seminal works on music theory are essential reading."-John Rahn, Prof