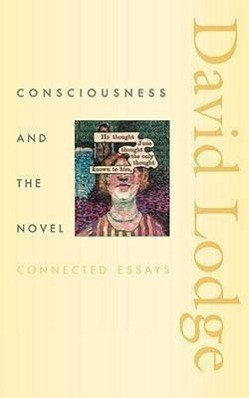 Consciousness and the Novel: Connected Essays

von David Lodge
Sprache: Englisch.
Taschenbuch
Human consciousness, long the province of literature, has lately come in for a remapping--even rediscovery--by the natural sciences, driven by developments in Artificial Intelligence, neuroscience, and evolutionary biology. As the richest record we h … weiterlesen
Geschenk per Mail versenden
Taschenbuch

Human consciousness, long the province of literature, has lately come in for a remapping--even rediscovery--by the natural sciences, driven by developments in Artificial Intelligence, neuroscience, and evolutionary biology. As the richest record we have of human consciousness, literature, David Lodge suggests, may offer a kind of understanding that is complementary, not opposed, to scientific knowledge. Writing with characteristic wit and brio, and employing the insight and acumen of a skilled novelist and critic, Lodge here explores the representation of human consciousness in fiction (mainly English and American) in light of recent investigations in the sciences. How does the novel represent consciousness? And how has this changed over time? In a series of interconnected essays, Lodge pursues these questions down various paths: How does the novel's method compare with that of other creative media such as film? How does the consciousness (and unconscious) of the creative writer do its work? And how can criticism infer the nature of this process through formal analysis? In essays on Charles Dickens, E. M. Forster, Evelyn Waugh, Kingsley and Martin Amis, Henry James, John Updike, and Philip Roth, and in reflections on his own practice as a novelist, Lodge is able to bring to light--and to engaging life--the technical, intellectual, and sometimes simply mysterious working of the creative mind.

Esteemed English novelist Lodge...explores the relationship between consciousness and literature. Intrigued by the way the very notion of consciousness seems to be evolving in an age of cyber and virtual reality, the author focuses here on a wide range of topics that offer perspective on consciousness in fiction...Lodge offers a kaleidoscopic adventure into the potentially forbidding realm of "consciousness studies," sticking with familiar elements (well-known authors and books) and skillfully breaking his larger, more amorphous ideas into digestible bits. Provocative and fascinating. Kirkus Reviews 20020801 David Lodge is ever tactful, the gentleman-as-critic. His responses to differing theories of art and consciousness are respectful, and his interest in novelists is unfailingly generous. In an age when the novel has been pronounced dead by more than one cultural observer, Mr. Lodge stands as the novelist's greatest advocate. -- Daniel Mark Epstein Washington Times 20021020 Consciousness and the Novel makes a bright, instructive introduction to David Lodge--as critic and novelist--for anyone who does not know his work. -- Kenneth Baker San Francisco Chronicle 20021103 You won't get a much more authoritative view of contemporary English literature than David Lodge's...In his latest book, Consciousness and the Novel, Lodge, fortified by learning and practice, touches on a number of issues, including the transformation of the "literary" novelist from a lonely, dedicated devotee of his craft, like James Joyce, to a candidate for international celebrity. -- Philip Marchand Toronto Star 20021030 [This] is not a book of popular science but of literary criticism. Lodge has a different set of problems in mind: "how the novel represents consciousness; how this contrasts with the way other narrative media, like film, represent it; how the consciousness, and the unconscious, of a creative writer do their work." Most other critics would make heavy weather of such topics, but Lodge always scintillates. -- George Scialabba Boston Globe 20030105 The abandonment of civilized talk about literature by the "theory" fraternity would leave us very short if it were not for the likes of Lodge, the quality of whose prose and insights, not least because they both come matured from the casks of his own vocation, is a high treat. Leave consciousness to the neurophysiologists and philosophers, and explore human experience and selfhood with Lodge and the novelists, and enjoy. -- A. C. Grayling Financial Times 20021124 [An] impressive new collection...Mr. Lodge has the ability to make familiar writers, seem new...He also writes snappish prose...Mr. Lodge here writes about fiction like a novelist and not a professor and makes his arguments like a major critic. -- Tim Marchman New York Sun 20021111 David Lodge's recent interest in neuroscience and contemporary debates about consciousness has been developed in a lively collection of lectures and essyas...If consciousness is now a central concern of philosophers and neurologists, it has been equally so for novelists ever since the end of the nineteenth century. Lodge illuminatingly develops ideas set out in his last novel, Thinks..., where he dramatized this opposition...In this book, Lodge's parallel but separate careers as novelist and critic harmoniously converge. -- Bernard Bergonzi Commonweal 20021206 This collection of essays is what we have come to expect from [Lodge]: companionable and provocative prose...Lodge's essays meander in a way that strengthens rather than weakens the reader's faith in him as a guide. We read about a wide range of texts, scientific and creative...Consciousness and the Novel brilliantly succeeds in bringing the reader into the ongoing conversation about consciousness. Above all, it reveals just why the novel remains an irreplaceable hearth at the center of the human world. -- Tom D'Evelyn Providence Journal 20030126 [Lodge's] project in Consciousness and the Novel is to affirm the value of the novel in describing or representing the human experience and to celebrate the literary intelligence that portrays human consciousness--the uniqueness each person feels when surveying the world from inside his or her own skull. What makes his writing so dynamic is that Lodge seems quite taken with the ideas about consciousness he finds in the fields of neuroscience, philosophy and cognitive and evolutionary psychology, but he is also confident that those fields have something to learn from literature...Witty, cogent and finally courageous. -- Wingate Packard Seattle Times/ Post Intelligencer 20021222 Citing the works of writers ranging from Jane Austen to John Updike, and Virginia Woolf to Philip Roth, Lodge examines how the novel represents consciousness; how such representation has changed through time; how the novelist's consciousness and unconsciousness function creatively; and what, if any, is the role of the critic's formal analysis in the process...One reason Lodge's creative and critical works are such joys to read is their sense of play...If you like being in smart company, get to know David Lodge. -- Robert Flanagan Columbus Dispatch 20030216 This book...is a visit backstage, where we can peer at the smoke and mirrors of the novelist's art...What a joy, finally, to clamber back and forth across the crumbling old chasm of arts versus sciences to contemplate such a multifaceted and defiant mystery as consciousness. -- Susan Greenfield Times Higher Education Supplement