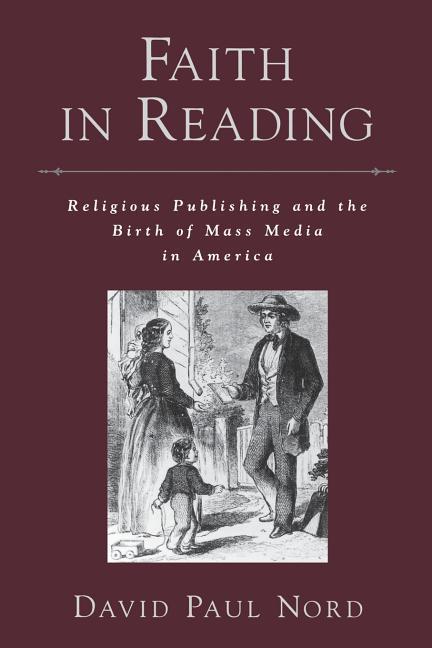 von David Paul (Professor of Journalism and American Studies, Professor of Journalis (…)
Religious Publishing and the Birth of Mass Media in America. black & white illustrations. Sprache: Englisch.
Taschenbuch
Faith in Reading tells the remarkable story of the unlikely origins of our modern media culture. In the early nineteenth century, a few visionary entrepreneurs decided the time was right to launch a true mass media in America. Though these entreprene … weiterlesen
Geschenk per Mail versenden
Jetzt nur

Faith in Reading tells the remarkable story of the unlikely origins of our modern media culture. In the early nineteenth century, a few visionary entrepreneurs decided the time was right to launch a true mass media in America. Though these entrepreneurs were savvy businessmen, their publishing enterprises were not commercial businesses but nonprofit religious organizations. These organizations believed it was possible - through new technology, nationalorganization, and the grace of God - to place the same printed message into the hands of every man, woman, and child in America. Determined to combat ignorance, apathy, and infidelity with the written word, these organizations ended up giving birth to the American mass media.

,.".a welcome addition to the developing interest in American religious history as an important element in the larger national story." --The Historian
"The volume brilliantly achieves whar it sets out to do: present a coherent institutional history and an analysis of the organizational logic of several major nonprofit religious publishers. The book makes an important contribution to scholarship in the history of the book, communications,
economics, and Protestant religious history. This volume is a significant addition to scholarship of religious publishing and economic history that deserves faithful reading." --Journal of Religion
,.".short, clearly argued book that is a valuable contribution to the study of print media." --American Historical Review
"David Paul Nord's Faith in Reading is a learned, imaginative, and deft interpretation of the innovative role that evangelical Protestants played in the development of mass communication in 19th-century America. Nord writes with economy and grace, providing an elegant account of evangelicals'
motives and methods within the larger context of the print revolution that preceded the Civil War. --Richard D. Brown, University of Connecticut
"David Paul Nord's Faith in Reading is a jewel of a book, sparkling with crystal clear prose and coruscating from each of its facets: on reading in the churches and the world, on religion and commerce, on business for mission and for profit, on slavery and voluntary societies, and much, much
more." --Mark A. Noll, author of Americas God: From Jonathan Edwards to Abraham Lincoln
"An important book, sophisticated in its reflections on the so-called market revolution anddemocratization, and for these reasons deserving the attention of everyone who studies antebellum Protestantism." --David D. Hall, Harvard University