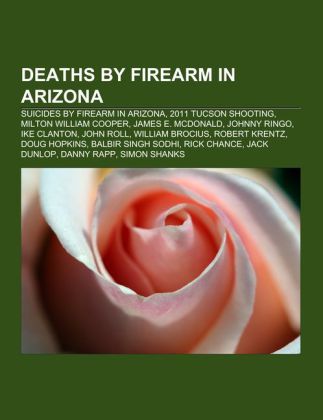 Deaths by firearm in Arizona

Titel: Deaths by firearm in Arizona

Source: Wikipedia. Pages: 24. Chapters: Suicides by firearm in Arizona, 2011 Tucson shooting, Milton William Cooper, James E. McDonald, Johnny Ringo, Ike Clanton, John Roll, William Brocius, Robert Krentz, Doug Hopkins, Balbir Singh Sodhi, Rick Chance, Jack Dunlop, Danny Rapp, Simon Shanks. Excerpt: On January 8, 2011, a mass shooting occurred near Tucson, Arizona. Nineteen people were shot, six of them fatally, with one other person injured at the scene during an open meeting that U.S. Representative Gabrielle Giffords was holding with members of her constituency in a Casas Adobes Safeway supermarket parking lot. Those killed in the incident include United States District Court for the District of Arizona Chief Judge John Roll and one of Rep. Giffords's staffers. News reports identified the target of the attack as Giffords, a Democrat representing Arizona's 8th congressional district. She was shot through the head at point-blank range, and her medical condition was initially described as "critical". A 22-year-old Tucson man, Jared Lee Loughner, was arrested at the scene. Federal prosecutors have filed five charges against him, including the attempted assassination of a member of Congress, those charges carrying the possibility of the death penalty. Court filings include notes allegedly handwritten by Loughner indicating he planned to assassinate Giffords. The motive for the shooting remains unclear, as the suspect has not cooperated with authorities and has invoked his right to remain silent. Roadside sign for the "Congress on Your Corner" constituent meeting.The shooting took place on January 8, 2011, at 10:10 am MST (UTC-7). A United States Representative from Arizona, Gabrielle Giffords, was holding a constituent meeting called "Congress on Your Corner" at the Safeway supermarket in La Toscana Village mall, which is in Casas Adobes, an unincorporated area north of Tucson, Arizona. Giffords had set up a table outside the store and about 20 to 30 people were gathered around her when the gunman drew a pistol and shot Giffords in the head. The shooting was caught on video by a store security camera. He then allegedly proceeded to fire apparently randomly at other members of the crowd. The weapon used was reported to be a 9mm Glock 19 semi-automatic pistol with
Kunden, die diesen Artikel gekauft haben, kauften auch
Schreiben Sie eine Rezension