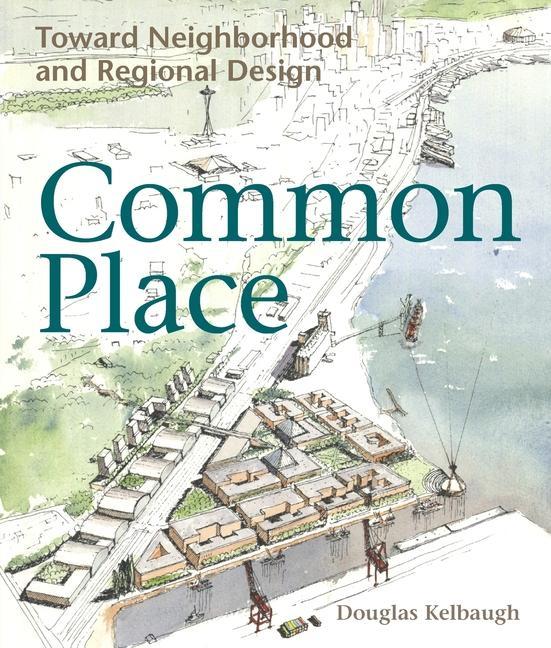 von Douglas Kelbaugh
Toward Neighborhood and Regional Design. Auflage 2. 80 photos. Sprache: Englisch.
Taschenbuch
Common Place is about how we can develop and maintain community and create convivial and sustainable places in the face of disjointed and fast-paced growth. It offers strategies for reclaiming and improving our cities, which today are increasingly do … weiterlesen
Geschenk per Mail versenden
Taschenbuch

Common Place is about how we can develop and maintain community and create convivial and sustainable places in the face of disjointed and fast-paced growth. It offers strategies for reclaiming and improving our cities, which today are increasingly dominated by fear and disintegration and the automobile. Douglas Kelbaugh offers here a personal, passionate statement of how architecture and urban design can improve our lives.At the heart of the book are summaries of eight design workshops, or charrettes, each consisting of five days of brain-storming by competing teams of University of Washington students and faculty, design professionals, and community leaders, to propose solutions to regional problems. The Seattle charrettes apply design concepts to real problems such as housing, transportation, and suburban sprawl. Thousands of hours of creative effort, led by some of the nation's foremost designers, have produced a blueprint for one region that is pertinent to other regions in the country.Kelbaugh looks at such concepts as the New Urbanism, Urban Villages, Pedestrian Pockets, and Transit-Oriented Development -- many of which he helped pioneer. He devotes chapters to the costs of sprawl, critical regionalism, architectural typology, and urban policy.Bridging academic theory and on-the-ground practice, Common Place is an indispensable book for designers, planners, city officials, developers, environmentalists, and citizens interested in understanding and shaping the American metropolis."This book is so powerful and so accessible that it will serve to inspire citizens to develop their own visions for their communities". -- Norman B. Rice, Mayor of Seattle and President of theU.S. Conference of Mayors"Here, in accessible prose, the residents of Puget Sound are offered an opportunity to study and visualize future development alternatives and their consequences. As the inexorable pressures of growth and building expansion focus on the Pacific Nort

Douglas Kelbaugh, is Dean of the College of Architecture and Urban Planning at the University of Michigan. He is former principal in Kelbaugh, Calthorpe & Associates of Seattle and Kelbaugh & Lee of Princeton, New Jersey. His design work has won more than two dozen design awards and has been published in over 100 books and periodicals.

"Doug Kelbaugh has a sparkle in his eye and a vision in his heart, but dirt under his fingernails. He is a scholar and a dreamer, but also a builder. Common Place defines the cutting edge of urban design in the real world." Denis Hayes, President and CEO, the Bullitt Foundation, and founder of Earth Day "Common Place is written with such exquisite clarity and confidence, it is easy to overlook that Doug Kelbaugh is arguing for nothing less than a fundamental reconsideration of contemporary American planning" Don Prowler, Princeton University "This is two books in one. One is the most sophisticated presentation of the New Urbanism to be found anywhere. The other describes the most remarkable series of charrettes ever applied to a city. There isn't much more that a modern planner needs to know." Andres Duany, co-founder, Congress for the New Urbanism "Many of the book's ideas have already been influential in the Seattle area. For designers and planners elsewhere, Common Place represents a valuable contribution towards development of a sustainable design vision." Stephen Wheeler, The Urban Ecologist "With an aim at interactive, creative physical designs for neighborhood, city, and region, this is a book every politician, citizen in an urban action group, and corporate manager should possess. For environmental design courses at academic institutions, it provides proactive and universal design methodologies using the great Seattle region as a laboratory." Donald Leslie Johnson, University of South Australia "There are, unfortunately, very few architects around who can touch as many bases as Doug Kelbaugh, with such authority. When you add to that his commitment to, and knowledge of, his local venue, you have a rare and potent mixture." Alan J. Plattus, Yale University, coeditor of Architecture and Urbanism