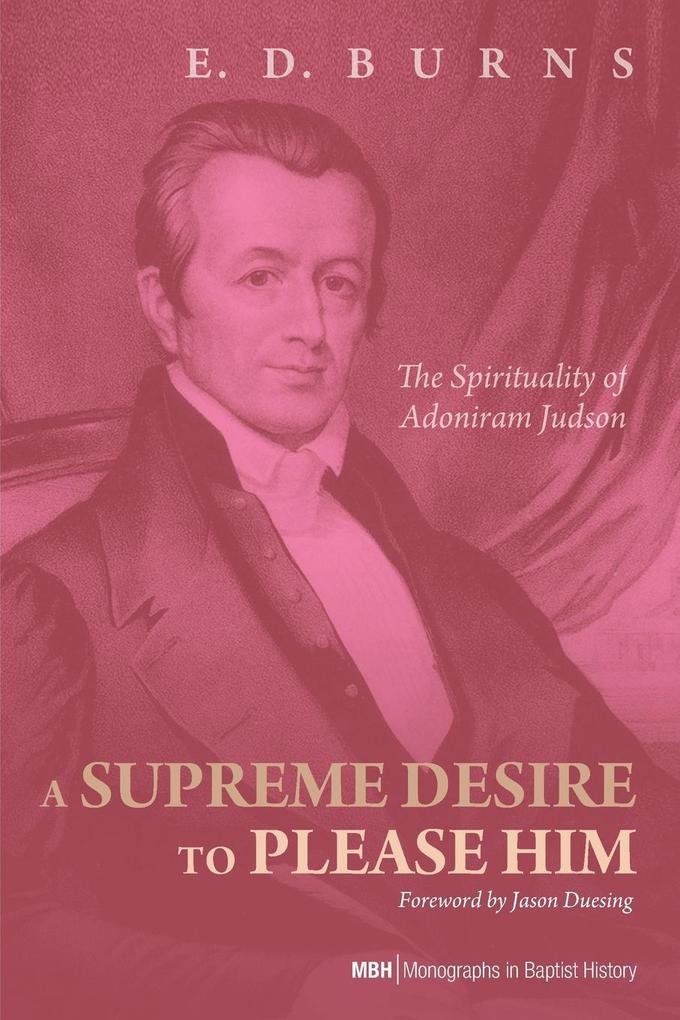 A Supreme Desire to Please Him

12% Rabatt³ sichern mit Gutscheincode: MAI12
​
Adoniram Judson was not only a historic figurehead in the first wave of foreign missionaries from the United States and a hero in his own day, but his story still wins the admiration of Christians even today. Though numerous biographies have been wri … weiterlesen
Dieser Artikel ist auch verfügbar als:
Geschenk per Mail versenden
Taschenbuch

Adoniram Judson was not only a historic figurehead in the first wave of foreign missionaries from the United States and a hero in his own day, but his story still wins the admiration of Christians even today. Though numerous biographies have been written to retell his life story in every ensuing generation, until now no single volume has sought to comprehensively synthesize and analyze the features of his theology and spiritual life. His vision of spirituality and religion certainly contained degrees of classic evangelical piety, yet his spirituality was fundamentally rooted in and ruled by a mixture of asceticism and New Divinity theology. Judson's renowned fortitude emerged out of a peculiar missionary spirituality that was bibliocentric, ascetic, heavenly minded, and Christocentric. The center of Adoniram Judson's spirituality was a heavenly minded, self-denying submission to the sovereign will of God, motivated by an affectionate desire to please Christ through obedience to his final command revealed in the Scriptures. Unveiling the heart of his missionary spirituality, Judson himself asked, ""What, then, is the prominent, all-constraining impulse that should urge us to make sacrifices in this cause?"" And he answered thus: ""A supreme desire to please him is the grand motive that should animate Christians in their missionary efforts.""

""Because Jesus Christ was Himself the ultimate missionary, a truly biblical spirituality will always incline the heart toward missions. The more Christlike a person becomes, the more burdened he or she will be for those who do not know Christ. One of the best-known and best-loved stories of this union of spirituality and missions is found in the life of Adoniram Judson. Retelling this story with particular emphasis on Judson's spirituality is Evan Burns. Who better for this task than a missionary to Judson's part of the world with a PhD in biblical spirituality? Like Judson, Dr. Burns is the real deal both as a missionary and as a man of God. Read this book and be blessed.""
--Donald S. Whitney, Professor of Biblical Spirituality, Southern Baptist Theological Seminary; author of Spiritual Disciplines for the Christian Life and Praying the Bible

""Evan Burns complements Adoniram Judson's well-known missionary accomplishments with his interior life and paints a more holistic picture of this great historical figure than ever has been portrayed thus far. Both Judson's strengths and weaknesses are revealed in this compelling narrative. This historically astute, robustly researched, and intelligently written book is a welcome and groundbreaking contribution to the scholarship about this pioneer American missionary.""
--Allen Yeh, Associate Professor of Intercultural Studies and Missiology, Cook School of Intercultural Studies, Biola University

""The early modern missionary movement was decisively shaped by a number of iconic figures: among the chief of them was Adoniram Judson. This original and incisive study of his piety helps us not only understand his life and what made him tick but also the pattern of missionary piety that came after him. A great study!""
--Michael A. G. Haykin, Professor of Church History and Biblical Spirituality, The Southern Baptist Theological Seminary

""Adoniram and Ann Judson have always been heroes to me for a host of reasons: their courage to obey the Great Commission, to explore biblical truth as it related to baptism, to act on what God showed them even at great personal cost, and to remain faithful in missions though great suffering. Evan Burns provides insightful analysis of Adoniram Judson's spiritual fortitude that enabled endurance, which I pray will spark a supreme desire to please Him among many readers.""
--M. David Sills, DMiss, Ph.D., A.P. and Faye Stone Chair of Christian Missions and Cultural Anthropology, The Southern Baptist Theological Seminary

E. D. Burns (PhD, Southern Baptist Theological Seminary) is Director of the MA in Global Leadership program at Western Seminary, where he also directs The Judson Center. He and his family have served as missionaries in the Middle East, East Asia, and most recently in Southeast Asia, where he has been on faculty at Asia Biblical Theological Seminary of Cornerstone University.