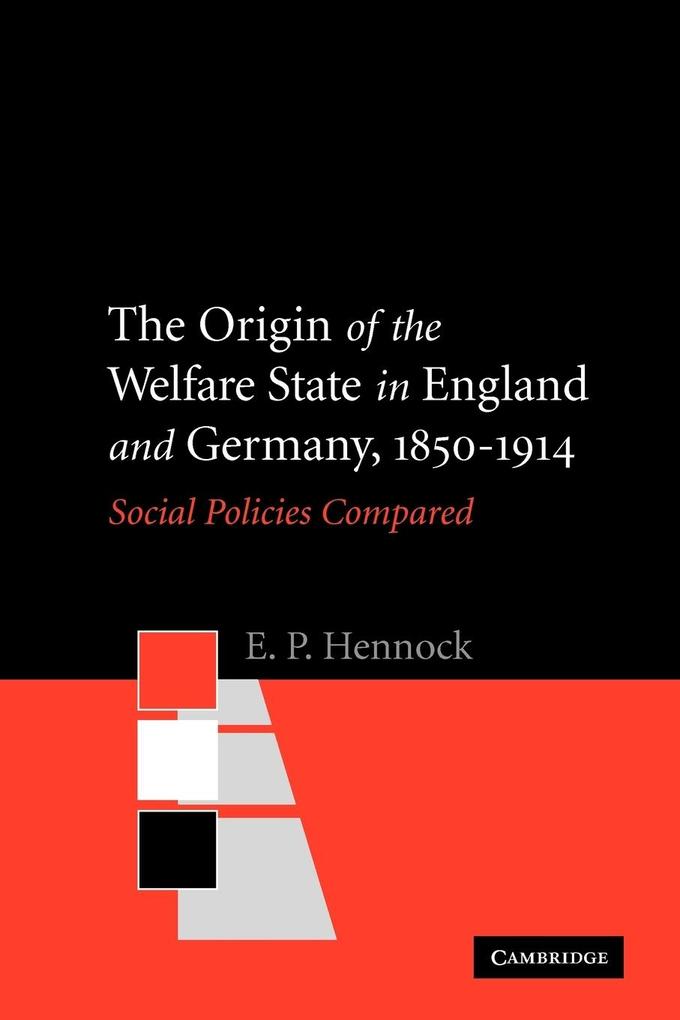 von E. P. Hennock
Social Policies Compared. Paperback. Sprache: Englisch.
Taschenbuch
A comparative study of the origin of the welfare state in England and Germany, from 1850 to 1914. It presents original conclusions about the differences between British and German approaches. Peter Hennock analyses policies on social security and the … weiterlesen
Geschenk per Mail versenden
Taschenbuch

A comparative study of the origin of the welfare state in England and Germany, from 1850 to 1914. It presents original conclusions about the differences between British and German approaches. Peter Hennock analyses policies on social security and the public provision of medical care, dealing with public poor relief, industrial injury, with sickness, invalidity and old age, and with unemployment. In each case policies in Britain and in the German Empire are compared for their actual provisions, their consequences and the politics that produced them. He demonstrates that national insurance has played a larger role in Germany than in Britain from the beginning, as it still does today, and that decisions taken before 1914 are crucial to the long-term differences between the welfare state in the two countries. The book will appeal to students and scholars of British and European political history, social history and social policy.

E. P. Hennock is Emeritus Professor of Modern History at the University of Liverpool. He has written Fit and Proper Persons: Ideal and Reality in Nineteenth Century Urban Government (1968), and British Social Reform and German Precedents: The Case of Social Insurance, 1880–1914 (1987).

'... excellent study.' Contemporary Review '... this text is a substantial addition to the historiography of the welfare state. Hennock has developed a distinctive methodology founded upon the comparative study of England and Germany, which he uses to illuminate the unique features of each.' Medical History 'E. P. Hennock's profound knowledge of the genesis of social policies in the UK and Germany has already been demonstrated in several publications, and this latest book is another fascinating contribution. ... Both social policy and comparative social policy would be seriously weakened, or even flawed, without historical contributions of the calibre provided by [Hennock's] latest volume.' Social Policy and Administration 'His style of prose is fluent and he succeeds in presenting his arguments succinctly but also convincingly.' The Historian

Schreiben Sie eine Bewertung für: The Origin of the Welfare State in England and Germany, 1850-1914