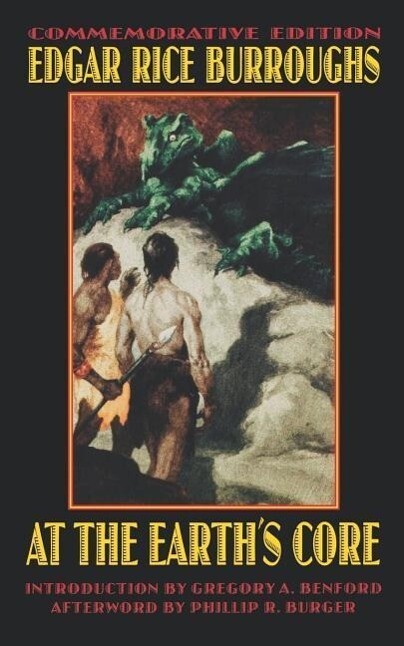 At the Earth's Core

Five hundred miles beneath the earth's surface lies a fantastic, timeless world of eternal daylight, prehistoric beasts, and primeval peoples -- Pellucidar. Pellucidar is a world within our world, a place where the horizon curves upward and merges with the sky. Here time stands still, for Pellucidar is illuminated by a miniature sun that never sets but hovers motionless in the sky. Scattered throughout the savage, prehistoric wilderness are communities of distrustful humans and the cities of the reptilian, highly evolved Mahars. David Innes and Abner Perry break through into this mysterious inner world. Their discovery of Pellucidar and the ensuing struggle to unite the human communities and overthrow the Mahars is a top-notch, thrilling tale of conquest, deceit, and wonder. This commemorative edition features an introduction by Gregory A. Benford and an afterword on the science of At the Earth's Core by Phillip R. Burger. Also included are a map of Pellucidar, a glossary of terms and names by Scott Tracy Griffin, a contemporary review, and the classic J. Allen St. John illustrations.

Edgar Rice Burroughs (1875-1950) is the legendary author of dozens of novels, including "The Land That Time Forgot," also available in a Bison Frontiers of Imagination edition. Gregory A. Benford is a celebrated science fiction writer and a professor of physics at the University of California, Irvine. His most recent novel is "Cosm." Phillip R. Burger is associate editor of "The Burroughs Bulletin."

" ... first serialized in All Story Weekly, this is one of the minor pulp-magazine classics of pre-Gernsbackian SF. Burger's afterword is particularly well-informed, and interesting; these attractively-produced Bison Books reprints of early sf are building into a collectable series."--interzone, June 2000

Taschenbuch
The Nightmare and Other Tales of Dark…
von Francis Stevens

Taschenbuch
A Journey in Other Worlds: A Romance of…
von John Jacob Astor