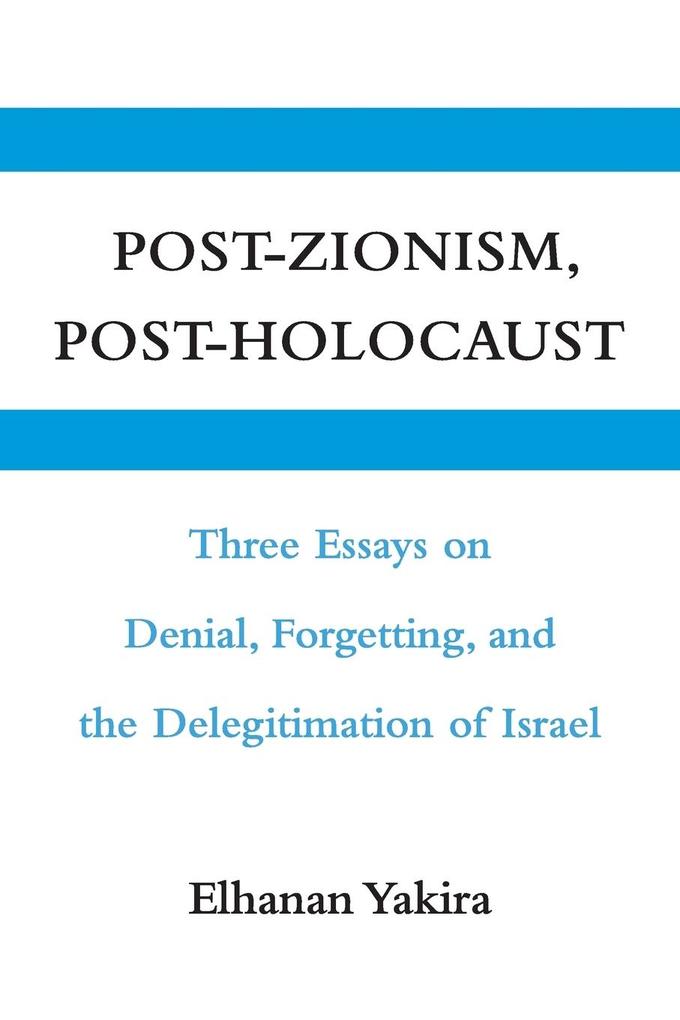 von Elhanan Yakira
Paperback. Sprache: Englisch.
Taschenbuch
This book contains three essays, available in English for the first time, that examine three forms of anti-Zionism and their use of the Holocaust to delegitimize Israel.

This book contains three essays, available in English for the first time, that examine three forms of anti-Zionism and their use of the Holocaust to delegitimize Israel.

Preface; 1. Holocaust denial and the left; 2. The Holocaust and the good Israelis; 3. On the political and the anti-political: Hannah Arendt, Eichmann, and Israel; 4. Post-script: 1. '67 or '48?; Appendix of biographical notes.

'A book that has immense learning and moral and political passion in equal measure. Professor Yakira takes us deep into that consuming debate between Zionists and post-Zionists. Luminous intellectual history. His study of Hannah Arendt's Eichmann in Jerusalem, and its legacy, is a brilliant piece of criticism. A timely and courageous book.' Fouad Ajami, The Johns Hopkins University 'What strikes one most in Elhanan Yakira's Post-Zionism, Post-Holocaust is both courage and clarity. A philosopher by training, this Hebrew University scholar uses his sharp chisel in order to analyse three intertwined issues: the theories of the French left-wing Holocaust deniers, the misuse of the Holocaust by Israeli post-Zionists, and the manipulation of Hannah Arendt's views regarding European Jewry during the Holocaust. Yakira takes the reader on a stage by stage intellectual journey, in the course of which he demonstrates how without any scholarly honest research his protagonists use the Holocaust as a political tool to delegitimize the Zionist movement and Israel. Here is a loud and sane voice that calls upon every thinking person to reconsider ill-based theories and accusations before they take center stage.' Dina Porat, Tel Aviv University 'Elhanan Yakira has made an original and profound contribution to the debates between pro and post Zionists and between mainstreamers and holocaust deniers. Most importantly he has exposed the link between some French left wing intellectuals and holocaust denial; how their opposition to the Jewish state has led them to try to undermine one of the cardinal justifications for its foundation. His skills as a Francophone student of philosophy have been fully exploited to provide the reader with an innovative, insightful study of a major contemporary issue.' Itamar Rabinovich, Tel Aviv University and New York University 'This excellent translation makes an important and controversial critique of post-Zionist arguments available for the first time to an English-speaking audience. Elhanan Yakira is an engaging writer, and readers will certainly find themselves pulled into the debate. This is a brilliant, disturbing, provocative, and engrossing book.' Michael Walzer, Institute for Advanced Study