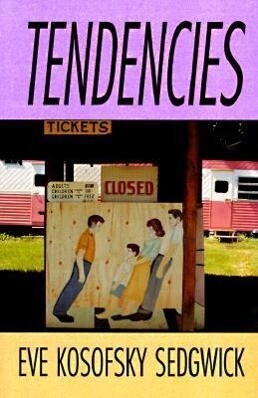 "Tendencies" brings together for the first time the essays that have made Eve Kosofsky Sedgwick "the soft-spoken queen of gay studies" ("Rolling Stone"). Combining poetry, wit, polemic, and dazzling scholarship with memorial and autobiography, these essays have set new standards of passion and truthfulness for current theoretical writing.
The essays range from Diderot, Oscar Wilde, and Henry James to queer kids and twelve-step programs; from "Jane Austen and the Masturbating Girl" to a performance piece on Divine written with Michael Moon; from political correctness and the poetics of spanking to the experience of breast cancer in a world ravaged and reshaped by AIDS. What unites "Tendencies" is a vision of a new queer politics and thought that, however demanding and dangerous, can also be intent, inclusive, writerly, physical, and sometimes giddily fun.

Eve Kosofsky Sedgwick is Distinguished Professor of English, CUNY Graduate Center. Her many publications include "A Dialogue On Love" (Beacon, 1999); "Fat Art/Thin Art "(Duke, 1994); "Tendencies" (Duke, 1993); and "Epistemology of the Closet" (California, 1990).

"Eve Kosofsky Sedgwick is deservedly recognised as the "primum mobile" of lesbian & gay studies. Yet her real achievement lies not so much in the creation of a new academic discipline, as in the profound implications her work carries for the rest of the academy, and the wider world beyond. For she assigns an absolutely fundamental, constitutive role to homophobia in the construction of Modernity, and its myriad institutions, discourses, pleasures, and pains. "Tendencies" provides a marvelously exhilarating excursion across the range of her interests and involvements. . . . She is the most consistently intelligent, courageous, perceptive, daring and sensible critic currently writing in the United States. I strongly recommend panic-buying."--Simon Watney, author of "Policing Desire"

Taschenbuch
After Sex?: On Writing Since Queer Theory