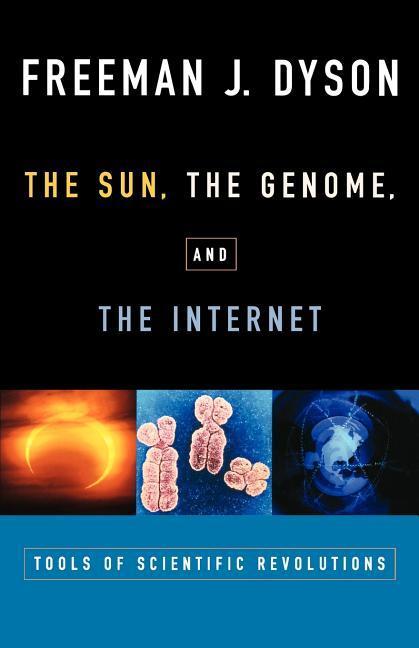 The Sun, the Genome, and the Internet: Tools of Scientific Revolutions

von Freeman J. Dyson
Sprache: Englisch.
Taschenbuch
A visionary and optimistic look at the future, and how three new technologies might lead to a more equal distribution of wealth. Winner of the 1999 Templeton Prize.

Titel: The Sun, the Genome, and the Internet: Tools of Scientific Revolutions
Autor/en: Freeman J. Dyson

A visionary and optimistic look at the future, and how three new technologies might lead to a more equal distribution of wealth. Winner of the 1999 Templeton Prize.

Freeman Dyson is Professor Emeritus of Physics at the Institute of Advanced Study, Princeton University. His previous books include Distrubing the Universe, Infinite in All Directions, and Weapons and Hope. He is the recipient of the National Book Critics Circle Award and the Phi Beta Kappa Award in science.

"Writing with great passion and compassion of his view of solar energy, genetics, and the Internet, Dyson shows how each fits into an ethical science of the 21st century. Anyone who believes that science and a happier, more equitable world are incompatible must read this book." --John L. Casti, Santa Fe Institute, Santa Fe, NM, author of The Cambridge Quintet and Paradigms Lost
"There could be no better guide to what the new century and millennium may hold than Freeman Dyson, who bring a rare lucidity and humanity, along with wide-ranging scientific and historical intelligence, to everything he writes. In The Sun, the Genome, and the Internet Dyson considers the potential impact of new scientific and technological advances on individual lives and on society in general; it is a most engaging and important book, as accessible as it is profound."--Oliver Sacks, M.D.
"Freeman Dyson, a legendary figure in the sciences, has given us a thoughtful and thought-provoking glimpse into the 21st century. In his lyrical and erudite style, he paints a vivid portrait of the technologies which will touch our lives in the next century. The Sun, the Genome, and the Internet is a must-read for anyone who wants a sneak preview into the future. Only Dyson could weave together this rich tapestry, blending ethics, ideology, science, and technology into a coherent vision of the future. --Michio Kaku, author of Hyperspace and Visions: How Science Will Revolutionize the 21stCentury, and Professor of Theoretical Physics, City University of New York
"This slim volume grew out of a series of lectures at the New York Public Library, a format that has served Dyson will appeal to a general audience not yet exposed to the newest research in neuroscience. Public libraries will be well served by this book." --Laurie Bartolini, MacMurray Coll. Lib., Springfield, Il.
"In a discussion of the search for primitive life in the universe, he takes the reader from contemplating the

Schreiben Sie eine Bewertung für: The Sun, the Genome, and the Internet: Tools of Scientific Revolutions