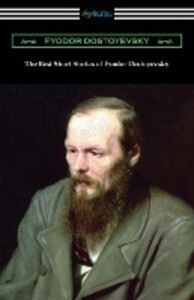 After a brief military career, the illustrious Russian author Fyodor Dostoyevsky quickly turned to writing as a profession with the publication of his first novel, "Poor Folk" in 1846. This novel sparked a literary career that would eventually cement Dostoyevsky's reputation as one of the greatest novelists of the nineteenth century. Early participation in a literary political group landed the writer in exile in Siberia for nearly a decade, an experience which had a profound influence on Dostoyevsky's understanding of fate, the suffering of human beings, and resulted in a powerful religious conversion experience. Dostoyevsky's works are marked by his penetrating exploration of psychology and morality and today he is considered one of the most important "existentialist" writers. This representative collection of Dostoyevsky's short stories spans his impressive career and includes such classics as "White Nights", a heartbreaking tale of loss; the famous "Notes from the Underground", an important work of guilt and cynicism; and "The Honest Thief", which centers on a sad criminal who cannot resist committing crimes. Also included in the this collection are "A Christmas Tree and a Wedding", "The Peasant Marey", "A Faint Heart", and "The Dream of a Ridiculous Man". This edition follows the translations of Constance Garnett and is printed on premium acid-free paper.

Fyodor Mikhailovich Dostoevsky[a] (11 November 1821 - 9 February 1881), sometimes transliterated Dostoyevsky, was a Russian novelist, short story writer, essayist, journalist and philosopher. Dostoevsky's literary works explore human psychology in the troubled political, social, and spiritual atmospheres of 19th-century Russia, and engage with a variety of philosophical and religious themes. His most acclaimed works include Crime and Punishment (1866), The Idiot (1869), Demons (1872), and The Brothers Karamazov (1880). Dostoevsky's body of works consists of 11 novels, three novellas, 17 short stories, and numerous other works. Many literary critics rate him as one of the greatest psychologists in world literature.[3] His 1864 novella Notes from Underground is considered to be one of the first works of existentialist literature.
Born in Moscow in 1821, Dostoevsky was introduced to literature at an early age through fairy tales and legends, and through books by Russian and foreign authors. His mother died in 1837 when he was 15, and around the same time, he left school to enter the Nikolayev Military Engineering Institute. After graduating, he worked as an engineer and briefly enjoyed a lavish lifestyle, translating books to earn extra money. In the mid-1840s he wrote his first novel, Poor Folk, which gained him entry into St. Petersburg's literary circles. Arrested in 1849 for belonging to a literary group that discussed banned books critical of Tsarist Russia, he was sentenced to death but the sentence was commuted at the last moment. He spent four years in a Siberian prison camp, followed by six years of compulsory military service in exile. In the following years, Dostoevsky worked as a journalist, publishing and editing several magazines of his own and later A Writer's Diary, a collection of his writings. He began to travel around western Europe and developed a gambling addiction, which led to financial hardship. For a time, he had to beg for money, but he eventually became one of the most widely read and highly regarded Russian writers.