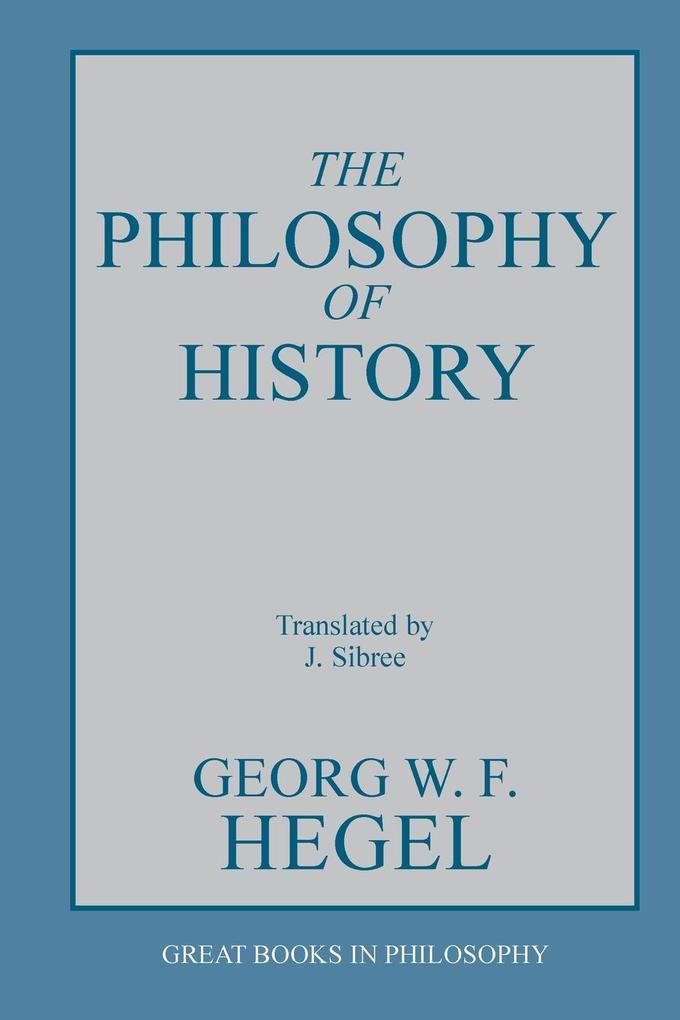 The Philosophy of History

Hegel draws upon many of his well-known concepts - Mi … weiterlesen

Hegel's Philosophy of History stands as a fascinating example of this influential German thinker's efforts to capture the multidimensional character of reality within a broad theoretical framework.

Hegel draws upon many of his well-known concepts - Mind, Spirit, dialectical method (thesis-negation-synthesis), the relation of the whole to its parts, and how rational human beings relate to that which transcends their individuality. History is the evolution of freedom as societies and cultures acquire a greater awareness of, and appreciation for, the interaction of individuals with the rational goals and purposes of the greater whole, and how rationality emerges, evolves, and develops through the dynamic relationship of each individual citizen's will with that of the community at large.

Hegel first focuses on the various ways in which history can be comprehended and then turns his attention to the Oriental, Greek, Roman, and German worlds to demonstrate how the human community dialectically evolves through these various historical periods, with each disclosing its own facet of the will that frees citizens to grasp their special place in society.

GEORG WILHELM FRIEDRICH HEGEL was born in Stuttgart on August 27, 1770, and during his early life the world witnessed revolutions in America and France as well as the following of Germany's Romantic movement. Born in the same year as Hegel were Friedrich Hölderlin, Germany's greatest lyric poet, and the composer Ludwig van Beethoven.

After graduating from Stuttgart's Latin School, Hegel entered the University of Tübingen to study the Greek classics and theology. Hegel's theological studies decisively shaped the development of his philosophical outlook. One of his earliest works, The Life of Jesus (1795), stressed the ethics of Christ's teaching while rejecting divine miracles. Later, in The Spirit of Christianity (1799), Hegel spoke as a mystic expressing his vision in philosophical rather than theo­logical terms.
Central to Hegel's philosophy was the concept of the Geist, or spirit-a term inspired by Hegel's theological training. This spirit is a real, concrete, objective force that remains one, yet is par­ticularized as spirits of specific nations and impersonated in particular individuals as the Weltgeist, or World Spirit.

In the Hegelian philosophy of the world, history occupies a special place, for it is in history that the World Spirit progresses toward self-consciousness. This is seen by Hegel as the gradual realization of freedom, from that of a single leader in the autocratic governments of antiquity to the liberty enjoyed by all in modern constitutional systems. Hegel asserted that this process of the development and realization of the spirit was the justification of God in history. Hegel's Philosophy of History, based on a series of lectures delivered in 1822 and later, was compiled and published posthu­mously by his son. It confers upon leaders of nations a position of absolute freedom: whatever they consider necessary to realize their nation's world-historical mission is justified. Hegel's ideas had a profound influence, for better or worse, on later philosophers, notably Karl Marx who, in the preface to the second edition of Das Kapital, called himself "a pupil of that mighty thinker," although Marx's materialism contrasted dramatically with Hegel's idealism. The Hegelian concept of the dialectic was, however, to be a funda­mental component of Marxism.

Georg Friedrich Hegel's other works include The Phenome­nology of the Spirit (1807), The Encyclopedia of the Philosophical Sciences (1817), and Philosophy of Right and Law (1820). He died in Berlin on November 14, 1831.