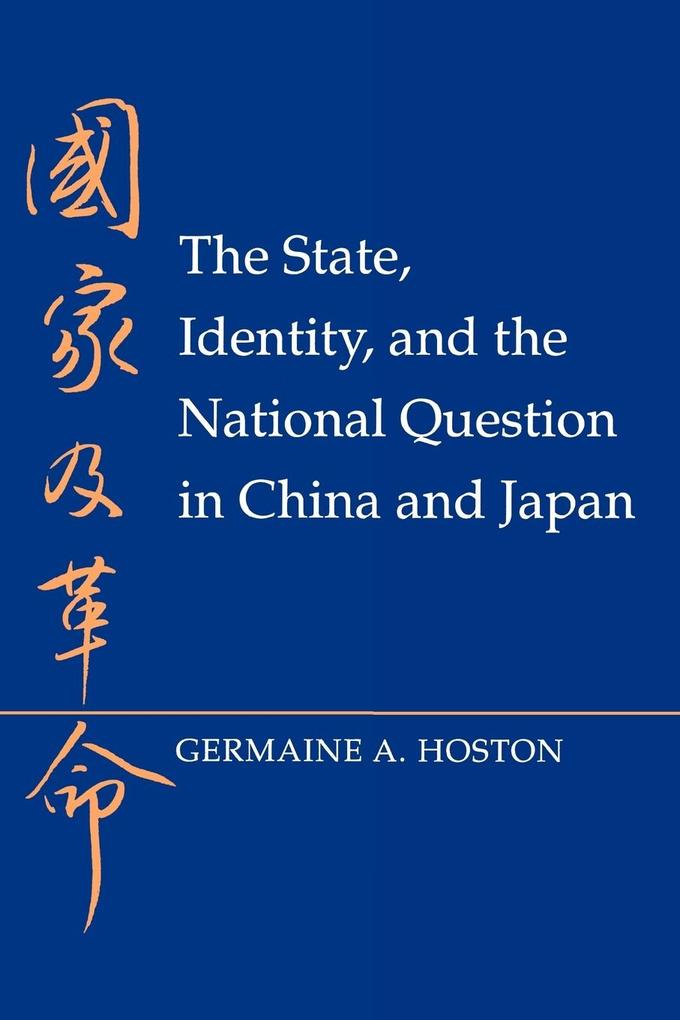 The State, Identity, and the National Question in China and Japan

12% Rabatt³ sichern mit Gutscheincode: MAI12
​
The first decades of the twentieth century witnessed an explosion of nationalist sentiment in East Asia, as in Europe. This comprehensive work explores how radical Chinese and Japanese thinkers committed to social change in this turbulent era address … weiterlesen
Geschenk per Mail versenden
Taschenbuch

Titel: The State, Identity, and the National Question in China and Japan
Autor/en: Germaine A. Hoston

The first decades of the twentieth century witnessed an explosion of nationalist sentiment in East Asia, as in Europe. This comprehensive work explores how radical Chinese and Japanese thinkers committed to social change in this turbulent era addressed issues concerning national identity, social revolution, and the role of the national state in achieving socio-economic development. Focusing on the adaptation of anarchism and then Marxism-Leninism to non-European contexts, Germaine Hoston shows how Chinese and Japanese theorists attempted to reconcile a relatively new appreciation for the nation-state with their allegiance to a vision of internationalist socialist revolution culminating in stateless socialism.

Given the influence of Western experience on Marxism, Chinese and Japanese theorists found the Marxian national question to be not merely one of whether the "working man has no country," but rather the much more fundamental issue of the relative value of Eastern and Western cultures. Marxism, argues Hoston, thus placed native Marxists in tension with their own heritage and national identity. The author traces efforts to resolve this tension throughout the first half of the twentieth century, and concludes by examining how the tension persists, as Chinese and Japanese dissidents seek identity-affirming modernity in accordance with the Western democratic model.

<TR>Preface<TR>Introduction: Identity, the National Question, and Revolutionary Change in China and Japan3<TR>Ch. 1Marxism, Revolution, and the National Question18<TR>Pt. 1The National Question and the Political Theory of Marxism in Asia43<TR>Ch. 2The National Question and Problems in the Marxist Theory of the State45<TR>Ch. 3The Encounter: Indigenous Perspectives and the Introduction of Marxism84<TR>Pt. 2Anarchism, Nationalism, and the Challenge of Bolshevism125<TR>Ch. 4Anarchism, Populism, and Early Marxian Socialism127<TR>Ch. 5Nationalism and the Path to Bolshevism175<TR>Pt. 3History, the State, and Revolutionary Change: Marxist Analyses of the Chinese and Japanese States219<TR>Ch. 6State, Nation, and the National Question in the Debate on Japanese Capitalism221<TR>Ch. 7National Identity and the State in the Controversy on Chinese Social History273<TR>Pt. 4Outcomes: The Reconciliation of Marxism With National Identity326<TR>Ch. 8Tenko: Emperor, State, and Marxian National Socialism in Showa Japan327<TR>Ch. 9Mao and the Chinese Synthesis of Nationalism, Stateness, and Marxism361<TR>Ch. 10Marxism, Nationalism, and Late Industrialization: Conclusions and Epilogue402<TR>Notes445<TR>Select Bibliography535<TR>Index609

[Hoston] analyzes the reception of Marxism as it spread to east Asia, focusing on the persistent tension between the socialist internationalism that underpinned it and enduring nationalism in China and Japan . . . [She] enhances our understanding of the Japanese left on the eve of the Second World War.

Schreiben Sie eine Bewertung für: The State, Identity, and the National Question in China and Japan