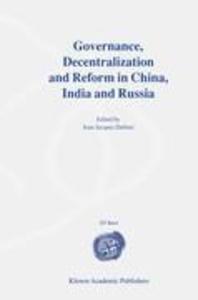 Governance, Decentralization and Reform in China, India and Russia

Softcover reprint of hardcover 1st ed. 2000. Paperback. Sprache: Englisch.
Taschenbuch
The papers in Governance, Decentralization and Reform in China, India and Russia, which were presented at a ZEF conference in May 1999, deal with three critical aspects of governance in China, India, and Russia: political reforms at the local leve … weiterlesen
Geschenk per Mail versenden
Taschenbuch

Titel: Governance, Decentralization and Reform in China, India and Russia

The papers in Governance, Decentralization and Reform in China, India and Russia, which were presented at a ZEF conference in May 1999, deal with three critical aspects of governance in China, India, and Russia: political reforms at the local level; fiscal reforms in intergovernmental relations; and legal reforms. The volume collects contributions from 24 outstanding economists, political scientists and legal specialists including Vito Tanzi, Daniel Treisman, Pranab Bardham, Jean Drèze, Katharina Pistor and Kathryn Hendley. Distorted economic and political incentive structures, capture of the state by powerful élites and inoperative legal systems are factors that have greatly complicated the political economy of reform in these three large countries with heterogeneous populations. Addressing these political and institutional issues is essential to designing good policies. One particular goal of this volume is to bring together new analytical insights and empirical evidence on governance, a new and growing field of research. The volume is divided into three parts: fiscal federalism; decentralization and provision of local public goods; and legal reforms. Part I discusses the role of incentives in fiscal federalism. The papers analyze the effects of different revenue-sharing mechanisms between different levels of government, in particular the effects on regional growth and inequality and the incentives that local politicians may have to provide public goods depending on fiscal arrangements with the central government. In adapting their governance structures, all three countries have been striving for increased decentralization. But the theoretical literature suggests that, in a decentralized setting, second-best solutions must prevail: it is not possible to ensure incentive compatibility simultaneously with optimal allocation of resources and a balanced budget in providing public goods. Part II discusses taxation and public expenditure management both as a political and as a budgetary process. Two questions which the papers address are: Does participation of stakeholders and accountability of public authorities improve economic and social outcomes? Does better governance in the provision of basic goods such as health care and education improve equity? While decentralization is often seen as a way to improve the quality of public services, rule-based governance is viewed as a safeguard against the arbitrariness of public officials and weaknesses in law enforcement. The five papers in Part III focus on the rule of law; the role of the judicial system in establishing a rule-based economy; and the effectiveness of legal institutions during the transition from socialism to a market economy. They present overviews of current legal reform issues in the three countries and discuss various conceptual approaches to addressing legal reform issues.

Jean-Jacques Dethier has a law degree from the University of Liège, Belgium, and a Ph.D. in Economics from the University of California, Berkeley. He was a senior fellow at ZEF in 1998-99, on leave from the World Bank where he works on public finance and governance issues. Since 1990, he has worked on transition economies. He recently published with L. Bokros, `Public Finance Reform during the Transition: The Experience of Hungary'. He has also extensive work experience in several countries in Africa, the Middle East and Latin America.
Kunden, die diesen Artikel gekauft haben, kauften auch
Schreiben Sie eine Rezension