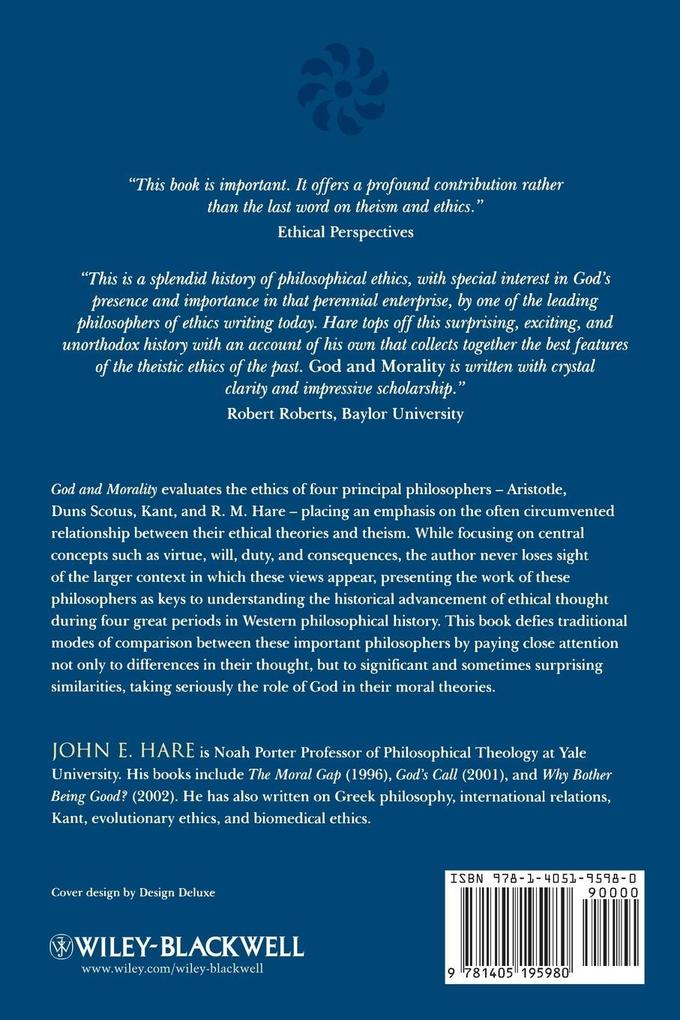 "God and Morality" evaluates the ethical theories of four principle philosophers, Aristotle, Duns Scotus, Kant, and R.M. Hare. Uses their thinking as the basis for telling the story of the history and development of ethical thought more broadlyFocuses specifically on their writings on virtue, will, duty, and consequenceConcentrates on the theistic beliefs to highlight continuity of philosophical thought

Introduction. 1. Aristotle. The School of Athens. The Protretpicus. God and Nous in Nicomachean Ethics Book I. The First Sentence of the Nicomachean Ethics. Heading towards the Good Virtue. Larry Arnhart. 2. Duns Scotus. The Disputa. Duns Scotus, Lectura. The Two Affections of the Will. Justice and God. Scotus and Virtue. Scotus and Particularity. Jean-Paul Sartre. 3. Immanuel Kant. The Time Between. Kant, Lectures on Ethics (Collins). The Groundwork. The Critique of Practical Reason. Religion. Metaphysics of Morals. Christine Korsgaard. 4. R. M. Hare. The Time Between. "An Essay on Monism". The Language of Morals. Freedom and Reason. Moral Thinking. Peter Singer. 5. Combining the Theories. The Goal of the Chapter. Virtue Theory. Command Theory. Consequentialism. Bibliography. Index of Biblical References. General Index.

John E. Hare is Noah Porter Professor of Philosophical Theology at Yale University. His books include The Moral Gap (1996), God's Call (2001), and Why Bother Being Good? (2002). He has also written on Greek philosophy, international relations, Kant, evolutionary ethics, and biomedical ethics.

"This book is important. It offers a profound contribution rather than the last word on theism and ethics" Ethical Perspectives "This is a splendid history of philosophical ethics, with special interest in God's presence and importance in that perennial enterprise, by one of the leading philosophers of ethics writing today. Hare tops off this surprising, exciting, and unorthodox history with an account of his own that collects together the best features of the theistic ethics of the past. God and Morality is written with crystal clarity and impressive scholarship." Robert Roberts, Baylor University