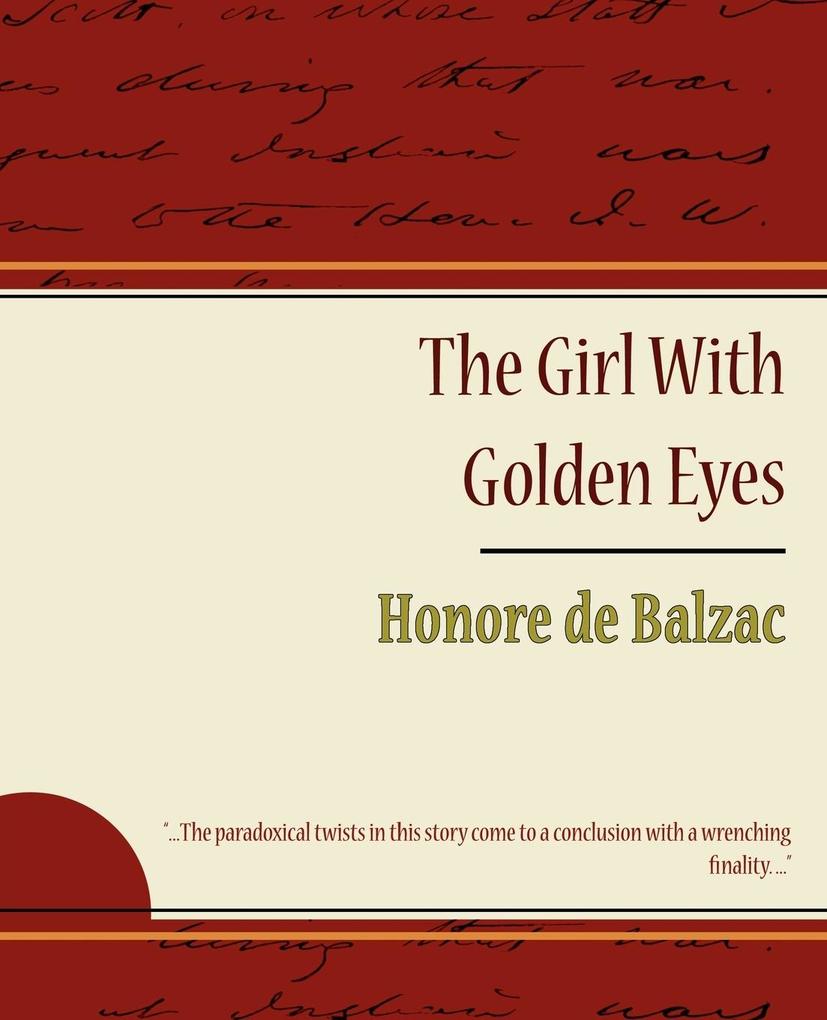 von Honore de Balzac, Honore De Balzac
Paperback. Sprache: Englisch.
Taschenbuch
The Girl with the Golden Eyes is part of the History of the Thirteen trilogy written by Honora de Balzac. Balzac was the first writer to write about the social scene France. The introduction tells of urban and economic life in Paris. The story is s … weiterlesen
Geschenk per Mail versenden
Taschenbuch

The Girl with the Golden Eyes is part of the History of the Thirteen trilogy written by Honora de Balzac. Balzac was the first writer to write about the social scene France. The introduction tells of urban and economic life in Paris. The story is set is a fine mansion on the Rue Saint-Lazare, where a man becomes obsessed with a beautiful woman. The paradoxical twists in this story come to a conclusion with a wrenching finality.

Honoré de Balzac (born, 20 May 1799 - 18 August 1850) was a French novelist and playwright. His magnum opus was a sequence of short stories and novels collectively entitled La Comédie Humaine, which presents a panorama of French life in the years after the 1815 Fall of Napoleon Bonaparte.

Owing to his keen observation of detail and unfiltered representation of society, Balzac is regarded as one of the founders of realism in European literature. He is renowned for his multi-faceted characters; even his lesser characters are complex, morally ambiguous and fully human. Inanimate objects are imbued with character as well; the city of Paris, a backdrop for much of his writing, takes on many human qualities. His writing influenced many famous writers, including the novelists Émile Zola, Charles Dickens, Gustave Flaubert, Jack Kerouac and Henry James, as well as important philosophers such as Friedrich Engels. Many of Balzac's works have been made into films, and they continue to inspire other writers.

An enthusiastic reader and independent thinker as a child, Balzac had trouble adapting to the teaching style of his grammar school. His willful nature caused trouble throughout his life and frustrated his ambitions to succeed in the world of business. When he finished school, Balzac was apprenticed in a law office, but he turned his back on the study of law after wearying of its inhumanity and banal routine. Before and during his career as a writer, he attempted to be a publisher, printer, businessman, critic, and politician; he failed in all of these efforts. La Comédie Humaine reflects his real-life difficulties, and includes scenes from his own experience.

Balzac suffered from health problems throughout his life, possibly due to his intense writing schedule. His relationship with his family was often strained by financial and personal drama, and he lost more than one friend over critical reviews. In 1850, Balzac married Ewelina Hanska, a Polish aristocrat and his longtime love; he died in Paris five months later.
Bio from Wikipedia, the free encyclopedia. Photo by Louis-Auguste Bisson [Public domain], via Wikimedia Commons.