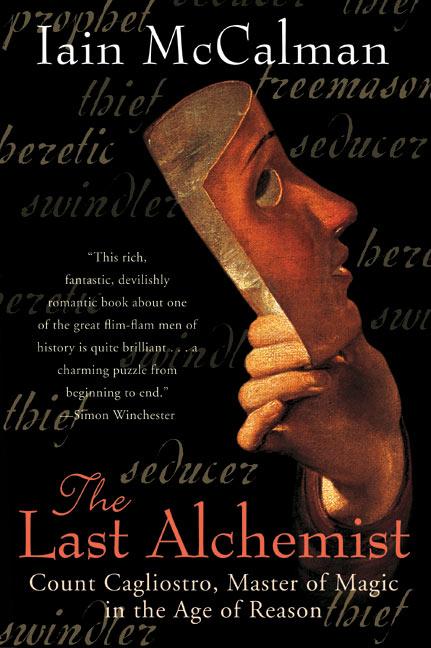 The Last Alchemist: Count Cagliostro, Master of Magic in the Age of Reason

von Iain McCalman
Sprache: Englisch.
Taschenbuch
Freemason ... Shaman ... Prophet ... Seducer ... Swindler ... Thief ... Heretic
Who was the mysterious Count Cagliostro?
Depending on whom you ask, he was either a great healer or a dangerous charlatan. Internationally acclaimed historian Iain McCalman … weiterlesen

Freemason ... Shaman ... Prophet ... Seducer ... Swindler ... Thief ... Heretic
Who was the mysterious Count Cagliostro?
Depending on whom you ask, he was either a great healer or a dangerous charlatan. Internationally acclaimed historian Iain McCalman documents how Cagliostro crossed paths -- and often swords -- with the likes of Catherine the Great, Marie Antoinette, and Pope Pius VI. He was a muse to William Blake and the inspiration for both Mozart's Magic Flute and Goethe's Faust. Louis XVI had him thrown into the Bastille for his alleged involvement in what would come to be known as "the affair of the necklace." Yet in London, Warsaw, and St. Petersburg, he established "healing clinics" for the poorest of the poor, and his dexterity in the worlds of alchemy and spiritualism won him acclaim among the nobility across Europe.
Also the leader of an exotic brand of Freemasonry, Count Cagliostro was indisputably one of the most influential and notorious figures of the latter eighteenth century, overcoming poverty and an ignoble birth to become the darling -- and bane -- of upper-crust Europe.

Iain McCalman was born in Nyasaland (now Malawi) in Africa in 1947. Although a third-generation African - his family is descended in part from Australians who fought with the Australian Light Horse in the Boer War - McCalman grew up knowing he would eventually have to leave Africa. His father, a Kenyan-raised British civil servant, "was very liberal for his time", says McCalman. "He always told us European colonials were caretakers, not owners, and we'd have to go one day. It really irritated my sister and me. Africa was our home. But he never bought property, always prepared us to leave."
At around the age of sixteen he began writing: "My first publication was an article in the Rhodesia Herald on early Portuguese exploration of the lands that now include Zimbabwe." McCalman says he grew up in Africa "in a context where people around me believed in magic, and I felt sympathy with that without it penetrating my own beliefs". This, he believes, was an advantage in writing about Cagliostro's life and work.
He migrated to Australia, where he completed his BA Hons in History and MA at Canberra's Australian National University, and his PhD at Melbourne's Monash University. He has worked in many Australian and overseas universities, and has received awards for his teaching and scholarship, most recently the Federation Centenary medal in 2002. Currently President of the Australian Academy of the Humanities, McCalman became a Professor in History in 1994 and Director of the Humanities Research Centre at ANU a year later. He is currently a Federation Fellow at the ANU - one of the few humanities recipients - and will use the fellowship to research a multi-media project on the "moving picture spectacles" of 18th-century painter (and key Cagliostro enemy) Philip de Loutherborg, and a history of the impact of spectacular Australian landscapes on scientists in Darwin's age.
Iain McCalman specializes in eighteenth-century and early-nineteenth British and European cultural history and has a particular interest in popular culture and "low life".
Along with his many academic achievements, McCalman has developed an interest in the uses of other media for history and has been active in developing collaborative projects linking university-based research to the work of other cultural institutions, and recently was a historical consultant for and participant in the television series The Ship, a re-enactment of Cook's Endeavour voyage. "I had to snatch my reading during occasional interludes between climbing 140 feet up the rigging, sleeping like a fruit bat in a hammock, and crunching on hard tack biscuits and sauerkraut," he says of the journey, and admits it was a little bit "Big Brother at sea".
He is also writing a travel-book cum political memoir called The Gun in the Lake, based on his early life and experiences in Nyasaland.