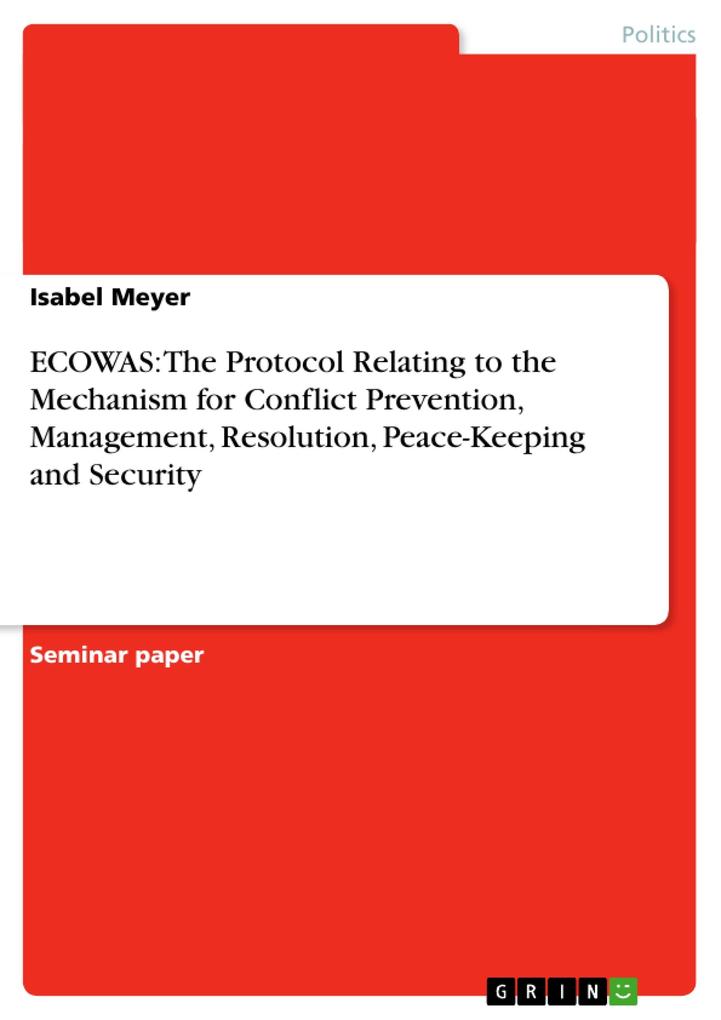 ECOWAS: The Protocol Relating to the Mechanism for Conflict Prevention, Management, Resolution, Peace-Keeping and…

Seminar paper from the year 2009 in the subject Politics - International Politics - Topic: Peace and Conflict Studies, Security, grade: 2,0, University of Duisburg-Essen, course: Seminar "International Relations and Conflict Management in Sub-Saharan Africa", language: English, abstract: Almost ten years ago, on 10 December 1999, the Economic Community of West African States (ECOWAS) adopted the Protocol Relating to the Mechanism for Conflict Prevention, Management, Resolution, Peace-Keeping and Security and hence passed "probably (...) the most ambitious instrument on the regulation of collective security ever attempted to date" (Abass 2000: 212). After three military interventions in the 1990ies ECOWAS, a purely economically intended community at the beginning, was in need of better legal foundations for its missions. The interventions in Liberia, Sierra Leone and Guinea-Bissau were largely characterized by political disputes mostly between anglophone and francophone members of ECOWAS, by weak legal foundations and massive shortcomings in financing, training and equipping the military missions. None of the three interventions can be seen as a pure success. There is even a controversy debate whether the ECOWAS interventions might have prolonged instead of shortened the civil wars in Liberia, Sierra Leone and Guinea-Bissau (see Howe 1996). The Protocol Relating to the Mechanism for Conflict Prevention, Management, Resolution, Peace-Keeping and Security was therefore the attempt to put future ECOWAS interventions on better ground. The outcome was promising, but still bears many deficiancies. Some relate to the provisions made in the Protocol, some relate to the nature of ECOWAS. The sucess or failure of ECOWAS¿ military engagement in securing peace in the region is vital for the all-african efforts to build up regional peace-keeping powers within the framework of the African Union and furthermore for the decentralization of the peacekeeping efforts of the United Nations. If ECOWAS found a way to manage matters of peace and security at its own this could be a encouraging example for other regions in the world. Reality however shows a different picture. The present paper wants to examine how succesful exactly ECOWAS was in creating the Protocol Relating to the Mechanism for Conflict Prevention, Management, Resolution, Peace-Keeping and Security (in the following short "the Mechanism") and to what extent the Mechanism can be a solution to the failures made at prior military interventions. For this purpose in the following the ECOWAS intervention in the Liberian civil war in 1990 will be examined against the background of earlier ECOWAS protocols and the against the Mechanism.