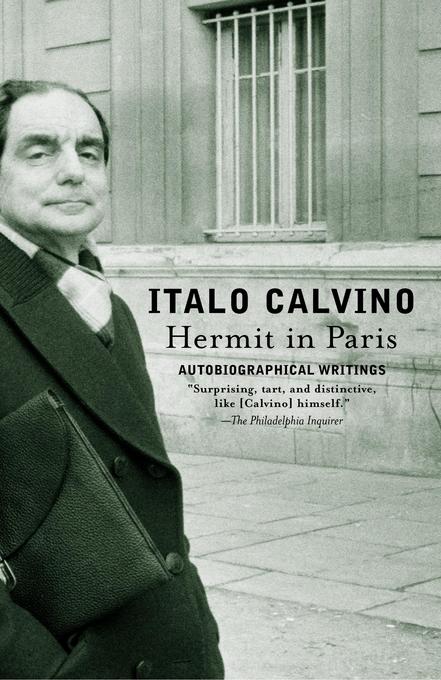 From one of modern literature's most captivating and elusive masters comes a posthumous volume of thoughtful, elegant, and quick-witted autobiographical writings, all previously unpublished in English. Here is Italo Calvino paying homage to his literary influences and tracing the evolution of his signature style. Here are his reminiscences of Italy's antifascist resistance and the frenzy of politics and ideas of the postwar era.

The longest and most delightfully revealing section of the book is Calvino's diary of his travels in the United States in 1959 and 1960, which show him marveling at color TV, wrinkling his nose at the Beats, and reeling at the outpouring of racial hatred attending a civil rights demonstration in Alabama. Overflowing with insight and amusement, Hermit in Paris is an invaluable addition to the Calvino legacy.

Italo Calvino (1923—1985) was born in Cuba and grew up in San Remo, Italy. He was a member of the partisan movement during the German occupation of northern Italy in World War II. The novel that resulted from that experience, published in English as The Path to the Nest of Spiders, won widespread acclaim. His other works of fiction include The Baron in the Trees, The Castle of Crossed Destinies, Cosmicomics, Difficult Loves, If on a Winter's Night a Traveler, Invisible Cities, Marcovaldo, Mr. Palomar, The Nonexistent Knight & the Cloven Viscount, t zero, Under the Jaguar Sun, The Watcher and Other Stories, and Numbers in the Dark. His works of nonfiction include include The Road to San Giovanni and Six Memos for the Next Millennium.