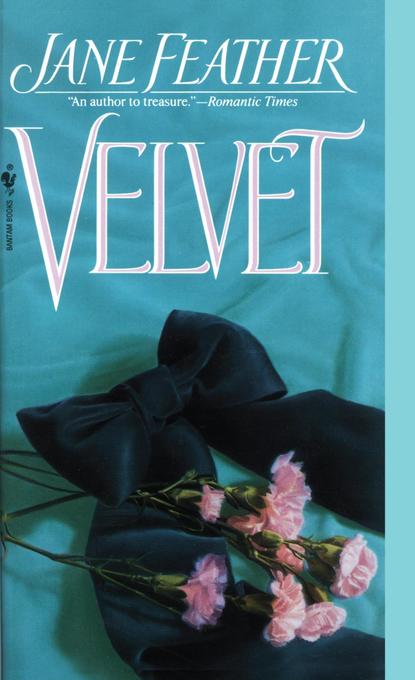 From the bestselling, award-winning author of Vanity and Violet comes a lush adventure as darkly sensual as velvet.

Clad in black velvet and posing as a widowed French comtesse, Gabrielle de Beaucaire had returned to England for one purpose only-to ruin the man responsible for her young lover's death. But convincing the forbidding Nathaniel Praed, England's greatest spymaster, that she would make the perfect agent for his secret service would not be easy. And even after Gabrielle had lured the devastatingly attractive lord to her bed, she would have to contend with his distrust-and with the unexpected hunger that his merest touch aroused.

From the moment he met her, Nathaniel Praed knew that the alluring Gabrielle de Beaucaire spelled trouble. But though he fought her outrageously bold advances, he could not stem the turbulent hunger that swept through him when the tall, titian-haired vixen pressed her lips to his. Now, against his better judgment, she is in his employ. And as Europe trembles at a tyrant's war and sinister minds plot against them, Nathaniel and Gabrielle find themselves at the mercy of an exquisite passion . . . and a love that could save-or destroy-both of their lives.

Jane Feather is the New York Times bestselling, award-winning author of Almost a Bride, The Wedding Game, The Bride Hunt, The Bachelor List, Kissed by Shadows, To Kiss a Spy, The Widow's Kiss, The Least Likely Bride, The Accidental Bride, The Hostage Bride, A Valentine Wedding, The Emerald Swan, and many other historical romances. She was born in Cairo, Egypt, and grew up in the New Forest, in the South of England. She began her writing career after she and her family moved to Washington, D.C., in 1981. She now has more than ten million copies of her books in print.