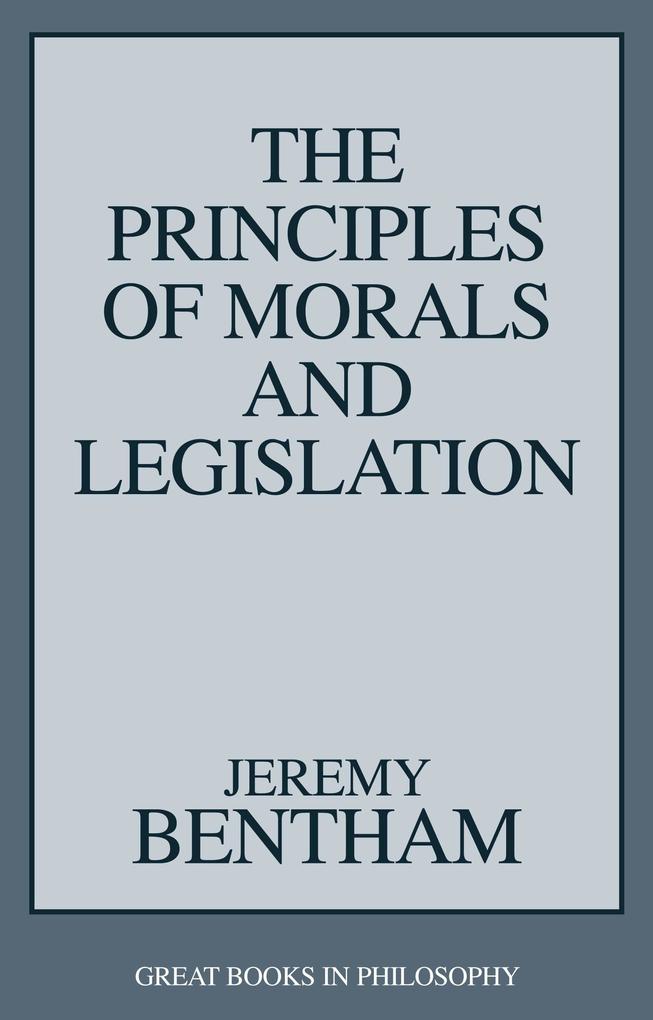 The Principles of Morals and Legislation

von Jeremy Bentham
Sprache: Englisch.
Taschenbuch
Jeremy Bentham's work on The Principles of Morals and Legislation emerges from its historic roots in hedonism and teleology as a scientific attempt to assess the moral content of human action by focusing on its results or consequences. Proceeding fro … weiterlesen
Geschenk per Mail versenden
Taschenbuch

Titel: The Principles of Morals and Legislation
Autor/en: Jeremy Bentham

Jeremy Bentham's work on The Principles of Morals and Legislation emerges from its historic roots in hedonism and teleology as a scientific attempt to assess the moral content of human action by focusing on its results or consequences. Proceeding from the assumption that human beings desire pleasure (and avoid pain), Bentham's unique perspective, known as utilitarianism, is used to construct a fascinating calculus for determining which action to perform when confronted with situations requiring moral decision-makingthe goal of which is to arrive at the "greatest happiness of the greatest number." Toward this end, he endeavors to delineate the sources and kinds of pleasure and pain and how they can be measured when assessing one's moral options. Bentham supports his arguments with discussions of intentionality, consciousness, motives, and dispositions.

Bentham concludes this groundbreaking work with an analysis of punishment: its purpose and the proper role that law and jurisprudence should play in its determination and implementation. Here we find Bentham as social reformer seeking to resolve the tension that inevitably exists when the concerns of the many conflict with individual freedom.

The Principles of Morals and Legislation offers readers the rare opportunity to experience one of the great works of moral philosophy, a volume that has influenced the course of ethical theory for over a century.

JEREMY BENTHAM was born in London on February 15, 1748, to a family of comfortable means. His was the life of a child prodigy who read Latin at three years of age and at twelve was enrolled in Oxford University, where he received his undergraduate degree at the age of sixteen. Thereafter, he studied law at Lincoln's Inn, Westminster. Inheritances from his parents afforded Bentham the opportunity to pursue a life of study and writing. While in his mid-forties, he dedicated himself to the critical analysis and reform of moral, political, religious, legal, educational, and economic institutions as they existed in England.

Though he found the judicial system to be hypocritical and corrupt, Bentham's fascination with the fundamental ideals of the law steered him toward philosophy and science in an effort to develop standards that could ground the social order. His reformist tendencies proved to be a significant factor in the development of his now famous system of ethics known as utilitarianism, wherein human action was to be judged by the amount of pleasure and pain it produced.

Bentham's published works include: A Fragment on Govern­ment (1776), An Introduction to the Principles of Morals and Legislation (1781), The Rationale of Judicial Evidence (edited by John Stuart Mill in 1825), and two volumes on Constitutional Code (ca. 1830). Bentham died in London on June 16, 1832.

Taschenbuch
On the Nature of Things
von Titus Lucretius …

Taschenbuch
The Wisdom of Life and Counsels and…
von Arthur Schopenha…