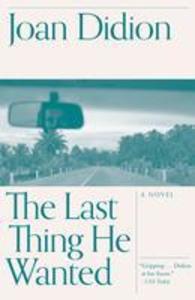 The Last Thing He Wanted

von Joan Didion
Sprache: Englisch.
Taschenbuch
In this novel the author trains her eye on the far frontiers of the Monroe Doctrine, where history dissolves into conspiracy (Dallas in 1963, Iran Contra in 1984).In that latter year Elena McMahon walks off the presidential campaign she has been cove … weiterlesen
Dieser Artikel ist auch verfügbar als:
Geschenk per Mail versenden
Jetzt nur

This intricate, fast-paced story, whose many scenes and details fit together like so many pieces of a jigsaw puzzle, is Didion's incisive and chilling look at a modern world where things are not working as they should and where the oblique and official language is as sinister as the events it is covering up.

The narrator introduces Elena McMahon, estranged from a life of celebrity fundraisers and from her powerful West Coast husband, Wynn Janklow, whom she has left, taking Catherine, her daughter, to become a reporter for The Washington Post. Suddenly walking off the 1984 campaign, she finds herself boarding a plane for Florida to see her father, Dick McMahon. She becomes embroiled in her Dick's business though "she had trained herself since childhood not to have any interest in what he was doing." It is from this moment that she is caught up in something much larger than she could have imagined, something that includes Ambassador-at-Large Treat Austin Morrison and Alexander Brokaw, the ambassador to an unnamed Caribbean island.

Into this startling vision of conspiracies, arms dealing, and assassinations, Didion makes connections among Dallas, Iran-Contra, and Castro, and points up how "spectral companies with high-concept names tended to interlock." As this book builds to its terrifying finish, we see the underpinnings of a dark historical underbelly. This is our system, the one "trying to create a context for democracy and getting [its] hands a little dirty in the process."

JOAN DIDION is the author of five novels and ten books of nonfiction, including The Year of Magical Thinking and Blue Nights. Born in Sacramento, California, Didion lived in New York City. She died in 2021.

"Simultaneously lucid and surreal ... the result is entrancing." The New Yorker

"Remarkable.... Didion has created a menacing world where the reader is held hostage." Los Angeles Times